The word for 'cow' and the word for 'oil' sound very similar in Chinese, but the value is far from the same. (Image: Screenshot / YouTube)

There is a well known folk story told by Chinese people. The protagonists of the story are a rich man, a fool, and an old monk. The rich man was cheap and stingy and the fool did not care much about little things.

The rich man hired a field hand named Zhang, who was honest and hardworking but not very smart. The local people called him Foolish Zhang.

The rich man once told Foolish Zhang: “If you work for me for a whole year, I’ll give you a cow.” Zhang agreed. After a year of hard work, the rich man only gave Zhang a bottle of cooking oil.

The rich man hired a field hand named Zhang, who was honest and hardworking but not very smart. (Image: Screenshot / YouTube)

Zhang said: “You promised me a cow.”

“Oh no, the payment is only a bottle of oil,” the rich man insisted.

The difference between the value of a cow and a bottle of oil was extreme. For ordinary people, they would probably argue the matter and might even end up in court.

But Foolish Zhang didn’t say anything and took the oil and left. He went to the temple and donated the bottle of oil. Foolish Zhang then returned to the rich man empty-handed.

When the rich man asked about it, Zhang said: “I took the oil and went to the temple and the monk said that I was a big donor.”

The rich man didn’t like that remark very much because he had donated a truckload of oil to the temple over the last year, but the monk only told him that he was a small donor.

The rich man rushed to the temple and found the old monk was waiting for him with a smile on his face.

When the rich man found out what Foolish Zhang had done with the oil, he went to the temple to talk to the monk. (Image: via The Epoch Times)

The old monk reached out and gently touched the area between the rich man’s two eyebrows. The rich man immediately had a clear picture in his mind: A wealthy family, many servants, and a master wearing expensive clothing sat in the center of the courtyard. The rich man saw that the master was in fact his field hand, Foolish Zhang.

At this point, the rich man heard the sound of screaming. He saw a skinny, blind donkey harnessed to a mill and a man was whipping it. When the rich man looked at the donkey closely, he found his name was on the donkey. 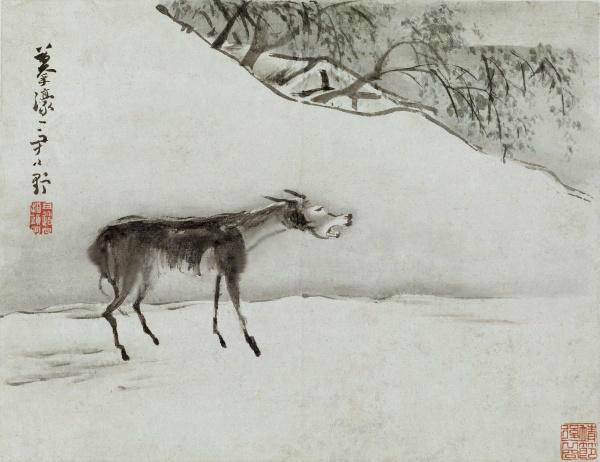 The rich man saw a skinny, blind-eyed donkey that had his name. (Image: via The Epoch Times)

The rich man was frightened and the old monk explained: “You were looking at your next life. You have been greedy and cheap in this life, so you are not entitled to reincarnate into a human being and you can only become a blind donkey to pay for your debts in your next life.

The rich man anxiously asked the old monk what he could do to alter his tragic fate. The old monk told him that it was simple — doing good deeds in this life could bring him a good life next time.

The rich man rushed back home and quickly paid Foolish Zhang the cow he had promised plus a bottle of oil as his apology.

That night, the rich man dreamed about the same scene, except this time no one was whipping the old blind donkey. The rich man woke up and determined to change his behavior. He eventually became a well-known philanthropist.

The rich man woke up determined to change his behavior and eventually became a well-known philanthropist. (Image: via The Epoch Times)

The fool, Zhang, in the above story was by no means stupid. He did not care to fight over little personal gains or losses. Chinese people believe that fortune favors fools and a fool gets a fool’s blessings.

Food Safety in Hong Kong: Tuna With Loads of Mercury

Imagine U.S. Genetic Data in the Hands of Communist China