Archaeologists think this 14-face die was used to play a game called "Liubo" that hasn't been played for 1,500 years. (Image: Chinese Cultural Relics)

In a 2,300-year-old tomb near Qingzhou City in China, archaeologists have found pieces of a board game that hasn’t been played for 1,500 years. The tomb, which has been heavily robbed, had a skeleton in a shaft within the tomb, who is suspected to be one of the grave robbers.

The 14-faced die — made from the tooth of an animal — is numbered from one to six in an ancient Chinese writing known as “seal script.” Each number has been used twice, with the remaining two faces left blank, the researchers noted.

‘Seal script’ was popular during 500 B.C. to 200 B.C., and usually has some varieties. During 221 B.C., the Qin Dynasty unified China, and written styles and measures as well. This is a standard written sample engraved in a unified iron weight for balance. c.221 B.C. (Image: Wikimedia Commons/public domain)

Archaeologists found a broken tile believed to be part of the board game. After the tile was reconstructed, it was found to be “decorated with two eyes surrounded by cloud-and-thunder patterns.” Twenty-one rectangular game pieces with numbers painted on them were also found, the archaeologists wrote in a report that has been published in the journal Chinese Cultural Relics.

Researchers believe that the artifacts belong to a lost game called “liubo” — also called “bo” — which is a mysterious board game, and they are uncertain exactly how it was played. Although, according to Scientific American, a poem that was written about 2,200 years ago by Song Yu gives some insight:

“Then, with bamboo die and ivory pieces, the game of “Liubo” is begun; sides are taken; they advance together; keenly they threaten each other. Pieces are kinged, and the scoring doubled. Shouts of ‘five white!’ arise.”

The Metropolitan Museum of Art writes that “Liubo” was a popular game in ancient China during the Han Dynasty. It was the most popular board game in the imperial court and in common circles. The game had many playing pieces, which included dice, chess pieces, a square board, and even cutting and scraping knives, according to Ancient Origins.

Even though they don’t exactly know how it was played, with the discovery of the board, its pieces, and images of people playing, the basics of the game are known. It is believed that each player moved six game pieces around the square board, and movements were determined by the roll of sticks or a die. 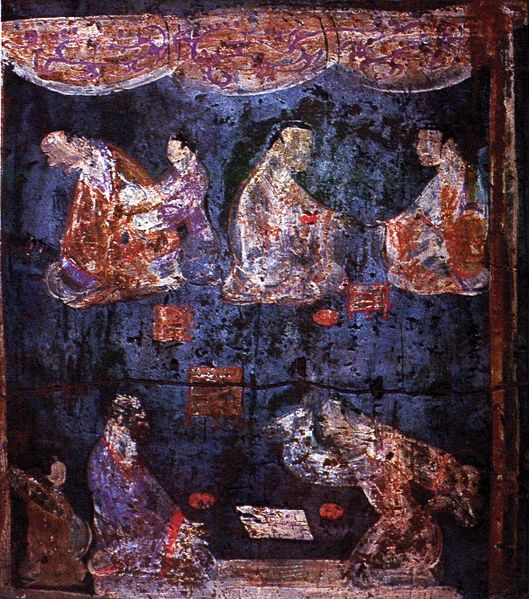 Detail of a mural from an Eastern Han tomb at Zhucun 朱村, Luoyang 洛陽, Henan Province. The two figures in the foreground are playing ‘Liubo,’ with the playing mat between them and the ‘Liubo’ board to the side of the mat. The two red, circular objects next to the ‘liubo’ board are probably intended to represent lacquer wine cups. The player on the right is taking his turn, with his right hand raised up as if about to throw down the six throwing sticks. (Image: Wikimedia Commons/public domain)

According to MetMuseum.org: “The historian, Sima Qian, (ca. 145–86 B.C.) tells a legend of a Shang Dynasty (1600–1100 B.C.) emperor who forced his subjects to play “liubo” using pieces shaped like the gods. Not daring to overcome the emperor, his opponents would let him win, and the emperor then declared he was victorious over the gods themselves.”

The tomb has two large ramps that lead to a staircase, which then descends into the burial chamber. There are five pits that hold the grave goods for the deceased, which are located beside the tomb. The tomb is about 330 feet (100 meters) long, and would have been covered with a burial mound. When the tomb was constructed, China was divided into several states that fought against each other.

The archaeologists believe that this tomb was built to bury aristocrats from the state of Qi. This was an ancient state in China that was conquered by the first emperor of China in 221 B.C. The archaeologists wrote: “Despite the huge scale of the tomb, it has been thoroughly robbed.

“The coffin chamber was almost completely dug out and robbed, suffering severe damage in the process.”

Looters dug a total of 26 shafts into the tomb, and one shaft “yielded a curled-up human skeleton, which might be the remains of one of the tomb robbers,” wrote the archaeologists. But they noted that they don’t know when this person died, why he or she was buried in the looting shaft, or the person’s age or sex.