Even with international opposition, Japanese whaling ships have now left their ports heading toward the Antarctic for their controversial whale hunt. The ships left from the port of Shimonoseki in southwestern Japan, and will be hunting whales from late December until March next year.

In 2014, the International Court of Justice (ICJ) ruled that Japan’s whale hunt did not qualify as scientific, and that it should cease. That season, Japan said it would respect the decision, and did not catch any whales.

However, Japan plans to kill 333 minke whales each year for 12 years, all in the name of ‘scientific research.’

According to the BBC: “Japan’s Fisheries Agency said on Monday that it has taken into account the ICJ’s ruling, and the hunt this season will be much smaller, aiming to catch 333 Antarctic minke whales, about one-third of what it used to kill.” 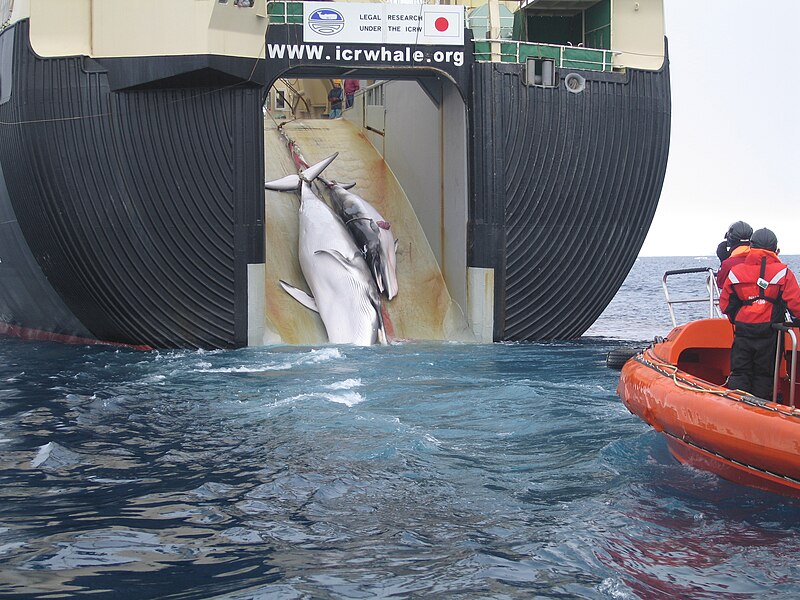 An adult and sub-adult minke whales are dragged aboard the Nisshin Maru, a Japanese whaling vessel that is the world’s only factory whaling ship. The wound that is visible on the calf’s side was reportedly caused by an explosive-packed harpoon. (Image: Australian Customs and Border Protection Service via Wikimedia Commons/CC-BY-SA-3.0)

The Japanese fleet consists of one mother ship and three other vessels. The fleet is expected to begin hunting within two to three weeks. Australia and New Zealand have voiced their opposition to the hunts, with Australian Environment Minister Greg Hunt saying in a statement: “We do not accept in any way, shape, or form the concept of killing whales for so-called “scientific research.”

“There is no need to kill whales in the name of research. Non-lethal research techniques are the most effective and efficient method of studying all cetaceans.”

Adam Burling, a spokesman from Sea Shepherd — a conservation group — said: “This is a criminal operation, and Australia has a moral, if not a legal right, to halt this. We’re in the process of potentially ordering Japanese submarines, we’re doing trade deals. This needs to be brought up with his counterpart, and it needs to be in the strongest terms,” according to Sky News.

A whale is captured by the Yushin Maru, a Japanese harpoon vessel. This image was taken by Australian customs agents in 2008, under a surveillance effort to collect evidence of indiscriminate harvesting, which is contrary to Japan’s claim that they are collecting the whales for the purpose of scientific research. In 2010, Australia filed a lawsuit in the International Court of Justice hoping to halt Japanese whaling; this photograph will undoubtedly play a key role in that pending case. (Image: Australian Customs and Border Protection Service via Wikimedia Commons/CC-BY-SA-3.0)

Sea Shepherd Australia Managing Director Jeff Hansen said: “It must be made clear to Japan that whaling in the Australian Whale Sanctuary is a criminal act, and that Australia has the international responsibility to intervene and arrest criminals operating in our waters.”

“Sea Shepherd is an anti-poaching organization. We are ready to find, document, report on, and where possible intervene against poaching operations that threaten the precious balance of life in the Southern Ocean; whatever form those poachers might take, whatever life they threaten,” Cornelissen wrote.

According to an information sheet from Japan’s Fisheries Agency and Ministry of Foreign Affairs, Japan has justified the slaughter by saying: “As there is no other means than lethal methods, at this stage, the use of lethal method is indispensable to obtain age data, which is necessary for estimating the age-at-sexual maturity (ASM), which makes considerable contribution to achieving the application of the RMP (Research Management Procedure).”

“If Sea Shepherd comes across criminal activity, then our history speaks for itself. We will, as always, directly intervene to prevent that crime from taking place,” Captain Peter Hammardstedt of Sea Shepherd said.

'Star Wars: The Force Awakens' Gets Back to Basics, Says C-3PO Actor