This is part two of an exclusive interview with journalist and author Du Bin.

I can help more people as a journalist

Reporter: Why do you like to be a reporter?

Du Bin: At first, I wrote poems, but I thought that I should not write literary things. I should be a journalist.

Here is how I become a journalist. Once I heard from a friend that there was a poor family in the countryside. The man of the family built houses for other people. Unfortunately, he fell, broke his spine, and became bedridden. His wife planted the field with four other members of the household, namely, a grandmother, two girls, and a boy. I went to their house and told them: “I don’t have the money to help you. I want to do a feature story with pictures and see if that could help you. I won’t drink your water, or eat your food. I will bring bottled water and come to visit only once.”

I sent my story to several newspapers. Later, I heard that this family had received more than 20,000 yuan in donations. In 1999, that was a lot of money. I never imagined that staying with them for a day and writing an article could really help them. I was especially proud, happy, and thought it was good to be a reporter. Since then, I have vowed to be a journalist to help more people.

But I have always been more concerned about the little guys.

During the 2008 Beijing Olympics, The New York Times gave me a certificate and asked me to go to the Olympic Stadium. I was terrified because I was a layman in sports, and in the end, they decided not to let me go.

At that time, the atmosphere was particularly tense, and people were wearing red armbands on every street. During the Olympics, I took a lot of photos, for example, migrant workers who were forced to leave Beijing at the railway station. The Olympics will be held tomorrow, so today, they rush the migrant workers out of Beijing, and they will go back home because the city of Beijing does not want them.

During the Olympics, I was more concerned about Yang Jia. His family was very close to the Olympic Games. There was a carnival there and Yang Jia was locked up inside, while his mother was missing.

On May 1, 2010, the World Expo opened in Shanghai and I published my book Shanghai Cavalry on April 27. A lot of places received a notice to check this book, such as the industrial and commercial departments of Jinan, Jiangxi, Xinjiang, etc. They were ordered by the notice to inspect for illegal publications, including my Shanghai Cavalry. I also found the notice from the courier company online.

Reporter: You work for The New York Times in the United States. If the photos taken are not welcomed by the Chinese government, will there be problems?

Du Bin: Well, in 2008, Falun Gong practitioner Yu Zhou died in a detention center in Beijing. This news was found online. At that time, Yu Zhou’s wife had been sentenced. From the Internet, we found Yu’s sister. After the contact, I took a five-inch photo of Yu Zhou and sent it to The New York Times.

Later, I heard that the Ministry of Foreign Affairs reprimanded the journalist and told him not to mention bad things about China, for example, that one could not ask for a lawyer, and that more than 3,000 Falun Gong practitioners had died from persecution.

Du Bin recording the slogan of the petitioner under the Yongding River bridge in Beijing. (Image: Epoch Times)

After the establishment of diplomatic relations between China and the United States in 1976, some journalists were stationed in China. However, monitoring was very tight as long as you were in contact with the Chinese, for example, you called the Chinese about an interview. Before you even went, the official sent someone to block you from seeing that person. So, you could not see anyone.

In 2012, there was a reporter from a television station, a Chinese-American female journalist. She did a video report on labor camps and the response was very strong. The government was not happy. In the end, the reporter was forced to leave China. Later, the English channel of that station in Beijing was closed.

I have contacted a few foreign media reporters. When I see someone or write a story, I will first examine my potential actions: Will seeing this person or writing this article make the Chinese government unhappy? Or will it be troublesome getting a visa in the future? Foreign journalists want to write good news in China to make contributions, so they are working carefully and not stepping on the CCP’s toes.

Published in 2010, the book is about the abnormal death of a nameless pawn who reveals the blackmail and brutality of the CCP. 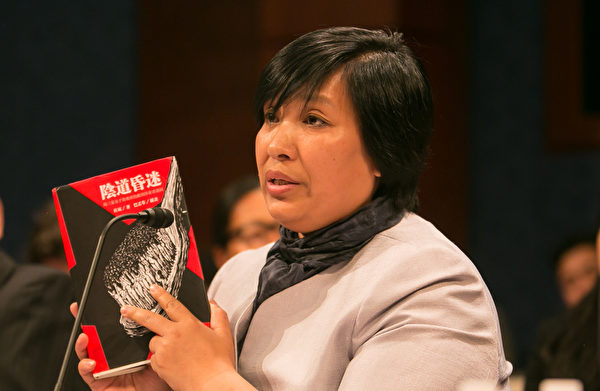 Published in 2010 in Taiwan, on the eve of the opening of the 2010 Shanghai World Expo, the book interviewed the people who were forced to become petitioners due to the forced demolition at construction sites and recorded their experiences. Du Bin wrote: “The people in power colluded with officials and businessmen. In the name of urban transformation, they removed the legitimate shelters of other people. This process of eviction helped to create the brilliant Expo.”

Published in 2011, this book reveals the historical truth of the great famine era and exposes the facts. Du Bin said: “Editing this book is to say a few words on behalf of these hungry souls.“

Published in 2013, and no one knows how many people had been eaten, dead or alive, in the era of Mao Zedong’s communist horror regime.

Published in 2013 in Hong Kong on the eve of the June 4th anniversary. Du Bin spent eight years collecting information on the events that occurred on the evening of June 3, 1989. Du Bin said: “Let the CCP know what they did that night, and let the people who are concerned about the June 4th event know what happened that night.”

Published in Hong Kong in 2014, this an account of the testimonies of torture survivors of Masanjia Women’s Labor Camp. The book records the personal experiences of torture and ill-treatment of dozens of female Falun Gong practitioners incarcerated at the labor camp. In 2000, the police in that labor camp let male prisoners gang-rape at least 18 female Falun Gong practitioners, resulting in multiple deaths, disabilities, and mental disorders.

Du Bin photographed the petitioners living in a hole under the Yongding River bridge in Beijing. (Image: Epoch Times)

Published in Hong Kong in 2015, the book describes the persecution of men in the Masanjia Labor Camp in a first-person narrative. The protagonist suffered various forms of torture and inhuman treatments between 2008 and 2011. During the production of slave labor products, he hid a letter in the Halloween decoration box that was discovered and published by a woman in Oregon in the United States four years later.

Published in Taiwan in 2017, this book is a narrative collection of historical materials. It is the true story of the liberation of Changchun in 1948 and examines how many people from Changchun died from starvation at that time.

The True Jade of He Bian