On July 9, 2015, the Chinese government began to purge human rights lawyers, activists, and legal personnel by illegally sending them to prison. This became known as the 709 crackdown. As a Beijing-based human rights lawyer who has represented people facing forced eviction for rural land demolition projects, dissidents, and a large number of Falun Gong practitioners, Wang Quanzhang was treated brutally by the authorities and was made to disappear for six months after the 709 incident. He continues to be illegally detained to this day.

His wife, Li Wenzu, has actively called on the international community to help solve the human rights crisis facing China’s lawyers since 2015.

This article is Part Two of an exclusive interview.

Reporter: Most people think that being a lawyer is a good career choice for making money.

Li Wenzu: Yes, most people think that lawyers make money, but we have no money at home (laughs). If my husband wants to make money, he will not be able to represent those sensitive cases. For example, Falun Gong practitioners pay very little money. Still, every month my husband gave us money for living expenses on time. He said: “When I have money, I will let you manage it.” Over the past year, the Justice Bureau put him under tremendous pressure. The law firm did not give him his license. He could not accept any cases for six months. I didn’t know that initially. Later, he told me that we lived on borrowed money. I felt particularly uncomfortable when I found out. I said: “Why didn’t you tell me? If you had told me, I would have saved some money, bought fewer clothes and fewer cosmetics. But you didn’t tell me. How am I supposed to know?” I blamed him for not telling me. He did not want to express it, but I know that he loves us very much and loves this family. All the difficulties were shouldered by him alone (wipes away tears).

All the difficulties were shouldered by him alone. (Image: The Epoch Times)

After the incident, several Falun Gong practitioners came to find me. They said that Wang Quanzhang represented them in the past and did not take any payment. Now, we were in need and these people wanted to help us.

I learned from my friends that when Wang Quanzhang represented a Falun Gong case, he took very little money, or even did it free of charge.

Later, I read an article where he said that anything he gets from the Falun Gong cases is more than he wants to collect. According to his words, he should do it for free, but unfortunately, he has to support his family.

Reporter: How did you feel when Wang Quanzhang was arrested?

Li Wenzu: At the end of July 2015, I received a letter from him saying that he was safe for the time being. As long as he was not at home, he would write to me from time to time. He asked me to take care of our son and not worry. At that time, I was vaguely aware that matters might be dangerous.

At 11 o’clock on the evening of July 9, he called me and said that he was in a taxi going to another city on a business trip. He said that he wanted to go to Shandong to take care of some things. In a few days, he would go back to Hubei to pick us up and return to Beijing. At that time, my son and I were staying in my hometown for more than a month.

The next morning, I called him and the phone was turned off. I was afraid that he had been in an accident, but he had begun to contact his friends and knew that Wang Yu [a colleague from the same law firm] was arrested. Then, on the 12th, CCTV news reported that my husband was suspected of committing a crime and was being detained in a criminal detention center.

For the first six months, I cried every day. I didn’t know where he was being held. I was not sure if he was alive or dead. I cried while staring at the mobile phone. I paid attention to the progress of the 709 crackdown daily on the Internet.

I went to the Beijing Lawyers firm to find Qiaoling (wife of lawyer Li Heping). We both cried that day because we were afraid. We didn’t know how our husbands were. They had been detained for a few months, and there was no news about them. It was so terrible, just like the missing lawyer, Jiang. Now, I understood how his wife felt. How can a government make a person suddenly disappear like this? How can it be so cruel? Forcing a person to disappear, how much damage can that do to hurt his wife and children, his parents, his relatives, and friends?! (Wipes away tears)

Li Wenzu (right) and Ms. Wang Qiaoling, the wife of lawyer Li Heping, who was arrested in the 709 incident, protested in front of the second branch of the Tianjin Procuratorate. (Image: The Epoch Times)

Reporter: Then, how did you become more optimistic?

Li Wenzu: Initially, I went to various places to ask for his release. At that time, there was a big haze in the sky for many days, no sun. It was snowing, I was holding my son, and his face turned purple in the freezing air. Qiaoling and I had been looking for our husbands for 12 days, but had no results. We were really desperate. (Wipes away tears)

Six months after they disappeared, our 709 family received a notice of arrest, alleging that the two men were suspected of subverting state power and were being detained in Tianjin. We were happy when we received the notice, as we finally knew that our husbands were still alive! (Laughs) The message was: “Our husbands are still alive!” After reading the notice and going home that day, I cried for a long time. I had already cried for six months. My husband still didn’t come back. What is the use of crying? Crying can’t solve the problem!

So, after picking up the arrest notice, I felt relaxed. I shouldn’t be so negative and pessimistic. I couldn’t cry every day. Since I had to face it, our family members were overwhelmed, plus the Public Security Bureau threatened us. We almost got scared off. Slowly, our family members contacted each other and began to go out to look for our husbands.

My son asked about his father every day and asked why he was still not home. (Image: The Epoch Times)

Reporter: How did you tell your son about his father?

Li Wenzu: When Quanzhang was arrested, our son was only two and a half years old. I couldn’t explain it to him. It was difficult for a two-and-a-half-year-old child to understand. My son asked about his father every day and asked why he was still not home. I said that his father was on a business trip and his work was very busy. “Daddy really misses you.”

My son knows that his father often travels, but he will always video chat with us every day. A few times my son opened my WeChat app, tried to start a chat, and then asked why Quanzhang would not answer. (Wiping tears) I went to the detention center and went to the Law Association for more than a year. I was carrying my son. I had to take him. He ran around with me, and slowly he came to understand it.

One day, my son suddenly asked me: “Mom, why is Dad in prison?” I told him: “Your father is a particularly good lawyer because he has helped a lot of people, and now the monsters took him. These monsters are particularly bad. They don’t like what your father did.” So our son said: “Oh, that’s it. Then I have to eat a good meal, sleep well, grow strong, and fight monsters with you.” I said, “Son, you are awesome!”… (Crying and wiping the tears)

Reporter: Who has helped you the most in the past year?

Li Wenzu: I remember at first, I said to Qiaoling that I could not carry this burden. At that time, Qiaoling said: “Do you think that this burden is yours alone? See how many people are helping us!” Yes, if there were no help from everyone, I could not have gone on for this long. I am very grateful to these friends who have given us assistance. There are many whom I don’t even know. Everyone is carrying it with me.

I am most grateful to the lawyers. When 709 just began, many lawyers were arrested. The whole country was terrible. In the face of this, there were still lawyers who could stand up to represent us. Our family members are particularly grateful. In the beginning, I asked my lawyers, Shandong Li Zhongwei and Xie Xiangdong, and Mr. Li went to Tianjin alone quite a few times to try to find my husband.

After a while, the authorities put pressure on them and threatened to arrest them. They were forced to back off. At that time, I was particularly scared. I didn’t have a lawyer. I did not know what to do. I was very confused and the situation was contradictory: I needed a lawyer, but no matter who I found, I was putting them at risk of being arrested and harassed. 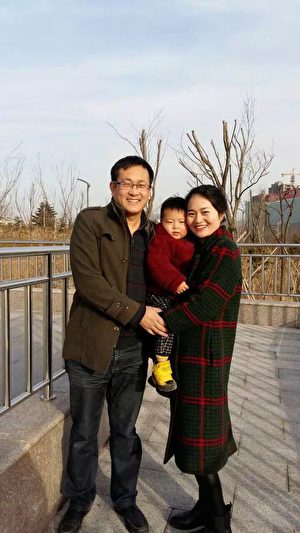 Mr. Wang Quanzhen was photographed with his wife Li Wenzu and his 2-year-old son before being arrested. (Image: The Epoch Times)

Unexpectedly, Lawyers Yu Wensheng and Wang Qiushi came forward, and I am particularly grateful! After more than a month, Wang Qiushi was arrested, and Cheng Hai took the initiative to find me, saying that he was willing to act as a full agent.

Even under high pressure, these lawyers could still make the effort to represent my husband, and their courage and responsibility are really admirable.

To be concluded in Part Three