Nowadays, adopting a child is commonplace, but here is a very moving story of one adoption of a little girl from China. Chris and Eryn, who live in the southern state of Georgia in the United States, take their two children to the park every day to play. During the holidays, they occasionally travel overseas. They are a happy family doing things together. They had a major turning point four years ago, disrupting their current situation. One day in 2015, Eryn was browsing Facebook at home during her usual rest when she noticed the adoption advocacy group updated a post, and one special little Chinese girl caught her attention.

The little girl in the photo had two blue eyes that were different from other people that she was born with. According to their understanding, the little girl had completely lost her sight and even had some problems with her hearing. If someone knew about this, they would give up the idea of adopting this child. For that reason, she was abandoned by her parents at the door of an orphanage just a few days after she was born. No one wanted to take her home.

Nowadays, adopting a child is commonplace, but here is a very moving story of one adoption of a little girl from China. (Image: Facebook)

From the first look at her photo, Eryn felt as if she could see through this little girl’s eyes and view the unfortunate experiences she had had since she was born: “When I saw the photo on Facebook, I felt an urgent and firm thought for me to take her home; I can’t tell why. It just felt like seeing everything about her. God seems to be telling me that this is our daughter, precisely because it connects us tightly together.”

They first searched for doctors everywhere, but were told not to adopt such a unique child. Although this made them struggle a bit, Chris and Eryn submitted their adoption application after waiting for the cumbersome process to be completed.

They finally received the approval for adoption in January 2016. They packed up and went to China to bring the little girl home. However, when they arrived at the orphanage, they found that she had a high fever. Chris and Eryn hurriedly took her to several hospitals for treatment, which allowed her to improve.

After this incident, the relatives and friends around Chris and Eryn actively discouraged them from adopting this little girl. After all, she has a serious congenital disease. Now her body is so weak that it is not clear if she would live. Despite knowing that adopting such a child would place a heavy burden on the family, they still signed the adoption agreement in accordance with their own inner guidance. After the little girl was in better health, they brought her back to their home in the United States. 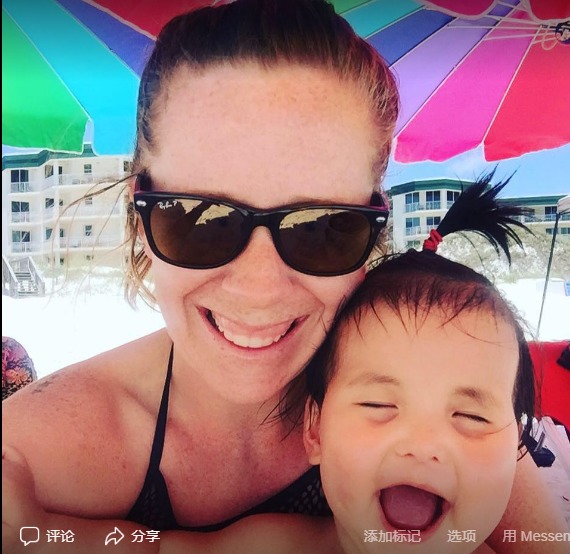 Chris and Eryn gave her the name Primrose, which means they hope she can grow up healthy. (Source: Eryn and Chris Austin Facebook)

After they came back from China, Chris and Eryn treated this little girl as their own. They called her Primrose, which means they hope she can grow up healthy. Primrose was timid when she first came to this new environment. She also did not care much for her new parents, but after Chris and Eryn patiently cared for and educated her, she gradually opened her heart, and slowly adapted and integrated into this new family while learning a lot of new skills. She and her brother and sister in the family get along very well.

Although Primrose has undergone several operations since then and her special physique needs more care than ordinary children, Chris and Eryn have always been willing to take care of her with their best efforts. Chris said: “We have been asked why we adopted a little girl knowing she is blind. Our answer is always — Why not? People feel sorry for us when they hear that Primrose is blind. But I want to say that this is not something that needs any understanding.”

12 Chinese Zodiac Signs and Their Auspicious Colors to Bring Luck