Laozi had a servant named Xu Jia. The two of them had been together for more than 200 years. But during this time, Xu Jia had been unhappy because his master failed to pay him. (Image: Public Domain)

Laozi had a servant named Xu Jia. The two of them had been together for more than 200 years. But during this time, Xu Jia had been unhappy because his master failed to pay him. He was promised a certain amount of money from the beginning, however, that promise had not been honored. He silently counted in his mind how much he should have every day before he slept. For more than 200 years, his wages totaled about 500 gold pieces.

Laozi did not do well financially during the Zhou Dynasty. Later, in the Spring and Autumn Period and the Warring States Period, it was worse, socially and politically. Laozi was planning to leave the eastern region of China and move to the west. However, the west proved even more desolate. Losing his patience, Xu Jia decided to take the matter to the governor of Hanguan.

Governor Yin Xi was busy waiting for Laozi, known as the old man on a buffalo. He wanted to kneel down to welcome Laozi and to show how much he wanted to learn about the Dao (“The Way” of spirituality). However, as soon as they arrived, Yin Xi received a complaint from Xu Jia, Laozi’s servant. 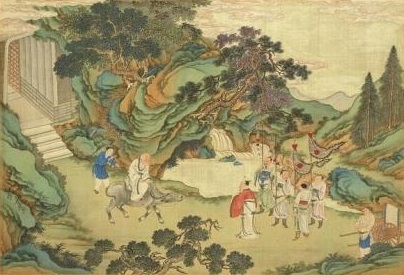 Xu Jia followed Laozi on the road, and Laozi rode the cow and went to the westbound road. (Image: Public Domain)

Thus, Laozi and Xu Jia had to face each other in a court run by the government. Well, the court agreed that Laozi had to pay his servant and that it was the right thing to do in ordinary society. Laozi asked Xu Jia to open his mouth and pull out a Taixuan Qingsheng amulet. But Xu Jia immediately died, and only his skeleton was on the floor.

Laozi sighed because he was poor and could not afford to pay his servant. He gave him a Taixuan Qingsheng amulet and promised to replace it with gold once they reached the west region. Unfortunately, Xu Jia could not wait and wanted his payment fast.

Yin Xi witnessed all of this firsthand and was shocked. He had mixed feelings. He thought: “How lucky could a person be to spend 200 years with a master like Laozi and I had to spend all my life to seek a Master.” Yin Xi knelt down to beg: “Could you let Xu Jia have his life back and I’ll pay for what you owe him?”

Laozi sighed because he was poor and could not afford to pay his servant. (Image: Flickr / CC0 2.0)

After Lao Tzu listened, he threw the Taixuan Qingsheng amulet on the body, and Xu Jia immediately resurrected. Xu Jia felt ashamed, but he thought: “I am no fool. If I could not get my wages here, then when we reach the west, where will the gold come from? I would have no place to ask for justice then.” So Xu Jia accepted a large sum of money from Yin Xi and planned to buy a house and get himself a wife. When Yin Xi handed Xu Jia more than 100 gold pieces, he left happily. When the case was over, Laozi was ready to leave and head west.

Yin Xi then became Laozi’s disciple and happily replaced Xu Jia. He went on to help Laozi record and spread the 5,000 words of the Dao De Jing. Afterward, he turned in his official government seal and followed Laozi on his journey.

When a person reads this story for the first time, they may laugh hard. What a fool Xu Jia was — he had the chance to stay with a great master, but he was thinking about buying a house and getting married! But looking back, it may no longer appear so funny. Observing the people around us, how many of us are not affected by the little gains or losses in our daily lives? We, too, are just like Xu Jia.

Translated by Yi Ming and edited by Derek Padula

Why the US Government Blacklisted China’s Huawei