During the Jin Dynasty, the beautiful Zhu Yingtai was from a scholarly and well-to-do family. Her accomplishments included excellent embroidery work and a love of reading books and writing poetry. She admired female scholars such as Ban Zhao and Cai Wenji from an early age. When Zhu was 15 years old, she saw that the boys could go to a boarding school and study with a teacher. She was extremely envious and persuaded her parents to let her dress like a boy and also go to school. So Zhu changed her appearance into one of a handsome boy and together with a little servant boy (played by her housemaid), they left home.

On a bridge, they met Liang Shanbo, a young man who was going to the same school and two years older than Zhu. Shanbo was from an ordinary family and he was loyal and pious. When the two met, they liked each other instantly. They quickly vowed to be brothers. They continued to travel onward together. 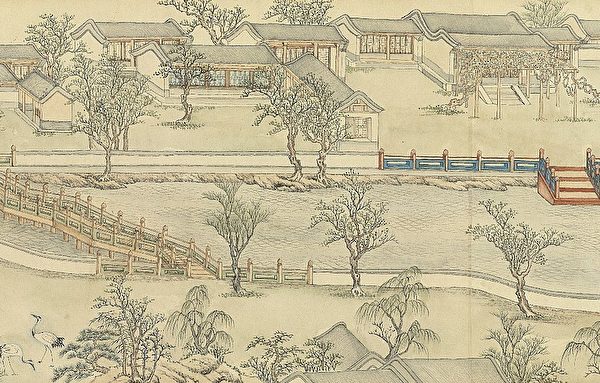 When the two arrived at school, It was arranged for them to live in an old house with no shutters on the windows. Shanbo pushed Zhu Yingtai to the window, laughing that this is how the students would cover the window to keep out the wind and rain for everyone.

In school, Yingtai was outstanding, but physically weak. Shanbo treated Yingtai like a younger brother. He cared very much about her. When other students in the school challenged Yingtai or gave her heavy work, Shanbo came forward to help out by assisting with the heavy work. He was a powerful support for her.

During the day, they went to the lecture hall to attend classes. In the evening, they went back to the dormitory to read poetry. When they had some time off, they went out for a walk and enjoyed the scenery. They also went to the Confucius Temple and study in Soochow. The two of them had become best friends and were inseparable.

Through spring flowers and autumn moons, three years passed and the two were completely comfortable with each other, providing mutual care and mutual support. During the three years that they lived together, Yingtai gradually fell in love with Shanbo, but she could not tell him. She decided that she would not marry anyone but Liang Shanbo. She could only pray in silence. Living under the same roof as brothers, they treated each other like real brothers — respecting each other and protecting each other.

Zhu Yingtai kept her feelings to herself and dressed properly, in winter or summer. In the summer when the boys put on light tunics, she wore women’s undergarments with a man’s shirt on the outside. When she needed to change her clothes or take a bath, she would take her housemaid with her and leave the school. Although Shanbo sometimes had his doubts, he believed Yintai’s excuses. Shanbo was a straightforward and well-behaved young man, so even at the completion of his studies, he was unaware that Yingtai was a woman.

One day, Yingtai received a letter from her father saying that she had reached the marrying age and asked her to return home.

On the day of departure, Shanbo accompanied her for 18 miles and walked along many roads and over many bridges. Along the way, Yingtai tried to express her feelings to Shanbo several times, but stopped short. It was an era in which only arranged marriages were allowed. In the end, Yingtai had no choice but to pretend that she had a little sister who wanted to play the role of matchmaker for Shanbo and her. Shanbo agreed with pleasure. The two agreed that Shanbo would come to the Zhu family for a visit. They made a date on July 7.

The ending of the legend of Liang and Zhu

In the Jin Dynasty, marriages were made with families of equal status. Liang Shanbo recognized he was from a lower class and dragged his feet. He did not visit the Zhu family on the promised date even though it was after he passed the exam and was appointed as a county magistrate. So due to the delay, the parents of Yingtai had arranged for their daughter to marry Ma Wencai, the son of Zhaozhou Prefecture. When Shanbo eventually did go to meet the family, Yingtai dressed like a lady to receive him. At that moment, Shanbo realized that Yingtai was a woman who was in love with him.

When he learned that Yingtai would be forced to marry Ma Wencai, Shanbo repented, and Yingtai was extremely sad. They both knew that the marriage between a man and woman was the result of past karma, so it was their fate. They did not want to go against God’s will, and they did not want to hurt their parents. They could only choose to give up their personal feelings and had a tearful goodbye. At the same time, the two secretly made a wish to be together in the next life as they were not able to marry in this life.

After Shanbo’s departure, he worked as a county magistrate. He was decent, honest, and hard-working. As he always reminisced about the wonderful times reading with Yingtai and their friendship, love, and remorse became intertwined and he was overburdened physically and emotionally, dying not long afterward. Before his death, he requested to be buried at the place where he and Yingtai vowed to be brothers.

On the day of Yingtai’s marriage, she was traveling on the boat to the groom’s home when the original sunny good weather changed into a big storm close to Shanbo’s burial place and the boat could not continue its journey. Yingtai requested to stop to pay respect to Shanbo and cried sadly by his grave. At that moment, the wind blew, sand and rock flew around, and the ground split open. Yingtai fell into the fissure and was buried under the ground.

After the weather calmed down, people saw two beautiful butterflies above the tomb, flying in the rainbow, flying between the heavens and the earth. In the legend, these two butterflies were the souls of Liang Shanbo and Zhu Yingtai. 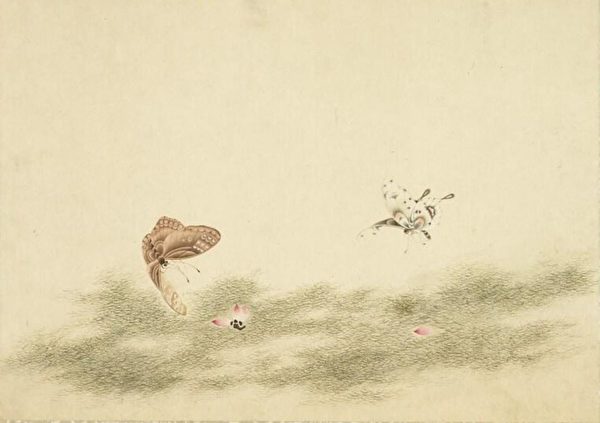 Flower Figure. In the legend, these two butterflies were the souls of Liang Shanbo and Zhu Yingtai. (Image: Public Domain)

How the Aztecs Could Improve Modern Urban Farming