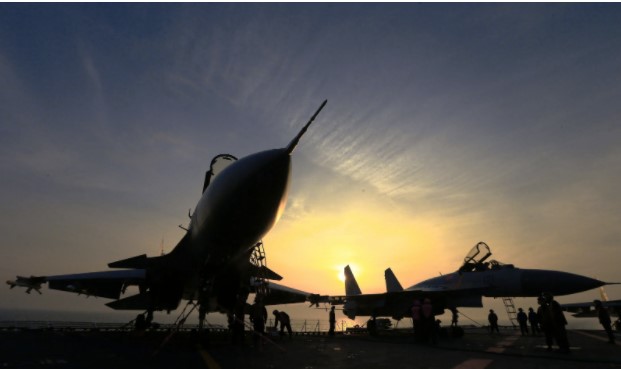 Russia and China are both long-term rivals of the United States, and recent U.S. intelligence indicates that they are prepared to launch “Cybergeddon,” a type of large-scale sabotage of critical U.S. electronic networks and systems by using EMP weapons.

He describes how a nuclear weapon can be detonated at least 30 kilometers in the air, creating an intense high-altitude electromagnetic pulse (HEMP). In contrast to a nuclear weapon exploding near the surface that would result in shock waves, thermal radiation, and soil mixed with fission products gradually falling back to Earth, the effects of a high-altitude explosion are limited to a HEMP.

Pry states that Russia has “Super-EMP” weapons  that were specifically engineered for HEMP attacks, which “potentially generate 100,000 volts/meter or higher, greatly exceeding the U.S. military hardening standard (50,000 volts/meter).” He speculates that the Soviet Union and Russia’s HEMP nuclear tests have likely allowed Russia to outpace the U.S. in terms of knowledge and experience. By employing hypersonic vehicles that fly at an altitude of 50 to 100 kilometers or keeping nuclear-armed satellites in orbit for years in preparation for a surprise attack, Super-EMP warheads could be deployed as a “first-strike weapon” against the U.S.

Russian warheads have now reached the capability of traveling at a speed of Mach 20, 20 times the speed of sound. Also, these warheads can skim the top of the upper atmosphere and are maneuverable, decreasing the ability of U.S. early-warning satellites and radars to detect them. In the words of Dr. Mark Schneider, a former senior Defense Department official: “The main reason for Russian hypersonic missiles is a nuclear surprise attack — and America has no defense against them.”

Given that a vast majority of America’s infrastructure is dependent on electricity, an EMP attack could be disastrous. Transformers used to power electrical grids require long manufacturing and transport times, thus prolonging the recovery of electrical systems in the event of an EMP attack. A HEMP attack could potentially neutralize U.S. ballistic missile submarines, a key objective that the USSR failed to achieve during the Cold War. Furthermore, since HEMP attacks are categorized as Information, Electronic, or Cyber Warfare, the already loose Russian nuclear weapons regulations may not apply.

Pry writes that Russia’s overarching goal is to “win World War III at the speed of light.” Just this past year, in 2020, Russia successfully performed one of the most advanced and dangerous attacks on the U.S. government and private sector in history. Russia bypassed the Cybersecurity and Infrastructure Security Agency (CISA), which is America’s major defense organization against threats to critical infrastructures.

Between March and December 2020, Russian cyber-spies remained undetected. They infiltrated the National Nuclear Security Administration in charge of U.S. nuclear weapons, the Department of Energy, and the Federal Energy Regulatory Commission, which oversees national electric grids, defense contractors that design advanced U.S. weapons, and 18,000 other government and corporate victims.

The extent of the damage is still unknown. It could range from a mere intelligence gathering operation to a full-fledged sabotage mission containing logic-bombs, viruses, and cyber-bugs that could be exploited in the future.

“As soon as its computer networks come under attack and are destroyed, the country will slip into a state of paralysis, and the lives of its people will ground to a halt. Therefore, China should focus on measures to counter computer viruses, nuclear electromagnetic pulse… and quickly achieve breakthroughs in those technologies to equip China without delay with equivalent deterrence that will enable it to stand up to the military powers in the information age and neutralize and check the deterrence of Western powers, including the United States.”

The partnership between Russian and Chinese forces was on full display in Russia’s VOSTOK-18 in September 2018, one of the most extensive military exercises in history. Russia had 297,000 personnel in attendance, while China sent 3,200 personnel, 1,000 military vehicles and equipment, and 30 fixed and rotary-wing aircraft. Clearly, both Russia and China have shown that they have elite cyberwarfare and EMP capabilities.

Experts worry that by revoking President Trump’s order to shield the U.S. power grid, President Biden has left the U.S. even more vulnerable to foreign attacks.