Outbreaks of the novel coronavirus are resurfacing in parts of northern China, as communist authorities continue to suppress information about the epidemic from the public.

Leaked government documents from various cities across the region show that the real figures of those newly infected with the disease are rising fast. Meanwhile, authorities are taking steps to brace for the worsening situation, such as increasing hospital capacity.

The outbreaks are particularly severe in the northeastern Chinese city of Harbin, where the local government has implemented new lockdowns restricting travel, and partially shut down public activity throughout the city. Video taken by Harbin residents shows long lines outside the city’s hospitals.

A document from one of the city’s built-up districts leaked to The Epoch Times shows that 34 people were confirmed infected on April 19 alone — raising the possibility that the real number of recent cases surpasses the official figures by more than 200 times.

The CCP virus, which causes the respiratory disease COVID-19, first broke out in Wuhan, the capital of Hubei Province in central China, last December. Due to the Chinese Communist Party’s initial cover-ups and underreporting of the epidemic, the virus quickly spread to the rest of the country and abroad.

Apart from Harbin and other cities in Heilongjiang, authorities in China’s Inner Mongolia region and Liaoning Province have officially reported new cases of the virus, while the district of Chaoyang in Beijing was declared a “high-risk region” on April 19 — the first area in China designated as such outside of Hubei.

Weeks into the Wuhan outbreak, the CCP implemented draconian lockdowns, and weeks later claimed that the epidemic was under control.

Harbin is the capital of Heilongjiang Province, which borders Russia. The province did not report any new cases or deaths between Feb. 23 and April 9 — roughly mirroring the controversial statistics produced by authorities across the rest of China. 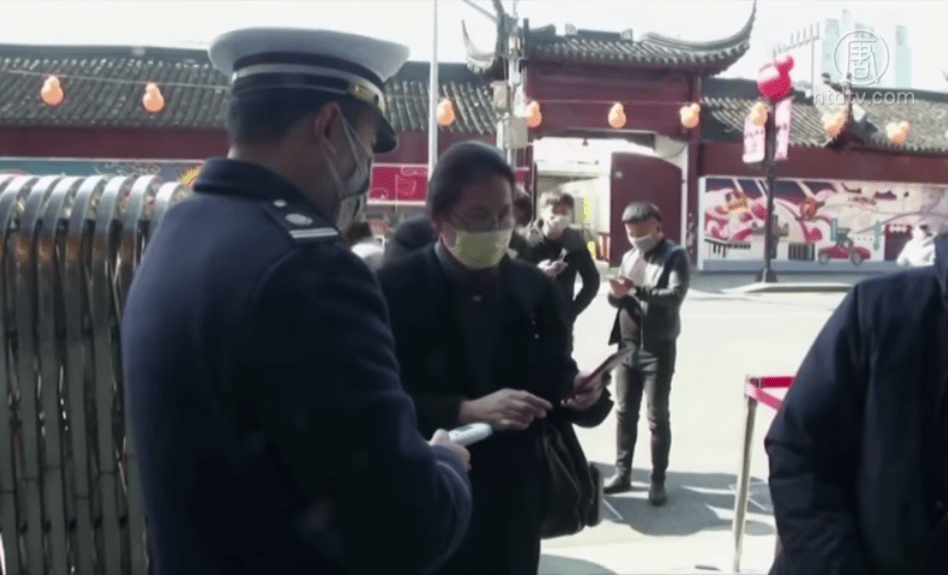 A police officer at a checkpoint in Harbin, northeastern China. (Image: YouTube/Screenshot)

But on April 15, the Harbin municipal government announced the removal of the city’s local health commission director and gave no reason for the decision.

Two days earlier, a video shot by a Harbin resident and shared online showed what appeared to be thousands of people waiting in line outside the Harbin Medical University’s (HMU) First Affiliated Hospital. Another video from April 15 showed workers constructing a temporary wall to block off a residential community.

On April 14, a man in a car was stopped by police on the highway while trying to enter Harbin. In footage taken by the man, an officer tells him: “Harbin is under quarantine now. All cars should turn back to where they came from. No vehicles are allowed to enter Harbin.”

The first recent case reported by the city was that of a man surnamed Guo, who was confirmed to have contracted the disease on April 9. On April 12, the Harbin health commission said that Guo had transmitted COVID-19 to at least nine others. The municipal government reported at least 58 new cases between April 9 and April 19.

In Inner Mongolia, dozens of new cases have been officially registered, though government documents leaked to The Epoch Times say the actual numbers are higher. In addition, authorities throughout the region have discovered the re-emergence of plague among rodent populations in some cities, such as Baotou, which has more than 1 million people.

On April 17, Heilongjiang CCP authorities announced that 18 officials in Harbin would be punished for their incompetence in handling the epidemic.

But the province’s outbreak isn’t limited to Harbin. From March 27 to April 9, Suifenhe City, near the Russian border, reported more than 100 cases and 148 asymptomatic patients — people infected with COVID-19 without showing symptoms.

Suifenhe began construction of a 600-bed makeshift hospital for asymptomatic patients, and all the city’s residents are under lockdown.

On April 22, state-run newspaper Yangtze Daily quoted the Heilongjiang provincial health commission as stating that two doctors and six nurses were diagnosed with the virus at Harbin No. 2 Hospital. They were being treated at designated hospitals. Hundreds of medical staff from the hospital were being observed at quarantine centers.

China’s official statistics regarding CCP virus statistics do not match up with some of the CCP regime’s other claims, and are directly contradicted by internal documents obtained by The Epoch Times.

Despite the authorities designating it a “high-risk region,” Beijing’s Chaoyang District announced just three recent infections on April 16. Furthermore, people leaving the district were required to undergo 14 days of quarantine.

According to Pang Xinghuo, deputy director of Beijing’s municipal health commission, a “high-risk region” is defined as an area with more than 50 infections and a cluster outbreak within 14 days.

However, Harbin, the capital of Heilongjiang Province, did not get this designation — despite authorities having announced at least 58 domestic diagnosed patients between April 9 to April 19, and several cluster outbreaks occurring at Harbin Medical University (HMU) First Affiliated Hospital, Harbin No. 2 Hospital, as well as in residential compounds. 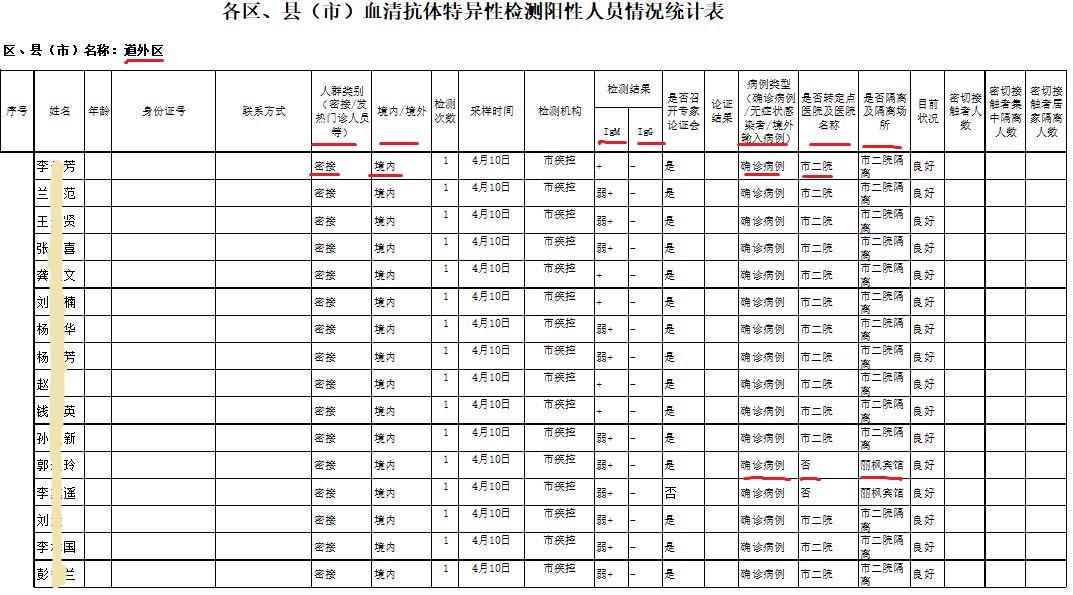 The Epoch Times notes that “the majority of the city is set as ‘low risk’ areas. Only Daowai and Nangang districts were classified as ‘medium risk regions.’”

On April 13, a “Warning Notice” produced by the Harbin anti-epidemic task force analyzed the city’s recent outbreak, admonishing Harbin officials for being lax in controlling the virus. In addition, it listed 39 infections not included in the publically available tally of cases.

“The city government didn’t track down the patients’ recent activities and where they were infected. It didn’t even strengthen control measures,” the document stated.

In a statistical data sheet from the China CDC in Daowai District dated April 10 contained the personal and medical information of 34 COVID-19 patients, of whom at least 30 were recently infected.

However, the municipal health commission made public just one new case for the whole of Harbin that day, bringing total recent cases in the city — excluding those originating from abroad, or asymptomatic cases — to two.

Daowai is one of 18 districts in Harbin, raising the possibility that more cases throughout the city are being kept out of public view.

Around 800,000 people live in Daowai, while Harbin has a population of more than 10 million people, including 5 million in its built-up areas. Extrapolating the number of cases confirmed in Daowai on April 10 to the rest of Harbin gives an estimated 476 recent cases — meaning that the Harbin health commission may have underreported recent cases by up to 233 times.

A notice from Heilongjiang’s health commission dated April 8 said that the provincial leadership was planning to make nearly 4,000 hospital beds available, and set up a medical support team consisting of 1,100 staff. 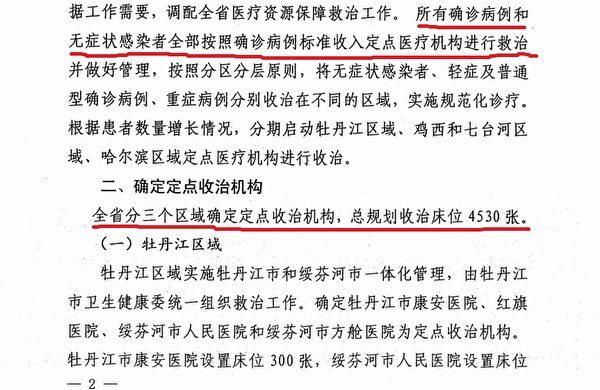 A screenshot of the April 8 document from the Heilongjiang provincial health commission. (Image: The Epoch Times)

On April 11, state-run media reported that the Harbin government postponed the opening date for middle schools, while students from other schools would be mostly required to attend classes remotely.

Harbin residents told The Epoch Times that they were very nervous about the virus’s spread.

Since mid-March, the Communist Party has been encouraging local authorities to both control the epidemic and resume normal economic activity.

The lockdown of Wuhan, which began on Jan. 23, was lifted 76 days later on April 8 amid concerns about the continued epidemic risk. A Chinese health expert warned that there could be tens of thousands of asymptomatic cases in Wuhan, but his posts were quickly deleted by regime censors.

In the last few weeks, People’s Republic of China (PRC) authorities have sounded the alarm about COVID-19 cases imported from abroad and closed off China’s borders. But many suspect that Beijing is using foreign arrivals — most of them Chinese nationals — as scapegoats, pinning blame for all new cases on them.

The authorities in Heilongjiang and Inner Mongolia have been reporting most of their cases as being Chinese who returned from foreign countries, particularly Russia. In addition, some flights from abroad bound for Beijing have been re-routed to Hohhot, capital of Inner Mongolia, where passengers were tested for the virus.

On April 8, the Sino-Russian land port in the Inner Mongolia city of Manzhouli was closed, with authorities citing large numbers of infected Chinese trying to cross the border as the reason for the closure. As of April 11, no more points of entry along the China-Russia border remained open.

Of the more than 100 cases recently reported in Suifenhe, the border city in Heilongjiang, just three cases were domestic in origin, as reported by The Epoch Times.

“Residents in Heilongjiang, however, have expressed doubt about the official figures, saying authorities were likely aiming to downplay the severity of the new wave of infections by focusing on imported cases,” the report said.

A Harbin man surnamed Yu who spoke with The Epoch Times questioned the official narrative that most cases were from abroad.

“If they acknowledged local cases, it would mean that the outbreak is not under control, and ‘imported cases’ would be a convenient excuse,” he said. “Local officials have been covering it up; they don’t report the true [numbers].”