China successfully launched its largest space rocket yet, in what is a major step in its plans to further explore the Moon and eventually conduct Mars missions.

The Long March 5 lifted off from the Wenchang Satellite Launch Center on Dec. 27 and entered orbit a quarter-hour later. It deployed the communications satellite Shijian 20, according to Chinese state broadcaster CCTV.

Measuring 5 meters (16 ft) in diameter and 57 meters (187 ft) in height, the Long March 5 can carry a roughly 27-ton payload to low earth orbit (LEO). It is about a third of the weight of the 363-foot-long Saturn V rockets that took American astronauts to the moon.

The latest launch is the third for the Long March 5, and the first considered a “complete success,” according to the China National Space Administration (CNSA).

The first launch took place in November 2016, but it suffered from various malfunctions that interrupted the final countdown multiple times. The second launch, on July 2, 2017, suffered engine failure 45 minutes into the flight and the mission was written off.

This experience pushed back CNSA’s schedule for conducting a Mars mission in 2019, as the YF-77 engine had to be redesigned. The plan is now to make a flight to the red planet in mid-2020.

China has been making steady progress in its space ambitions, including the lunar exploration program named Chang’e after the moon goddess of ancient Chinese myth. The last mission, Chang’e 5, launched at the end of 2018 and delivered a rover to the far side of the Moon on Jan. 3, 2019, the first such landing in the history of spaceflight. The Long March 3B rocket involved in the mission also deployed the Queqiao, a lunar satellite to relay information between the rover, called the Yutu 2, and Earth. Because the far side of the Moon always faces away from Earth, no direct signals are possible. 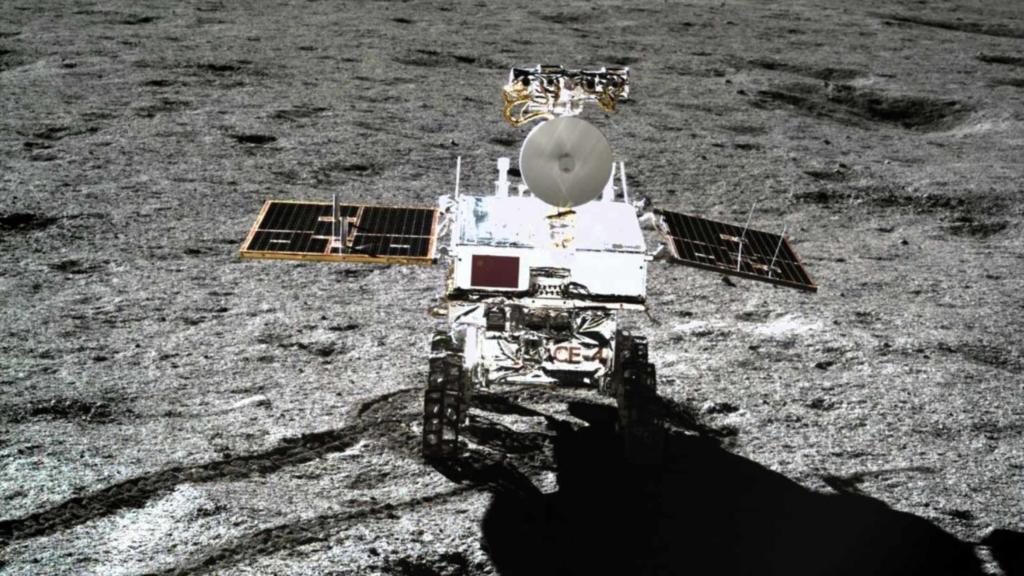 The Yutu 2 rover on the far side of the Moon. (Image: Chinese Lunar Exploration Program)

CNSA’s plans to launch Chang’e 5 were also delayed by the failure of the second Long March 5 test launch. The objective of Chang’e 5 is to bring back samples from the lunar surface.

The Long March 5 rocket is expected to be able to carry 8 metric tons (tonnes) to the Moon, or 5 tonnes to Mars.

The People’s Republic of China has ambitious long-term aims for exploring and utilizing outer space. Much like the space program of the former Soviet Union, CNSA’s efforts dovetail with those of the country’s military.

While China became the third country after the United States and the Soviet Union to send a man to space, its space program has thus far focused on unmanned missions, as well as projects with a mind to practical applications. China carried out the most orbital launches in 2018 and 2019, surpassing Russia.

Part of the PRC’s aim in conducting lunar operations, for instance, is to gain a foothold on the bountiful helium-3 deposits present there. Helium-3 is an important fuel in fusion power.

Beijing has also been expanding its military capabilities in space, testing its first anti-satellite missile in 2007 and deploying space-based “assassin’s mace” weapons that could threaten enemy GPS navigation systems in the years following.

In 2019, the United States created a new military branch, the Space Force, aimed at countering the PRC’s growing power in space, as well as that of the Russian Federation.

Why Xi May Not Get Everything He’s Looking For at the 20th Party Congress
Uyghurs Killed by Mass Disinfectant Spraying During ‘Zero-COVID’ Sweeps
Citing ‘Low Usage’, Google Shuts Down Translate Services in Mainland China
Students in China’s Zhengzhou Protest ‘Zero-COVID’ Policy: ‘End the Lockdowns’