The Last Emperor was, for most moviegoers, an unforgettable cinematic experience. It encompasses Puyi’s noble birth and brief reign. Born in Beijing on February 7, 1903, Puyi was declared the 12th Emperor of China at the age of three by Empress Dowager Cixi. Puyi lived a secluded life in total splendor within the Forbidden City. Millions of people adored him, but there was nothing that could prepare him for the changes that lay ahead.

In 1912, the invading Japanese forced Puyi to renounce the throne. Thus ended the 267-year Qing dynastic rule of China. Puyi was captured by the Red Army and spent almost a decade in a prison cell in the city of Fushun. He obtained a pardon in 1959. The last emperor spent his remaining years living obscurely in the “People’s Republic.”

Puyi passed away in 1967. The Palace Museum in Beijing has preserved priceless possessions from Puyi’s whimsical childhood through to adulthood. Included among these are his iconic oval gold-rimmed glasses.

A charming birdcage, complete with a mechanical bird, is reminiscent of the folk tale The Emperor and the Nightingale by Hans Christian Anderson. During the Qing Dynasty, taking a walk with a bird was a popular pastime. Standing at 19 inches with a width of 11.5 inches, the cage is of the same size as a real birdcage. By turning a mechanical winder, the artificial bird inside sings and rotates.

When Puyi was expelled from the Forbidden City in 1924, he fled to Tianjin. Facing financial difficulties, he loaned this gold-engraved tableware to the Yien Yieh Commercial Bank in Tientsin.

The poker cards were made by WD HO Wills, a British cigarette manufacturer. Drawings on the cards reveal fashions of the English women of the time. Puyi spent many years with his English teacher, Johnston, who shared English culture and traditions with him. Apparently, according to the Palace Museum, Puyi and Empress Wanrong used to play poker for hours together. 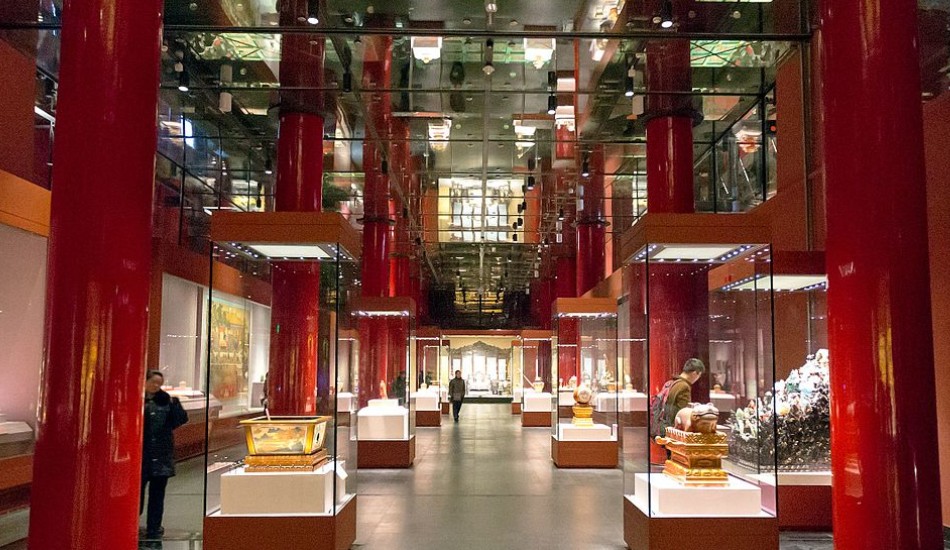 The Palace Museum in Beijing has preserved priceless possessions from Puyi’s whimsical childhood through to adulthood. (Image: Morio via wikimedia CC BY-SA 4.0)

Puyi’s spectacles were collected by the Palace Museum. They are oval-shaped with a 14ct gold metal frame. An optical company named Jing Yi designed them. The arms are made to be flexible and could be tweaked to fit the head comfortably.

Puyi loved music and he imported a gramophone in the early 20th century. He used to play vinyl records featuring Peking opera music and songs from overseas to the delight of the imperial household.

A gift from a Japanese official

The watch, in a gold case, was kept in a black sharkskin box. There is a docket with a signature. The Swiss-made watch was a gift for Puyi from a Japanese official.

A child’s manual fan; it’s decorated with pretty golden patterns. It was a toy of Puyi’s when he was a tot. To start the fan, the button on the left is pushed which causes the fan to spin. 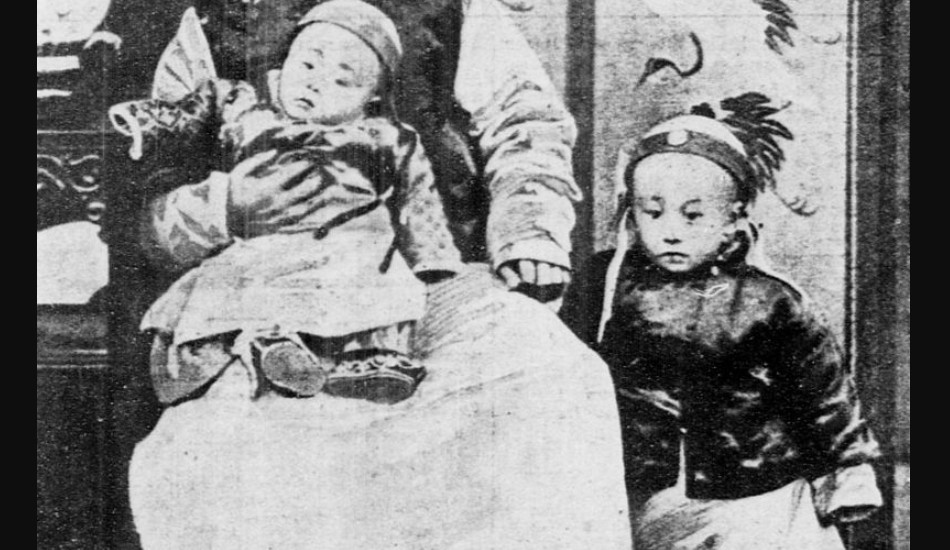 The three seals were carved from a single piece of rock in Tianhuang. The rock was regarded as one of the most costly gemstones found in China. After the sixth Emperor Qianlong’s death, the seals were passed to his descendants. As the last monarch, Puyi carried them with him after he was expelled from the Forbidden City in 1924. In 1950, when Puyi went back to China as a war criminal, the chained seals were returned to the CCP regime.