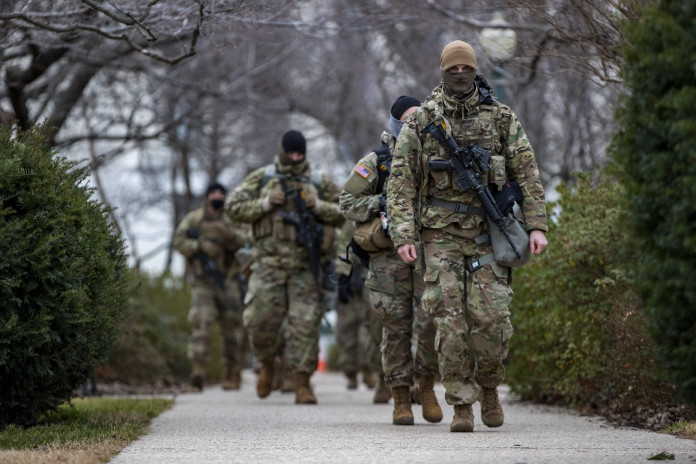 As a safety measure, nearly 26,000 National Guards were stationed in Washington D.C. during Biden’s inauguration. After a full week, approximately 13,700 guards still remain in the city. According to the military chief of the National Guard, the troops are in place due to a request for assistance from the Capitol Police.

Some of these guards will apparently remain there until March. Retired Lt. Steven Rogers, a former FBI Joint Terrorism Task Force member, believes that the continued presence of guards at the capital is a cause for concern.

“The purpose of the National Guard is to supplement law enforcement agencies, to help them with crowd control, to help them with enforcing laws, just to supplement their manpower. That job was done… And unfortunately, what the message the American people are receiving is that this is slowly becoming an occupation force that is absolutely unnecessary,” Rogers said in an interview with NTD.

According to Acting Army Secretary John Whitley, the National Guard has been stationed in Washington due to FBI threats about possible unrest in the next few weeks. However, Rogers dismisses such concerns and states that guards are being used for a political move. He notes that the National Guards were not deployed in recent riots unleashed by the extreme-left Antifa groups.

Rogers hopes that the troops are sent back so that they can be combat-ready to deal with conflicts whenever they arise.

Republican Michael Waltz criticized the continued deployment of National Guards in D.C. and feels that they are being used as “Nancy Pelosi’s private police force,” which is not an appropriate task for those in uniform. He wants to see the threat reporting and mission analysis that demanded the presence of thousands of National Guards.

Waltz stressed that the guards should only be used as an “absolute last resort” since they are people with their own personal lives. Many of them are single parents who had to make immediate arrangements for their kids before donning uniforms and reporting for duty.

Republican Congressman Madison Cawthorn is convinced that the National Guards are being toyed with by the Democrats. “It’s obvious that the Democrats are just trying to play political theatre with our nation’s soldiers… They’re trying to have the optic that our nation is in turmoil and in a very difficult place… These liberal lawmakers came down, took selfies with these troops, acted like they loved them. But, as soon as all the cameras went away, ‘cause it was just the Democrats in Washington, they very quickly cast them to the side. They were upset that many of them weren’t wearing masks,” he said to Breitbart.

Last week, a controversy erupted after National Guard members were sent to rest in the parking garage rather than providing them with decent amenities. President Biden had to issue a public apology to salvage the situation. First Lady Jill Biden delivered a batch of cookies to the guards to show her appreciation for “keeping me and my family safe.”