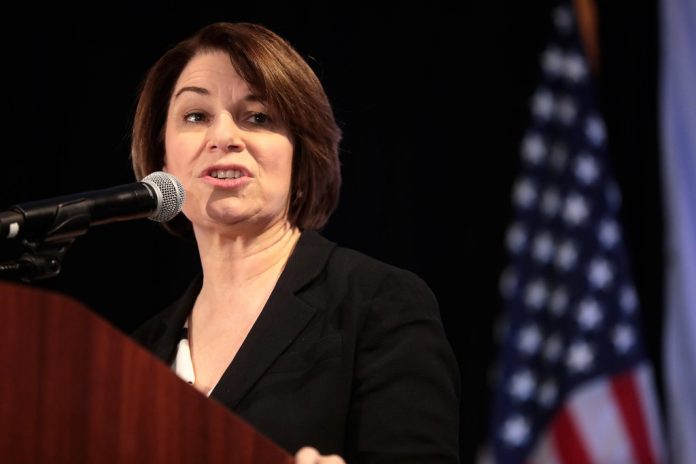 If passed by the new Democratic-led Congress, the legislation would prohibit dominant companies from making acquisitions unless they could prove that their deals would not “create an appreciable risk of materially lessening competition.” According to the bill, judges should presume anticompetitive behavior unless the dominant company can offer evidence to the contrary. Claimants will not have to define the market in which the anticompetitive conduct occurred explicitly. The Justice Department and FTC would be able to seek fines for first-time civil antitrust violations. Additionally, the legislation would boost the annual budget of the Justice Department’s antitrust division to $484.5 million and the FTC’s account to $651 million, which are roughly $300 million more than their current budgets.

On CNN Newsroom, Klobuchar elaborated on how her antitrust bill is all about creating checks and balances:

“You have a situation where, throughout history, new companies, small start-ups have changed the country, have made our country so strong, and right now… you have companies like Google that have 90% control over search engines. What I’m proposing is make sure these agencies are able to take on trillion-dollar companies like Facebook and Google. They can’t do it with band-aids and duct tape… we must have laws that are as sophisticated as the companies we’re dealing with.”

When asked if it would be possible to break up merged companies under the bill, she replied: “I’m in favor of actually having WhatsApp and Instagram be separate companies. But that being said, how are you going to get more privacy controls in place and stop the misinformation? One, we should put regulations in place. Secondly… if you unleash the power of private enterprise in our country, that’s what the antitrust laws are about, then you can develop companies that will be able to take them on with things that people need, and right now people need platforms that aren’t throwing out a bunch of misinformation and are better for privacy.”

In a tweet on February 4, Klobuchar reinforced her position by stating that there is a monopoly problem and that it should be tackled with stricter regulations and increased enforcement resources.

Opposition to the legislation is likely to be significant, especially with historically high federal lobbying expenditures by big technology companies such as Facebook and Amazon. Facebook CEO Mark Zuckerberg spent nearly $20 million on federal lobbying in 2020, increasing almost 18% from 2019. Multiple federal and state antitrust lawsuits have been filed against Facebook, and Zuckerberg has attended a series of hearings summonings in Washington.

Amazon CEO Jeff Bezos spent about $18 million last year on federal lobbying, up almost 11% from the previous year. Bezos testified before Congress for the first time in August 2020, where he defended Amazon’s business practices and emphasized his “obsessive customer focus.” However, the United Food and Commercial Workers International Union (UFCW), the largest food and retail union in America comprised of 1.3 million workers, filed an anti-competition complaint with the Federal Trade Commission in July 2020 criticizing Amazon’s “blatant efforts to stop employees from exercising their right to join a union and endangering both workers and consumers by failing to disclose internal numbers on how many Amazon employees have been infected by COVID-19.”

Furthermore, the UFCW stated: “Amazon has moved aggressively to scoop up start-ups and established companies weakened by the pandemic.” A coalition of groups that joined UFCW in the complaint included the International Brotherhood of Teamsters, the Communications Workers of America, and Change to Win.

Additionally, the chair of the United States House Judiciary Subcommittee on Antitrust, Commercial and Administrative Law, David N. Cicilline (R-RI), released a statement after retaining his chairmanship on Wednesday: “Last year, the Antitrust Subcommittee conducted the most sweeping congressional antitrust investigation of its kind in a half-century. I am delighted that I will have the opportunity to continue this work along with my outstanding colleagues on the subcommittee.” His subcommittee’s jurisdiction includes bankruptcy and commercial law, bankruptcy judgeships, administrative law, independent counsel, state taxation affecting interstate commerce, interstate compacts, antitrust matters, and other relevant matters.

Similar to Klobuchar’s legislation in the Senate, Cicilline is drafting his own legislation in the House. While he has yet to release the content of his proposals, he is considering restricting big tech companies from operating large online platforms to sell their products in competition with other sellers. He argues that “a lucky few sit secure atop our economy, it’s getting harder and harder for everyone else just to compete… The time has come for real reform that takes on monopoly power, restores competitive marketplaces, and puts the interests of consumers and working people first.”