Home US Bloomberg Predicts 7 Years to Reach Projected Vaccination Goal and Return...
US 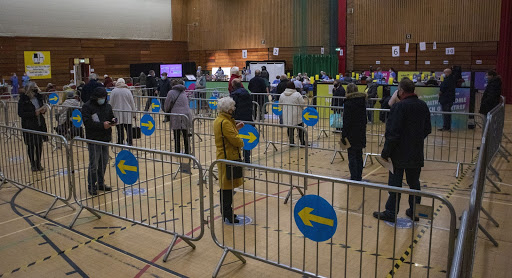 As people globally are looking to vaccines as a relief from the pandemic, Bloomberg is currently producing the largest database of COVID-19 vaccinations. President Joe Biden’s Chief Medical Advisor Anthony Fauci says that there needs to be a 70-85 percent vaccination rate for things to return to normal.

Based on Bloomberg’s estimations, it will take almost seven years to get 75 percent of the global population vaccinated and achieve a rate of immunity that may return things to normal. “Globally, the latest vaccination rate is 4,686,070 doses per day, on average. At this rate, it will take an estimated 6.7 years to cover 75% of the population with a two-dose vaccine,” Bloomberg reported.

There have been 42 million doses administered in the U.S. at an average of 1.46 million per day. And 32.1 million have received their first dose, with 9.43 million completing both doses of the vaccine.

China and Russia started administering their vaccines earlier, in July and August. They have now administered millions of doses of vaccines that were even less thoroughly tested than those used in the U.S. and have provided Bloomberg less frequent progress updates than other countries.

Israel’s progress with vaccinations is the fastest

Among the countries that are progressing with vaccinations, Israel is the leader, with a projected coverage of 75 percent within the next two months. “With the start of the global vaccination campaign, countries have experienced unequal access to vaccines and varying degrees of efficiency in getting shots into people’s arms. Israel’s rate of inoculations dwarfs the efforts of other nations, with 61.3 doses administered for every 100 people. Most countries haven’t yet given their first shots,” Bloomberg reported.

According to the Financial Post, after having met with some delays in shipments of vaccines, Canada’s vaccination rate has dropped in half in recent weeks. It would take more than 10 years to reach the 75 percent target at Canada’s current pace. However, Canada has contracts to buy more vaccine doses, and vaccination rates are supposed to climb if those contracts are fulfilled and get the desired supply of vaccines.

President of the Philippines Rodrigo Duterte warned communist rebels and his government’s own customs agents not to delay transport and delivery of COVID-19 vaccines to isolated areas of his country. “Your job, Customs, is to look. You have no business opening things up. You are not allowed to do that. I am not allowing anybody in the airport to open things up,” Duterte stated. “Allow the vaccines to be transported freely and safely. I am asking you now to observe that rule because that is for the Filipino people,” Duterte added, saying the Philippines should follow the “rules of humanity.”

“The country will get some 10 million doses of COVID-19 vaccines under the global alliance COVAX Facility in the first quarter, including 117,000 doses of Pfizer vaccine expected to arrive by the third week of February,” government official Carlito Galvez Jr. said to Philippine news outlet ABS-CBN News.

“When will life return to normal? It’s a complicated question and the subject of debate among epidemiologists. While the best vaccines are thought to be about 95% effective, it may still be possible to spread the disease after getting inoculated,” Bloomberg claims. Although nations around the world have been contributing maximal time and effort into vaccine development and production, “none of these shots, on its own, is enough to inoculate a global population of some 7.8 billion people. But together, they represent humanity’s best chance of ending a scourge that has claimed more than 2.2 million lives and triggered global economic calamity.”

Fauci, who was very critical of former President Donald Trump’s approach to the pandemic, is delighted with the hard scientific approach President Joe Biden is taking, including his stance on racial justice. “We have a disparity here that is striking and needs to be addressed — that if you look at the incidence of infection and the incidence of serious disease, including hospitalization and deaths, brown and Black people suffer disproportionately more than whites,” Fauci claimed in a recent interview with NPR. “We live in a global community, and unless we get the rest of the world adequately vaccinated and unless we don’t have the opportunity of this virus to mutate in a place that doesn’t have access to vaccines, we will always be threatened.”