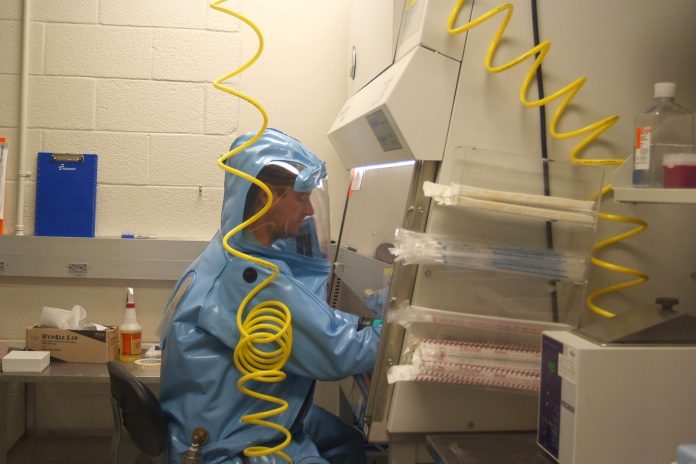 Health experts and government officials in Canada and the U.S. have expressed concerns about viruses sent to China and gain-of-function virology research.

On May 24, 2019, Manitoba RCMP was referred by PHAC to investigate a policy breach and “administrative manner” at the NML. At the time, Robert Cyrenne, an RCMP spokesperson, remarked that “there is no threat to public safety” and that “in order to maintain the integrity of the investigative process, we have no further comment at this time.”

CBC sources reported that despite being escorted out of the lab on July 5, 2019, and having security privileges revoked, the couple remained in Winnipeg with pay while not working. The University of Manitoba ended Their appointments, and Dr. Qiu’s graduate students were reassigned.

An email to CBC News on Feb. 5 from Eric Morrissette, chief of media relations for Health Canada and PHAC, stated, “The two scientists are no longer employed by the Public Health Agency of Canada as of Jan. 20, 2021. We cannot disclose additional information, nor comment further, for reasons of confidentiality.”

Indeed, confidentiality and security are of utmost importance at the National Microbiology Lab, the only Level 4 virology facility in Canada. Researchers study lethal and severe human and animal diseases such as Ebola, which require the highest level of containment.

In 1996, Qiu was a medical doctor from Tianjin, China, who moved to Canada to pursue a graduate degree. Over the years, she recruited and mentored several students from China.

Qiu was well-respected as an adjunct professor in the Department of Medical Microbiology at the University of Manitoba. She headed the Vaccine Development and Antiviral Therapies section in the Special Pathogens Program at the lab, with a primary focus on vaccine development, post-exposure therapeutics, and rapid diagnostics of viruses.

In 2018, Drs. Qiu and Gary Kobinger were awarded the Governor General’s Innovation Award.

In June 2020, access-to-information documents obtained by the CBC revealed that Qiu facilitated the shipment of Ebola and Nipah viruses to the Wuhan Institute of Virology in 2019. Law professor and epidemiologist at the University of Ottawa, Amir Attaran, stated, “It is suspicious. It is alarming. It is potentially life-threatening.” It is unknown whether shipments of viruses or other items occurred between 2006 and 2018 when Qiu researched powerful viruses.

Attaran went on to say, “We have a researcher who was removed by the RCMP from the highest security laboratory that Canada has for reasons that the government is unwilling to disclose. But what we know is that before she was removed, she sent one of the deadliest viruses on Earth. Multiple varieties of it to maximize the genetic diversity and maximize what experimenters in China could do with it, to a laboratory in China that does the dangerous gain of function experiments. And that has links to the Chinese military.”

An Ebola study published in Dec. 2018, three months after Qiu had begun sending viruses to China, includes authors from NML and the University of Manitoba. The first author, Hualei Wang, works with the Academy of Military Medical Sciences in Beijing. Between 2017 and 2018, Qiu traveled to China at least five times, including a trip to train Chinese scientists and technicians at a newly certified Level 4 lab.

Attaran points out that the Wuhan lab conducts gain-of-function experiments, which are particularly dangerous because the lab scientists can create novel deadly or infectious pathogens. Supplying these labs with the Ebola and Nipah viruses was likely an “unwise decision.” Moreover, since only the Nipah virus is found in China or neighboring countries, China’s interest in Ebola, Nipah, Marburg, and Rift Valley fever may not strictly be for scientific or medical reasons.

Secretary-general of NATO, Jens Stoltenberg, brought up the possibility of espionage: “What I can say in general is that we have seen increased efforts by the nations to spy on NATO allies in different ways.” PHAC spokesperson Morrissette described these rumors of espionage as “misinformation” that lacked a “factual basis.” The PHAC denied connections between the shipments to China and Qiu’s eviction from NML.

Canada is not the only country that has concerns about China’s biological research. In June 2020, the U.S. Department of State published a document titled, “Adherence to and Compliance with Arms Control, Nonproliferation, and Disarmament Agreements and Commitments.” Part V of the document covers the Biological Weapons Convention (BWC), an international community’s effort to ban the development, production, and stockpiling of bacteriological (biological) and toxin weapons. The BWC opened for signatures in 1972 and entered into force in 1975.

The 2020 report, which details activities mainly between Jan. 1 and Dec. 31, 2019, states that China “engaged in biological activities with potential dual-use applications, some of which raise concerns regarding its compliance with Article I of the BWC.

In addition, the United States does not have sufficient information to determine whether China eliminated its assessed biological warfare (BW) program, as required under Article II of the Convention.”

Chinese officials have publicly stated that biotechnology will become a cornerstone of national defense. China was noted to have an offensive BW program before it acceded to the BWC in 1984, and noncompliance concerns were raised in 1993 and 2005, U.S. Department of State reports.

Safety concerns also stem from previous small-scale outbreaks and escape of pathogens in multiple countries, including China. After the 2003 SARS epidemic, an outbreak occurred in Anhui Province in 2004 linked to biosafety management issues in a SARS virus research lab.

An accident at the Lanzhou Veterinary Research Institute in Dec. 2019 resulted in 65 lab workers infected with brucellosis. Given the unavoidable threats that accompany deadly virology research, Canada, the U.S., and the rest of the international community must be vigilant about safeguarding viral samples and enforcing the articles of the BWC.

Communist Propaganda in Churches Ahead of CCP Centenary Celebration

Communist Propaganda in Churches Ahead of CCP Centenary Celebration