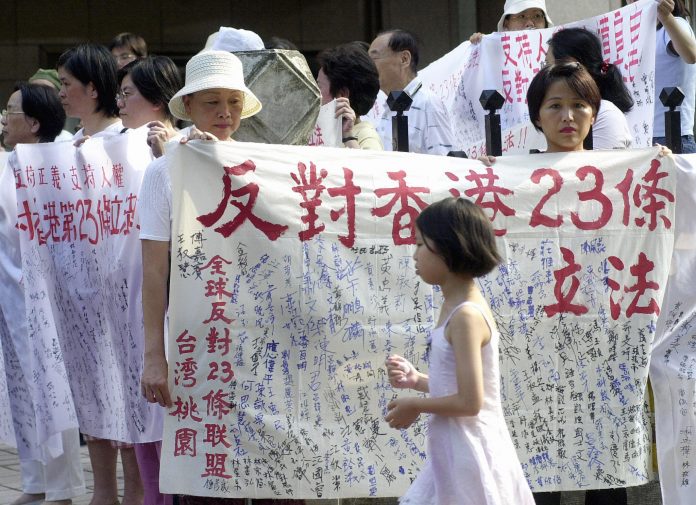 The Director of Hong Kong and Macau Affairs, Xia Baolong, announced in a speech on February 22 that “Patriots should govern Hong Kong. Patriots governing Hong Kong” is the fundamental principle that must be followed to fully and faithfully implement “one country, two systems.” His announcement was echoed by other pro-establishment officials like Erick Tsang, Hong Kong’s secretary for constitutional and mainland affairs, who said, “You cannot say, ‘I’m patriotic, but I don’t respect the fact that it is the Chinese Communist Party which leads the country.’” The pro-establishment camp views of “one country, two systems” have appeared to evolve into loyalty to mainland China. It means ruling Hong Kong rather than Hong Kong being an autonomous region existing under its Basic Laws as an independent country under China.

A call for universal suffrage

The call for universal suffrage in Hong Kong was a push for government seats, including the Chief Executive, to be fully democratically elected by the Hong Kong people.

Currently, the Chief Executive is elected through an election committee that is pro-establishment with ultimate leadership approval by the central government in Beijing.

China’s parliament, the National People’s Congress (NPC), agreed to a full universal suffrage timeline that was pushed forward from 2012 to 2017. The idea of an election committee approving nominees is a point of contention and not what many pro-democracy Hong Kong residents view as universal suffrage.

The culmination of frustration over universal suffrage led to the umbrella movement protests in 2014. The “Patriots Governing Hong Kong” plan is another step towards solidifying Beijing’s dominance in the region and its governance overruling its Basic Law mini-constitution.

After Xia Baolong’s announcement that Hong Kong candidates are to be patriotic towards the mainland, an oath-taking bill was introduced that is required of district councilors. The oath-taking bill has a list of positive and negative attributes that would deem a councilor loyal or unpatriotic.

Unpatriotic behaviors include supporting Hong Kong’s independence and not recognizing mainland China’s sovereignty over the region. Opposing government bills without discrimination and calling for a chief executive to step down are also behaviors deemed unpatriotic. The bill could be applied to district councilors retroactively. Of the current group of 18 district councilors elected in 2019, all but one is pro-democracy.

Erosion of democracy in Hong Kong

When the national security law (NSL) was proposed in 2019, massive protests rocked Hong Kong. Up to 2 million residents took to the streets to partake in the demonstrations. The uprising was reminiscent of the umbrella movement in 2014.

The protests were over the law, which deems “foreign interference,” “secession,” “terrorism,” and “subversion of state power” as crimes that can try an alleged criminal, without a jury, in a court in mainland China.

The NSL was passed in Hong Kong in June 2020 amid the pandemic in which protestors could not take to the streets en masse. The NSL is widely viewed as an erosion of democracy within Hong Kong and contradicts the region’s Basic Law in some regards.

The NSL classifies certain groups of people above the law and gives local police the power to question individuals on their political affiliation with a penalty for those who refuse to answer.

Under the NSL, 47 pro-democracy campaigners were arrested on February 28 for conspiracy to commit subversion related to the informal primary elections held in July for the pro-democracy group. Among the detained is Benny Tai, a former University of Hong Kong Professor and pro-democracy activist whose fight for universal suffrage eventually led to the umbrella movement and was key in organizing the primaries this past July.