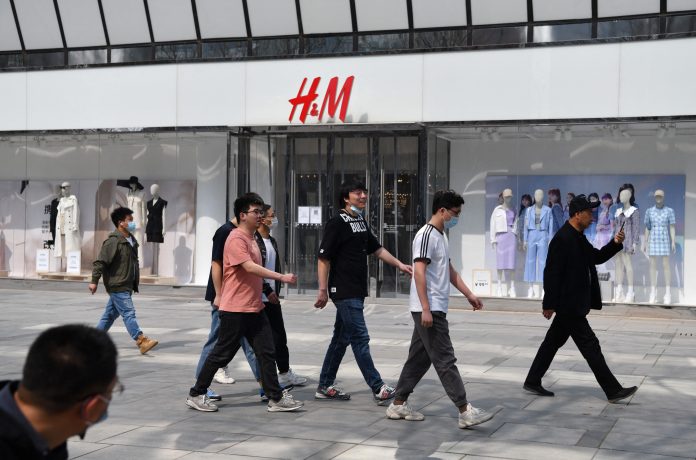 H&M had stated that it was “deeply concerned by reports from civil society organisations and media that include accusations of forced labour” and that it did not source products from Xinjiang, where more than one million Uyghur Muslims, members of other ethnic groups, and dissidents are believed to be incarcerated.

On March 25, Chinese official media went on to accuse other international brands like Burberry, Adidas, Nike, which had all issued similar statements recently. Facebook joined in, blocking about 100 fraudulent accounts associated with the Chinese Communist Party (CCP).

On March 24, Chinese state broadcaster CCTV and the Central Committee of the Communist Youth League criticized H&M, the world’s second-largest apparel brand. Two of China’s largest e-Commerce sites, Taobao and JD.com, have since removed the brand. The company’s celebrity endorsements in China have been cancelled as well.

The CCTV website published an article bashing H&M for biting the hand that feeds it, or “eating China’s rice while smashing China’s pot.” On March 25, CCP mouthpiece People’s Daily, posted on Weibo, China’s largest blogging site, an article with the headline “Western companies using Xinjiang cotton for extortion and blackmail leads to discontent.”In addition to calling out H&M, the post also named other members of the Swiss “Better Cotton Initiative” (BCI), such as Burberry, Adidas, Nike and New Balance, etc.

Last October, the global non-profit Better Cotton Initiative (BCI) issued a statement in English saying that it would no longer source its “Better Cotton” product from Xinjiang over concerns of forced labor. Founded in 2009, BCI’s membership mainly includes cotton farmers, cotton textile companies and more than 200 retail brands such as IKEA, Puma, Tesco, Gap and Uniqlo.

On March 24, Chinese sportswear brand Anta, a member of BCI, announced they were going to quit the Initiative.

After China singled out H&M and called for a “national boycott,” Chinese celebrities have cut ties with H&M. Actor Huang Xuan and actress Song Xi, both spokespersons for the brand, have announced that they are no longer working with H&M.

Other brands have also been affected. Nike’s official ambassador, Wang Yibo, originally scheduled to participate in a Nike event on the 26th, announced the termination of cooperation on March 25. As of the evening of March 25, the number of celebrities cutting ties with these international brands has reached 47. This not only includes stars in mainland China, but pro-CCP stars from Taiwan and Hong Kong.

Chinese state media has led to a boycott of foreign goods, though it’s unclear how motivated Chinese are to follow through.

One video circulating on the Internet that shows a shopping mall in Chengdu, Sichuan Province, where staff are removing H&M advertising signs and appear to be burning Nike sneakers outside. However, no black smoke can be seen in the clips, leading Chinese viewers to speculate that staff are “not willing to actually burn” the products.

Industry insiders who spoke with overseas Chinese-language media said that the sneakers looked shoddily made, and were probably knock-off goods rather than genuine Nike products.

On March 25, Facebook blocked nearly 100 accounts involved with Chinese hackers. These accounts are allegedly used to spread malware on Facebook to spy on the devices of Uyghur social activists, journalists and dissidents in the United States and Canada.

A growing number of countries has qualified the accusations of concentration camps and forced sterilization against Uyghurs and other minority populations in Xinjiang as ” genocide.” Since March 22, the EU, U.S. the United Kingdom, Canada, Australia, New Zealand, and Japan have all imposed sanctions or followed up with condemnations against a number of CCP officials and entities.