China has a history of around 5,000 years, but prior to the Qin Dynasty that began in 221 B.C., the concept of “China” was totally different than the one with which we are now familiar.

Much like Europe during the Middle Ages, China was run according to feudalism. One king reigned in the capital, while dukes provided him tribute and respect in exchange for the right to rule their own vassal states.

The Zhou Dynasty was the last of the feudal Chinese kingdoms. It began over 3,000 years ago and lasted around 800 years. By the second half of the dynasty, however, the Zhou royals no longer wielded any political authority. Real power was in the hands of the dukes, who began to call themselves kings. Bigger states conquered smaller states, and after hundreds of years, China was controlled by seven kingdoms — the Warring States.

In the 300s B.C., the state of Qin, located in western China, implemented a massive reform according to the ideology of Legalism. In successive wars and diplomatic schemes, Qin expanded in all directions.

But a great nation still needs great leaders to see it through to victory. In the year 246 B.C., 13-year-old Ying Zheng ascended to the Qin throne, while his mother Queen Zhao and her old lover, the merchant Lü Buwei, ran politics behind the scenes. More disturbingly, Queen Zhao conspired with her new lover, the fake eunuch Lao Ai, to usurp power completely and turn the throne over to Lao Ai’s illegitimate children.

Despite this treatment, Ying Zheng bided his time. Nine years later, at the age of 22, he had Lao Ai executed and put Queen Zhao under house arrest. Finally, he could rule in his own right.

Ying Zheng continued the sound Legalist policies that raised his country to greatness over a century earlier. In addition, he resisted the xenophobic opinions held by some of his officials and hired whoever was willing and capable of making Qin stronger — no matter where they were born.

As mighty Qin armies crushed the states of central China, a man acting on orders of the crown prince of Yan State paid a visit to Ying Zheng in the capital of Qin. The ambassador, Jing Ke, brought the head of a fugitive Qin general, as well as a map showing all the territories that Yan would cede to Qin in exchange for peace.

But at the very last moment, Jing Ke produced a hidden dagger and tried to kill Ying Zheng. The Qin king was able to dodge his blade, and, drawing his own sword, slew Jing Ke in the throne room. 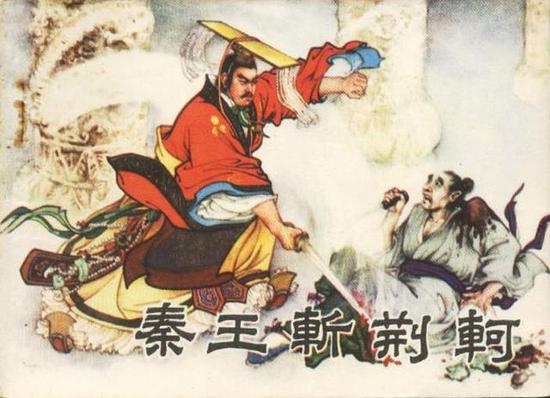 Jing Ke failed in his attempt to assassinate the king of Qin and was slain in the process. (Image: New Tang Dynasty Television)

A few years after Jing Ke’s failed assassination, in 221 B.C., Qin had conquered the rest of China.

King Ying Zheng now reigned unopposed over tianxia (天下) — “under heaven,” or the entire world known to the Chinese. With no more states or dukes, he felt that the title of “king” was no longer enough to express the majesty of his position. His attention turned to two Chinese characters, huang (皇) and di (帝). These were terms of ultimate respect reserved for the ancient rulers of China, as well as the gods. Ying Zheng combined these into one word, “huangdi,” and declared himself Qin Shi Huangdi (秦始皇帝), or the First Emperor of Qin.

Qin Shi Huang worried about the future of his empire and did what he could to prevent its disintegration. In the process, he united not only the territory of China and created a strong central government, but also mandated standardization of the Chinese language. Whatever their spoken dialect, the characters people used to write would be the same wherever they went.

The law under Qin was extremely strict. Even minor violations could be punished severely. In 210 B.C., Qin Shi Huang died. His enlightened son Fu Su should have succeeded him, but after generations of war, Qin’s officials were hardened men who lusted after profit and power. They usurped the throne and forced Fu Su to commit suicide.

The Qin Dynasty soon collapsed, lasting just 15 years. But the central authority, imperial majesty, and cultural unity that it created lasted for over two millennia. The foreign name “China” comes from the “ch” pronunciation of the “q” in Qin, and historians still remember Ying Zheng as Qin Shi Huang — the First Emperor.

True Number of Chinese Pandemic Deaths in the Hundreds of Millions, Says Founder of Falun Gong
Understanding the Traditional Chinese Calendar in the Year of the Rabbit
Master Li Hongzhi: How Humankind Came to Be
Xi’s Credibility Nosedives as CCP Loses Control Over Pandemic in China
China Staggers Under Huge Pandemic Losses