On May 13, millions of people around the world celebrate the spiritual discipline of Falun Gong, also known as Falun Dafa. This year, two U.S. flags were hoisted over the Capitol building in Washington in recognition of Falun Dafa and its founder, Mr. Li Hongzhi.

Li first taught Falun Dafa to the public on that day in 1992 in the northeastern Chinese city of Changchun, instructing a group of about 80 students in meditation exercises and moral self-improvement according to the principles of truthfulness, compassion, and tolerance. Since then, an estimated 70-100 million people in more than 100 countries have taken up the practice.

Adherents regard May 13 as World Falun Dafa Day. And while many officials around the world have issued proclamations in support of the practice before, this year marks the first time such an event happened at the U.S. federal level.

The flag-raising was requested by Pennsylvania Congressman Brian Fitzpatrick, and the flags were later mailed to a Falun Dafa practitioner residing in the state. 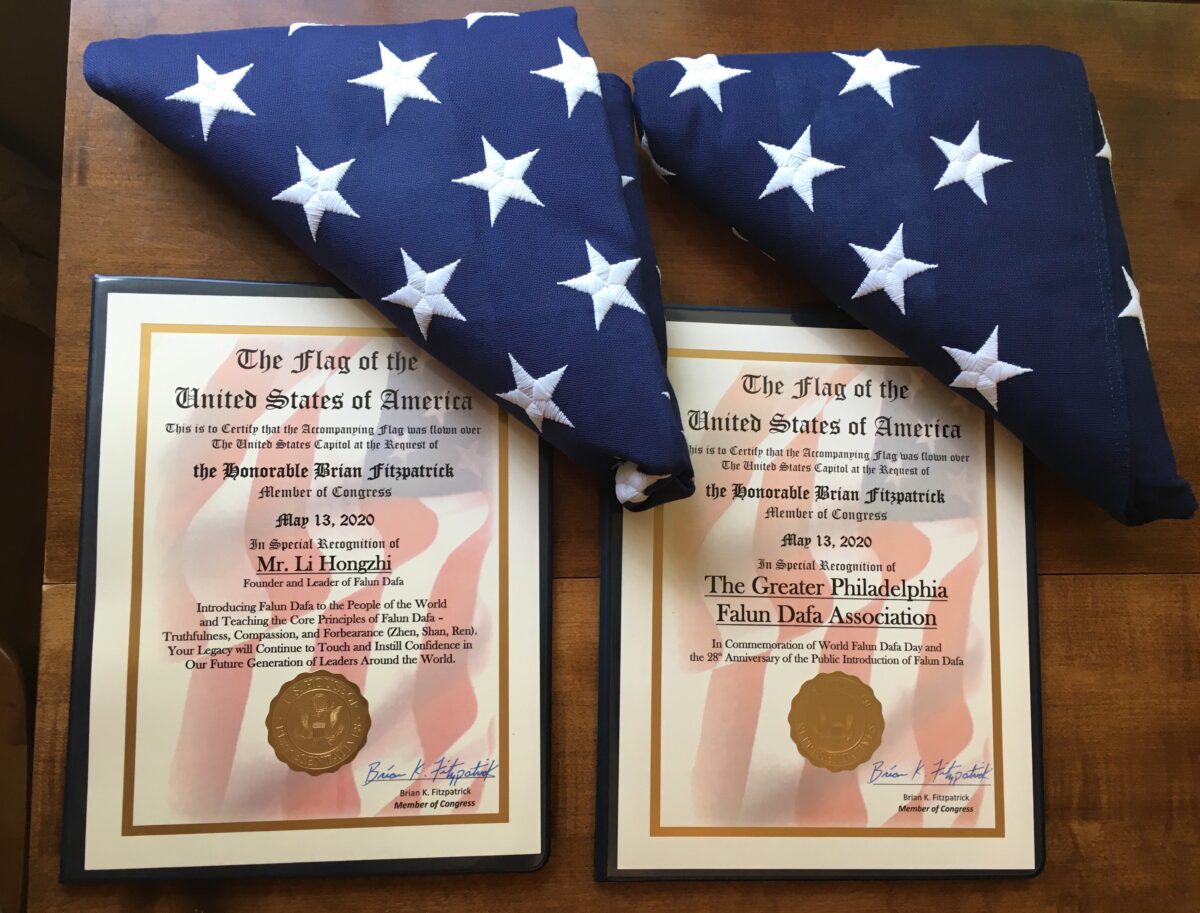 Certifications of the two American flags flown over the U.S. Capitol in honor of World Falun Dafa Day on May 13, 2020. (Image: Courtesy of Jennie Sheeks/via The Epoch Times)

Despite its peaceful and apolitical teachings, Falun Dafa has been persecuted in communist China since 1999, when then-leader Jiang Zemin saw the spiritual practice as a threat to Party rule.

More than 20 years after the repression began, the U.S. government is now taking the Communist Party to task for its persecution of the country’s various faiths.

“On World Falun Dafa Day, we strive to uphold the universal tenets of truthfulness, compassion, & forbearance, ideals that are fundamental to the expression of the Falun Gong faith,” Sam Brownback, the U.S. ambassador at large for international religious freedom, said on May 13 in a message of support on Twitter.

Falun Dafa is one of the most persecuted groups in China, along with Muslims and Christians. Under Jiang Zemin’s orders, Falun Gong practitioners who refused to give up their faith could be thrown into labor camps, tortured, or even killed for their organs. Human rights researchers investigating this crime believe that hundreds of thousands of people may have been murdered by the regime this way.

Elected officials in multiple countries expressed support for Falun Dafa on the anniversary of Li’s first teaching the practice in China, and called attention to the continued repression in China.

“This day recognizes the millions of people around the world that have found this ancient Chinese culture practice to be key in addressing stresses and anxiety of modern-day life,” Rep. Dwight Evans of Pennsylvania wrote in a letter. 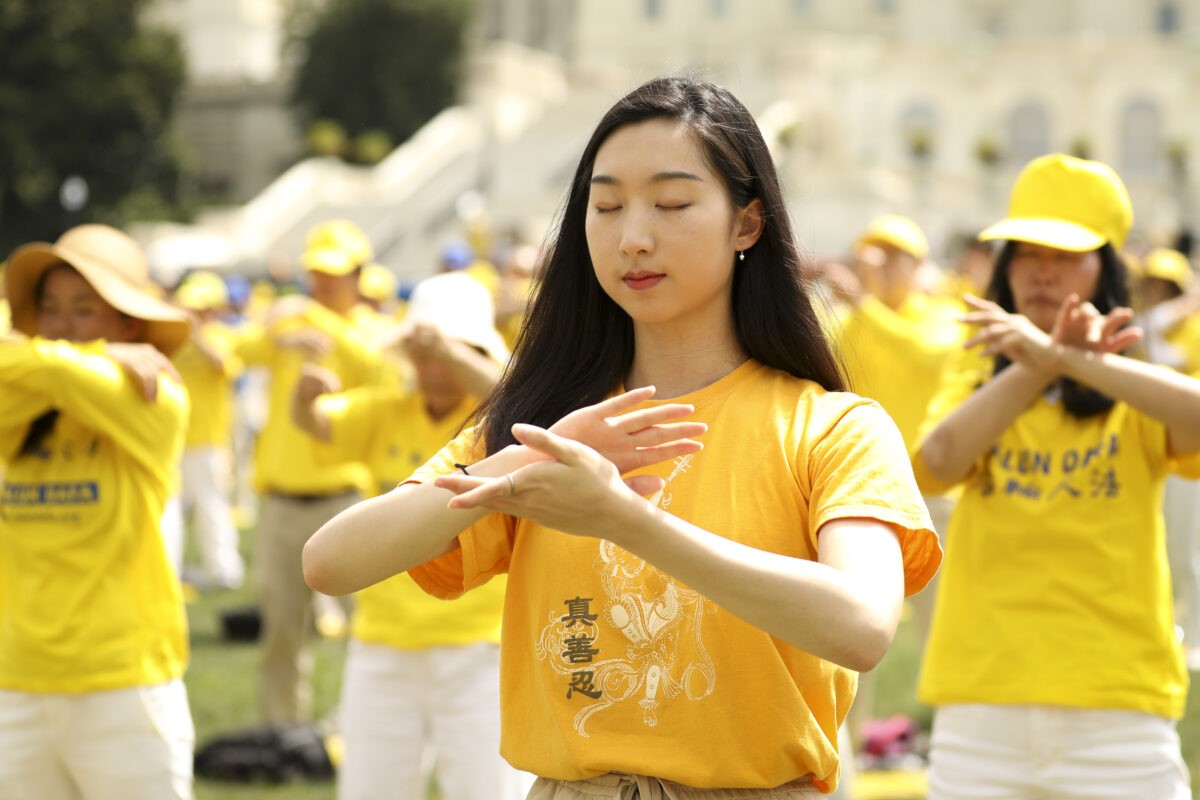 Falun Gong practitioners perform the exercises at a rally commemorating the 20th anniversary of the persecution of Falun Gong in China, on the West Lawn of Capitol Hill on July 18, 2019. (Image: Samira Bouaou/The Epoch Times)

In the more than two decades of persecution, Falun Dafa adherents and their supporters have sought to peacefully raise awareness about the practice and the Chinese Communist Party’s crimes. In China, human rights groups estimate that millions of practitioners are still active.

While World Falun Dafa Day usually involves large parades and meditation events, the COVID-19 pandemic this year means adherents have had to mark the occasion with activities at home or in small groups.

Tamara Jansen, a Conservative Party member of Canada’s Parliament, wrote: “Though the festivities are taking place in a different form this year, the Falun Dafa principles of truthfulness, compassion, and tolerance are being honored and celebrated.”

Another Witness Comes Forward to Expose Forced Organ Harvesting in China
Roe v. Wade Overturned After Half a Century of Imposing Abortion on All US States
Chinese Police Investigated Over Attack on Female Diners in Tangshan
Despite Ban, Hongkongers Gather to Mourn Tiananmen Massacre

Another Witness Comes Forward to Expose Forced Organ Harvesting in China
Chinese Police Investigated Over Attack on Female Diners in Tangshan
Despite Ban, Hongkongers Gather to Mourn Tiananmen Massacre
Roe v. Wade Overturned After Half a Century of Imposing Abortion on All US States