South Africa not only has great wildlife, but it is also home to 10 percent of the world’s flowering species. The Cape Floral Kingdom is a magnificent region situated in the province of Western Cape and it extends into parts of Eastern Cape province as well. Here, there is a spectacular landmark called Table Mountain, situated in the heart of Cape Town.

Table Mountain National Park supports an unbelievable diversity of plant species. There are over 9,000 plant species, 70 percent of which are endemic, that is, they are found nowhere else on the planet. Many of the country’s traditional remedies include the curative properties of the indigenous plants found here. Here are just a few of the most popular medicinal plants.

Referred to as South Africa’s “miracle herb,” buchu (Boegoe) is a powerful natural plant resource. The leaf has been used extensively by both the African people and the Khoisan indigenous people of the Cape as far back as the 1700s. Buchu has many uses. It’s great as a “smudge” to cleanse the air and carries a light peppermint fragrance.

Buchu is an effective diuretic and acts as a natural anti-inflammatory. It is usually drunk as a tea, and is excellent for the treatment of stomachaches, kidney infections, and for disinfecting the urinary tract. Buchu essential oil is used to prevent wounds from becoming septic. Buchu can be applied topically as an insect repellent, used as an antiperspirant, orto treat skin infections. 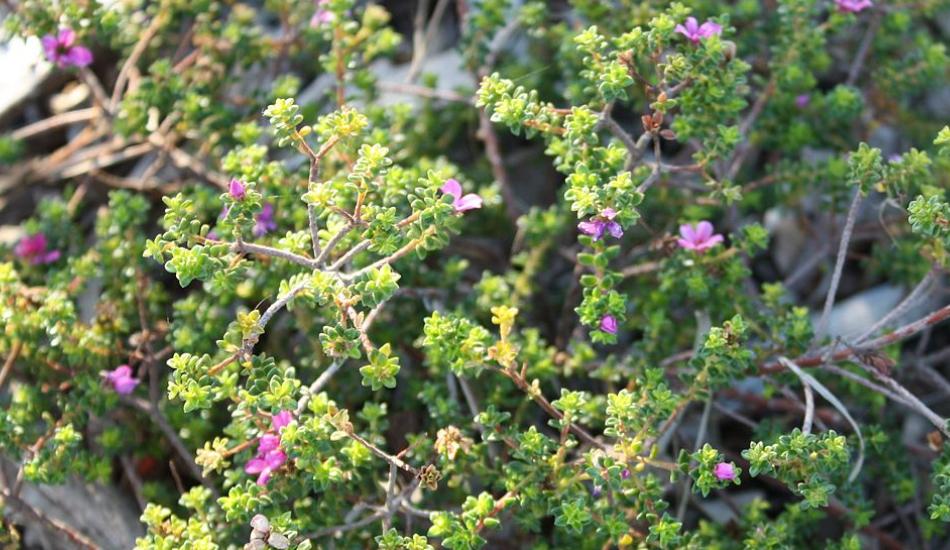 Growing on Table Mountain, it’s not possible to miss the orange-flamed flowers of the Aloe Vera. Within its dark green thorny leaves, the succulent has a thick gel. Rich in antioxidants, the plant contains powerful antibacterial properties belonging to a family of substances known as polyphenols.

The components found in the gel can stop the growth of harmful bacteria that cause infections in wounds. Studies suggest that it is an effective topical treatment for first- and second-degree burns. It has long been used to treat minor sores, and is also used as a mouth rinse to reduce dental plaque and help to speed up the healing of mouth ulcers.

Aloe Ferox is closely related to Aloe Vera. This is also known as “bitter aloe” and its extracts are from different parts of the entire plant. It has a wide range of uses, which range from a laxative to treatment for eczema, arthritis, conjunctivitis, stress, and hypertension. The plant’s anti-inflammatory properties are powerful and extremely effective. Many South African-based cosmetics include the gel found in the leaves as the main component of their products.

Rooibos means “red bush” in the Afrikaans language. It is an indigenous shrub that grows only on the beautiful Cederberg Mountains of Western Cape. Normally consumed as a tea, many South African mothers use it extensively for soothing colicky babies, and it is also often given to children as a deliciously warm and healthy drink.

The aromatic leaves contain many minerals, including magnesium, zinc, and iron. It is said to have 50 times more antioxidants than green tea. Rooibos is also rich in Vitamin C and low in tannins. What’s great about rooibos is that it is caffeine-free!

As a superior beauty product, rooibos tea extract is praised for its unique antioxidant properties that defy free radicals — a major cause of aging of the skin. According to a study, 20 women were observed for four weeks to investigate the efficacy of a couple of different herbal flavonoids. Rooibos came out on top with wrinkle reduction of 9.9 percent. Experts concluded that this result was achieved most likely because of the anti-aging effects of the anti-oxidants.

Known locally as “inkomfe,” or stargrass, traditional Zulu healers have always used it as a medicine to treat delirium, “bad blood” (diabetes), PMS, and it is used as a parasiticide. The African Potato can be used as a deep penetrating ointment to treat arthritis, psoriasis, and fibromyalgia. The African wild potato is also beneficial against skin conditions such as eczema, acne, scars, burns, rashes, bedsores, warts, stretch marks, sunburn, and insect bites.

The active ingredient of the African wild potato is hypoxoside, which is extracted from the roots. It has a very high sterol and sterolin content, which indicates it may include many anti-inflammatory and immune-strengthening properties. It’s reputed to be a great immune booster and is commonly used as a treatment for urinary tract infections, prostate hypertrophy, and testicular tumors.

Some theories have suggested the African potato could be helpful in the treatment of HIV/Aids, prostate cancer, and tuberculosis. The plant stem can also be ground into a raw powder and taken as a tea.

Clearing the Fog: 5 Things To Forgo for Better Focus – and 5 More To Embrace
Declutter Now – The Right Way To Get Rid of the Wrong Stuff
Fun Face Exercises for a Youthful Appearance
5 Ways to Overcome Procrastination

Three Meals a Day? Or Is There a Better Way?
Changing Minds With Compassion Rather Than Coercion
Breaking the Barrier of Frustration – 4 Tips for Learning Difficult Things
Declutter Now – The Right Way To Get Rid of the Wrong Stuff
Improve Your Emotional Intelligence to Master Important Social Skills