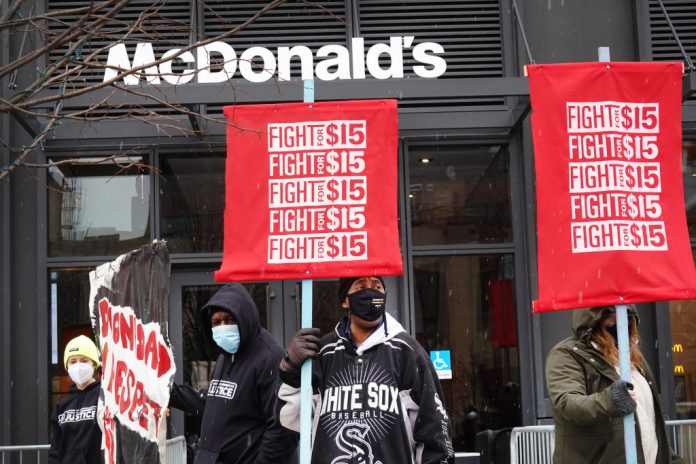 This month, the Congressional Budget Office (CBO) reported on its findings regarding the proposal to increase the federal minimum wage to $15 per hour. The current federal minimum wage stands at $7.25 per hour, but the Biden administration has proposed to increase the amount to $15 per hour gradually over the next several years in what is called the “Raise the Wage Act of 2021.”

Starting in June 2021, the proposed minimum wage would rise to $9.25 and have gradual increases annually until June 2025, when the rate will be $15 per hour. Subsequent years will raise the minimum wage according to annual indexing adjustments based on median wage growth. The minimum wage increase will apply to tipped workers, youth wage earners, and 14(c) workers (paid to people with disabilities).

The CBO reported that raising the minimum wage would impact the budget deficit, prices of goods and services, and changes in spending in federal programs. The policy could lead to a decrease in 1.4 million jobs as some businesses may cut employment to cope with rising labor costs.

The CBO calculates the budget deficit may rise by $54 billion between 2021 and 2031, with the first half of the period seeing the fastest gains in the deficit due to the minimum wage increase during that time frame. It is forecasted that prices for goods and services will rise as a response to the wage hike as businesses pass on the part of the rise in labor cost to the consumer.

The CBO forecasts an increase in federal spending on long-term healthcare as health workers will receive an increase in compensation with the rise in the minimum wage.

Also, unemployment compensation will rise as jobs are cut in response to the minimum wage hike. Although there will be increased spending on healthcare and unemployment insurance, other government services will decrease spending, such as nutritional programs. With an increase in wages will come an increase in revenue as the total rise in pay is forecasted to be $333 billion between 2021 and 2031.

Higher payrolls will increase federal revenue from individuals earning higher salaries but will result in less revenue collected from businesses that have a decrease in income.  Certain employers may respond to the minimum wage increase by shifting labor costs to technology that can replace workers in those roles.

As New Jersey increased minimum wages, fast food jobs increased 13 percent more than those in Pennsylvania. An increase in labor was followed by the rise in prices at the establishments in New Jersey.

The study results were duplicated by a 2019 New York Federal Reserve survey that looked at the impact of raising the minimum wage among retail and hospitality sectors along 19 counties at the New York-Pennsylvania border. As New York increased minimum wages and Pennsylvania kept their wages steady at the federal level, the report found both states decreased in the retail sector. Still, New York’s hospitality industry grew during the time of the survey.

The CBO predicts the “Raise the Wage Act of 2021” proposal will reduce poverty by 0.9 million. Still, a study by San Diego State economist Joseph Sabia and Cornell University economist Richard Burkhauser found no impact on increasing the minimum wage and decreasing poverty rates. Instead, it was the same group targeted by the rising minimum wage that felt the burden of job losses.

While the country considers raising the federal minimum wage level to $15 per hour, some locations around the country have done so ahead of the proposed federal increase.  Seattle and New York City have a $15 minimum wage rate and have found no negative impacts of the increase.

It would be difficult to say the same outcome will happen around the country as both locations have a good mix of white-collar workers that can shoulder the increase in goods and services that result from a higher minimum wage.