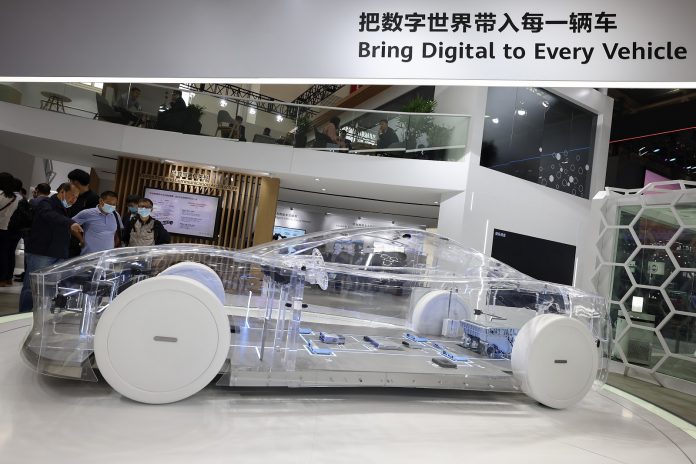 Chinese company Huawei, the world’s biggest telecommunication equipment maker, is planning to manufacture electric vehicles and could even launch a few models this year, according to four sources, Reuters reported on Feb. 26.

Huawei is in talks with Changan Automobile, BluePark New Energy Technology, and other auto manufacturers to use their plants as production centers. Huawei’s move to manufacture EVs is due to U.S. sanctions that have taken a significant toll on the company.

In 2019, the Trump administration had put Huawei on a trade blacklist over national security concerns, and blocked the sale of American technology and chips to the Chinese firm. Washington has also encouraged its allies to ban Huawei products, leading Huawei to take drastic losses over the past two years.

A report by market research firm TrendForce predicts Huawei to fall from third place in the global smartphone market in 2020 to seventh this year. According to research firm Canalys, Huawei’s smartphone sales fell by 44 percent domestically for the Oct-Dec quarter. Data from the International Data Corp (IDC) shows the company’s overseas shipments have fallen by 43 percent. The company’s market share shrank to eight percent in the quarter, trailing behind brands like Samsung, Apple, Oppo, and Xiaomi.

The question of Huawei branded cars

To boost revenue, Huawei has chosen to work within the EV market. However, a spokesman denied that the company would be directly involved in designing and producing Huawei branded cars.

“Huawei is not a car manufacturer. However, through ICT (information and communications technology), we aim to be a digital car-oriented and new-added components provider, enabling car OEMs (original equipment manufacturers) to build better vehicles,” the spokesman said in a statement.

The second patent is related to the Internet of Vehicles (IoV) security communications. Huawei has also published other auto-related patents this year, including a brake assist system and a method to detect pedestrians.

It isn’t just Communist China’s tech firms like Huawei that are interested in the auto industry. In the U.S., big tech companies like Alphabet (Google’s parent company) and Amazon have also invested in smart car startups and other auto technologies. Apple is working on an Apple Car and is seeking a partner to assist in the vehicle’s manufacture.

The U.S. ban on Huawei might help chip shortages, according to Qualcomm’s incoming CEO Cristiano Amon. The ban blocks Huawei from securing chips from Taiwan Semiconductor Manufacturing Co. (TSMC). Additional chip production facilities at TSMC will now be available for companies like Qualcomm.

However, Amon said that these opportunities might not be immediately available due to technology transfer issues. The chip shortage seems to have been triggered by pandemic-related production halts, increased purchases of electronic products, and the U.S.-China trade war. While the shortage affects companies’ production targets, the chip manufacturers benefit from high levels of demand.

“We believe semi companies are shipping 10% to 30% BELOW current demand levels, and it will take at least 3-4 quarters for supply to catch up with demand and then another 1-2 quarters for inventories at customers/distribution channels to be replenished back to normal levels,” J.P. Morgan analyst Harlan Sur said.