Lawmakers Introduce Bill to Recognize Taiwan as a Sovereign State 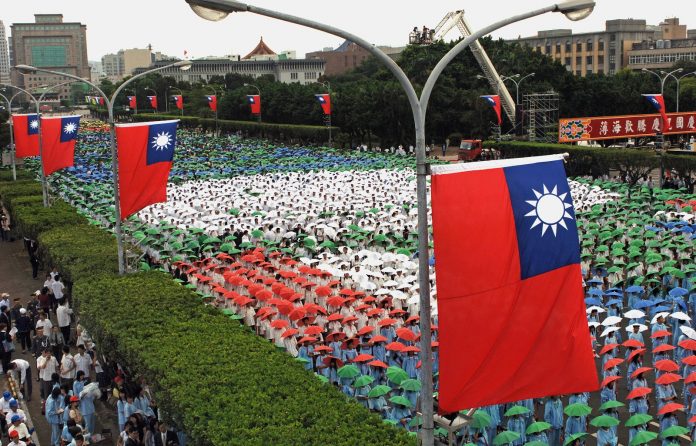 Republican Representatives Tom Tiffany and Scott Perry recently introduced legislation in the House seeking to recognize Taiwan — officially called the Republic of China — as a separate country from the communist-run Chinese mainland.

The bill aims to do away with America’s recognition of the “One China” policy, which leaves room for an ambiguous interpretation of Taiwan’s status. It would also commence negotiations for a U.S.-Taiwan Free Trade Agreement.

“For more than 40 years, American presidents of both political parties have repeated Beijing’s bogus lie that Taiwan is part of Communist China – despite the objective reality that it is not… It is time to do away with this outdated policy…

“As an independent Nation that proudly collaborates with Taiwan across a broad spectrum of issues, it’s long past time The United States exercised our sovereign right to state what the world knows to be true: Taiwan is an independent country and has been for over 70 years,” Tiffany said in a statement.

In 1979, Washington ended its diplomatic recognition of the ROC in favor of the People’s Republic of China (PRC), which claims Taiwan as a rightful part of its territory. The U.S. does not presently have any formal relations with Taiwan; its unofficial diplomatic relationship with the island is based on the Taiwan Relations Act (TRA), allowing Washington to sell military equipment to Taipei for the island’s self-defense.

A nonprofit organization called the American Institute in Taiwan (AIT) serves as a de facto U.S. embassy to the ROC.

President Reagan also passed the Six Assurances, which clarified that Washington does not recognize Beijing’s claim over Taiwan.

The ROC was founded in 1912, governing mainland China until being defeated by communist rebels in 1949. Its military and administration retreated to Taiwan, running the island under a dictatorship until undertaking democratic reforms in the late 1980s.

The bill proposes that Washington appoint an ambassador to Taiwan and receive a Taiwanese ambassador to the United States. At present, the ROC’s only official representative in the U.S. is from the Taipei Economic and Cultural Representative Office (TECRO).

The bill also asks that the administration advocate for Taiwan’s full membership in all international organizations where the U.S. is a member, such as the United Nations. Taiwan has long been denied a seat in the U.N. due to objections raised by communist China.

The Chinese Communist Party (CCP) maintains that it intends unify Taiwan with the PRC, using military force if necessary.

The PRC is currently planning to build a highway connecting Taiwan to the mainland. The proposal was unveiled as part of Beijing’s National Comprehensive Transportation Network Plan, outlining the communist regime’s transportation blueprint for the next 15 years.

“The new transportation network would include six axes, seven corridors, and eight thoroughfares, with a major axis running from Beijing to Tianjin, Hebei, Anhui, Guangdong, Hong Kong, Macao, and ultimately to Taipei.”

“The axis is to be a major highway and apparently would connect with Taipei via an underground tunnel beneath the Taiwan Strait. This would supposedly enable motorists to drive from Beijing to Taipei within 10 hours,” Taiwan News states.

Chinese Communist Party-run outlet, Global Times, claimed that people in Taiwan welcomed the plan with hopes that it will lead the island “out of poverty.” However, Taiwan’s lawmakers and netizens have blasted the highway with widespread criticism and mockery.