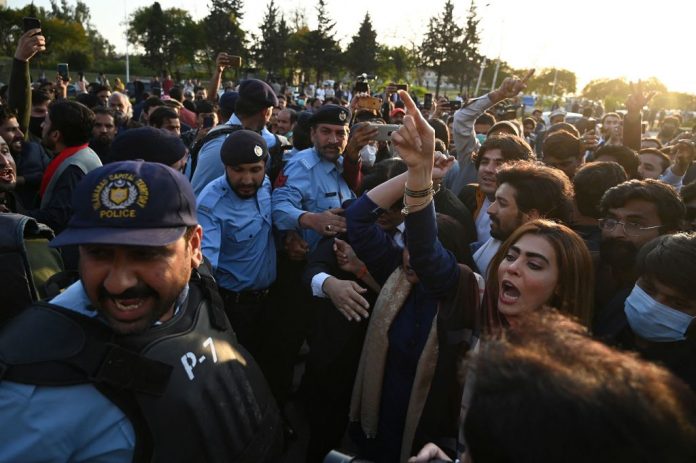 Pakistan’s Prime Minister Imran Khan made gains in his control over the Pakistan Senate after a candidate backed by his Party was elected as Chairman in a vote rife with controversy, strengthening Khan’s control over the country’s legislature.

Khan’s Pakistan Tehreek-e-Insaf Party backed Sadiq Sanjrani of the Balochistan Awami Party in the election. Sanjrani defeated opposition candidate Yusuf Raza Gilani by a vote of 48-42 in the 100 seat Senate. However, seven votes for Gilani and one joint vote for Sanjrani and Gilani were nullified after being “improperly stamped.”

An uproar was filmed in the Senate Chambers as voting members discovered “Chinese spy cameras” in the voting booth where a secret ballot to determine the Senate Chairman and Deputy Chairman was held.

Pakistan Senate member Muzaffar Hussain Shah supervised the vote and declared the eight deciding ballots invalid. Shah confirmed the presence of cameras in the booth, ordered a probe, and removed the devices, according to an ABC report.

According to WION News, Federal Minister for Science and Technology Fawad Chaudhry, in an attempt to debunk the claims, posted on twitter “one example of Spy Camera,” a picture of a camera small enough to fit into the crevasses of a screw head, adding that “detection of such cameras is impossible.” His defense was the cameras found in the Pakistan Senate were not spy cameras, but closed circuit television cameras placed in the voting booth where Senators would cast their votes.

A report by Dawn, said election officials had instructed that the stamp Senators used to select their choice on the ballot would be considered valid so long as it was placed inside the checkbox on the voting card.

However, on Pakistani social media it was said in unconfirmed reports that the seven disqualified voters were instructed to put an additional stamp “on the name of Mr Gilani as a mark of confirmation that they had voted for him as the party was doubtful about their commitment,” and “five of these senators had been asked to put the stamp at five different places i.e. on the words ‘Senator,’ ‘Syed,’ ‘Yousuf,’ ‘Raza,’ and ‘Gilani’ whereas the two others had been asked to put the stamp on two parts of Mr Gilani’s name.”

It appears from reports available in the English language that the spy cameras found in the Pakistan Senate were merely a Chinese-brand of spy cameras, with no claims that the cameras were placed by the Chinese Communist Party (CCP) or its agents. However, concerns still surround the  security and integrity of the election, since these Chinese cameras were found present in what was supposed to be a secret ballot of elected officials.

Last week, a Switzerland based hacktivist group accessed surveillance firm Verkdata and gained access to the footage of more than 150,000 cameras stationed at Tesla, Cloudflare and inside U.S. federal prisons, hospitals, and health clinics. The group released footage to the public, such as a Verkdata employee who installed one of his company’s cameras inside his home completing a puzzle with his family.

Pakistan Senate and the CCP’s Belt and Road

According to International The News, Sanjrani hosted a dinner with outgoing Chinese Ambassador Yao Jing in 2019, calling his country’s close relations with the CCP “historic and exemplary,” while adding “all political forces are united in their relations with China.”

The BRI project between China and Pakistan is referred to as the China Pakistan Economic Corridor (CPEC), which Sanjrani praised during a December 2020 teleconference with Kyrgyzstan, dubbed “Re-imagining the Silk Road: Kyrgyzstan and Pakistan in the Age of Connectivity.” Sanjani claimed that more than 3,000,000 citizens would benefit from the installation of the CCP’s globalist bid.

A report by the Center for Strategic and International Studies titled “It’s a (Debt) Trap! Managing China-IMF Cooperation Across the Belt And Road” warned of the debt trappings for countries in the Pakistani region which have readily accepted money from China’s communist regime, “Eight BRI recipient countries—Djibouti, Kyrgyzstan, Laos, the Maldives, Mongolia, Montenegro, Pakistan, and Tajikistan—are at a high risk of debt distress due to BRI loans.”

“These countries will all face rising debt-to-GDP ratios beyond 50 percent, with at least 40 percent of external debt owed to China once BRI lending is complete. These countries will need support to service BRI loans as repayments peak and will likely turn to the IMF and other smaller lenders. Discussions for an IMF bailout have already begun in Pakistan, where China has invested $62 billion, or one-fifth of Pakistan’s GDP, in infrastructure and energy projects.”

In 2019, state-run China Construction completed a 244 mile highway from Punjab to Sindh Province as part of the CPEC. Of the CPEC itself, Foreign Policy said in a 2019 article, “Since it launched in 2015, the project’s total cost has increased from about $45 billion to $62 billion, with Pakistanis expecting new roads and railways, industrial zones, and local jobs.”

“While there has been an increase in infrastructure jobs for Pakistani workers, most of the top-level technical jobs have gone to Chinese workers, with an estimated 10,000 Chinese working in Pakistan.”

In Myanmar, ousted leader of the National League for Democracy Aung San Suu Kyi signed 33 BRI agreements with the CCP in January of 2020. Her contracts sought to install a similarly-named “China-Myanmar Economic Corridor,” granting China a railroad from the eastern border of Burma to the Bay of Bengal where a deep sea port for China would be installed, and a “New Yangon City” industrial and commercial area developed by CCP state-run construction companies in the nation’s most populous city, Yangon.