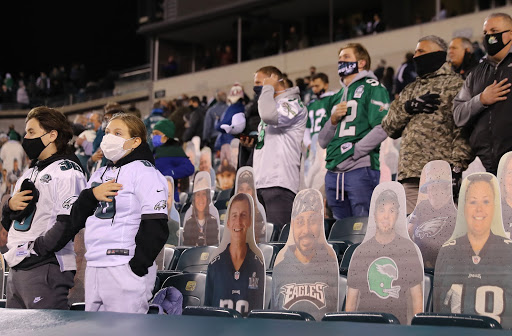 On Sunday, when Tom Brady’s Tampa Bay Buccaneers face off against Patrick Mahomes’ Kansas City Chiefs in the 55th iteration of the iconic American football championship, more than half the fans normally in attendance will be replaced with cardboard cutouts in order to comply with the notion of “social distancing.”

As the world insists on increasingly more bizarre and abstract measures to combat the SARS-CoV-2 novel coronavirus pandemic, which causes the disease the World Health Organization coined Coronavirus Disease 2019 (COVID-19), this year’s Super Bowl is also the first time in history a finalist has played in its home stadium.

Tampa Bay will play with the home-field advantage on Raymond James Stadium and it will also be quarterback Tom Brady’s 10th trip to the championship.

The NFL boasts that it has not had to cancel a single game this season due to the pandemic, and can be commended for being the only major sports league in North America to have actual human beings routinely attending games.

The League has also announced that of the 25,000 real humans allowed to attend the Super Bowl, 7,500 will be health care workers, mostly from hospitals and health care systems in Tampa and Central Florida. However, there is one caveat: invited health care workers must have received both doses of a COVID-19 vaccine.

“These dedicated health care workers continue to put their own lives at risk to serve others, and we owe them our ongoing gratitude,” said NFL Commissioner Roger Goodell.

In saying: “This is also an opportunity to promote the importance of vaccination and appropriate health practices, including wearing masks in public settings,” the Commissioner made it clear that the invitation was really a public relations token to promote compliance with getting jabbed and wearing masks in the public.

Vaccine acceptance has been a hot topic since they became available under FDA Emergency Use Authorization (EUA) in late 2020. The reason for the controversy around them is because they are experimental and were produced on very short timeframes.

While regular vaccines we are familiar with often undergo 5- to 20-year approval processes in multi-stage clinical trials, according to The New York Times, the Pfizer-BioNTech vaccine did not enter Phase I and II clinical trials until May, yet the pharmaceutical giants were granted an EUA approximately 6 months later on Dec. 11.

Also, conventional vaccines inject a weakened or inert form of the pathogen into your body in order to stimulate immune cell response, while this current generation of COVID-19 vaccines is a new type called mRNA (Messenger RNA) vaccines.

As for how these work, the UMass Medical School describes the process in general, beginning with DNA: “DNA is a long, double-stranded molecule made up of bases, located in the cell’s nucleus. The order of these bases determines the genetic blueprint, similar to the way the order of letters in the alphabet are used to form words. DNA’s ‘words’ are three letters (or bases) long, and these words specifically code for genes, which in the language of the cell, is the blueprint for proteins to be manufactured.”

“To ‘read’ these blueprints, the double-helical DNA is unzipped to expose the individual strands and an enzyme translates them into a mobile, intermediate message, called ribonucleic acid (RNA). This intermediate message is called messenger RNA (mRNA), and it carries the instructions for making proteins. The mRNA is then transported outside of the nucleus, to the molecular machine responsible for manufacturing proteins, the ribosome.”

According to the U.S. Centers for Disease Control, the mRNA used in the vaccines instruct your cells to manufacture the Spike Protein from the SARS-CoV-2 virus. Spike Proteins are the portion of a coronavirus that gives it the distinct “crown” shape and are also what the virus uses to bind to and enter human cells.

Cardboard fans aren’t an entirely new phenomenon. Major League Baseball has been using them since at least July of last year. In an article on MLB.com titled “The Cardboard Cutout Revolution is Real,” the league attempts to spin the disagreeable trend into a positive story.

“When we looked across the league, we noticed that everybody was doing cutouts. I think at the Twins we’re always just looking how we can do things differently. We thought this was a unique play on a trend that was already happening and putting our own spin on it,” Senior Manager of Special Events and Promotions for the Minnesota Twins, Mitch Retelny, said.

“So far, the response has been overwhelmingly positive on the Big Head concept that we’re running with.”

For fans who are not willing to spend a small fortune, they can “attend” virtually by purchasing a cardboard cutout in their own image, for a mere $100.