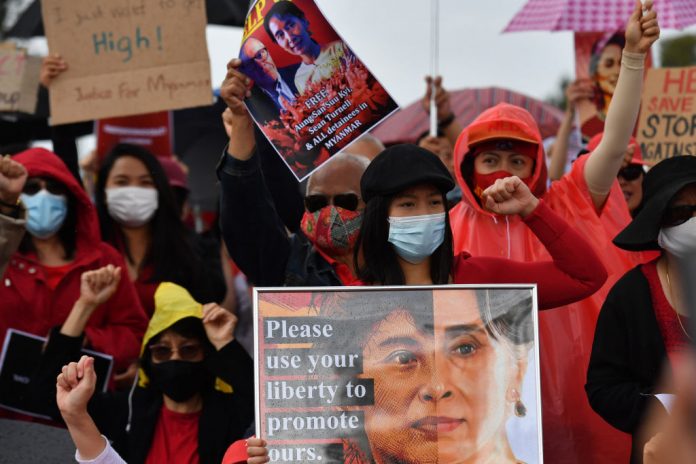 International eyes are on the Southeast Asian nation of Myanmar after a military takeover that occurred amid allegations of a fraudulent election. The U.S. and the United Nations have labelled the situation a coup d’état, condemning the military’s takeover and use of violence against peaceful protestors. U.S. President Joe Biden recently announced sanctions against the Myanmar military, which will be in place unless they accept the outcome of the election and release the winner and leader of the National League for Democracy (NLD), Aung San Suu Kyi and her top officials.

In a speech given at the Whitehouse, Biden said that the situation in Myanmar is of deep bipartisan concern. He said that the U.S. has “been in close contact with our allies and partners around the world, particularly in the Indo-Pacific region, driving vigorous diplomatic outreach to help coordinate an international response to what happened.”

Biden’s press secretary Jen Psaki also emphasized that the U.S. would be working together with allies, mentioning there were “ongoing discussions and talks with our partners and allies in Asia and Europe,” adding “there’s certainly a recognition that this will need to be a coordinated effort.”

The latest from BBC, is that the UK, EU and Australia have all condemned the military takeover, while China blocked a UN Security Council statement condemning the coup. China has previously opposed international intervention in Myanmar, and urged all sides to “resolve differences.”

The neighbouring countries of Cambodia, Thailand and Philippines have said that the conflict is an “internal matter”.

Biden said that he would direct sanctions in Myanmar towards the military leaders who were involved in carrying out the coup, their business interests and their close family members. “We’re freezing U.S. assets that benefit the Burmese government, while maintaining our support for healthcare, civil society groups, and other areas that benefit the people of Burma directly,” Biden said. “We’ll be ready to impose additional measures, and we’ll continue to work with our international partners to urge other nations to join us in these efforts.”

The Myanmar military, known as the Tatmadaw, announced via their television station they had declared a state of emergency for one year. The Tatmadaw claimed that their takeover was lawful and based on their constitution, alleging massive voter fraud in their November election.

The individual attracting the most attention in this conflict is the winner of the election and leader of the NLD, Aung San Suu Kyi, a member of the globalist World Economic Forum (WEF) and Nobel Peace Prize recipient. She was at one point highly esteemed internationally, until her fall from grace after denying the geoncide of Rohingya Muslims in the country. Some believe that her denial of genocide was out of fear of conflict with the military who would put her under arrest again if she was to condemn their actions for being genocidal.

According to BBC, after the military coup, Aung San Suu Kyi was charged with illegally importing communications equipment. According to reports, Police claimed they found “seven walkie-talkie radios” in her home, which she possessed without authorization.

Aung San Suu Kyi is familiar with being detained by the military, as from 1989-2010 she spent 15 of the 21 years under house arrest. While under house arrest, she was isolated, and was not allowed to see her family. When her husband got sick, the military was willing to let her go to the UK to see him, but she did not go because she was afraid of not being let back into the country. Her husband died of cancer in March 1999 without her being able to see him.

Aung San Suu Kyi was born in Myanmar, married in India and obtained University education in the UK, where she found her husband. After working in Japan and Bhutan, she settled in the UK to raise her two children. In 1988, she went back to Myanmar to help look after her sick mother, at which point she was motivated by the non-violent campaigns of Martin Luther King and Mahatma Ghandi, to travel around Myanmar calling for democracy and free elections, until she was suppressed by the military. Then in 1990, the military called elections, which she convincingly won. Similar to the reports of recent events, the military refused to hand over control and put her under house arrest. All this contributed to her international notoriety and Nobel Peace Prize.

In December 2019, Aung San Suu Kyi appeared in front of the International Court of Justice (ICJ) to discuss the allegations of genocide, where she eloquently side-stepped the allegations with her use of rhetoric. She claimed that the genocidal acts were being addressed in court and that the Arakan Rohingya Salvation Army (ARSA) received weapons and training from Afghan and Pakistani militants, explaining that the conflict in the region was complex.

She exclaimed to the court, “Please bear in mind this complex situation and the challenge to sovereignty and security in our country when you are assessing the intent of those who attempted to deal with the rebellion. Surely, under the circumstances, genocidal intent cannot be the only hypothesis.”

“It cannot be ruled out that disproportionate force was used by members of the Defence Services in some cases in disregard of international humanitarian law, or that they did not distinguish clearly enough between ARSA fighters and civilians. There may also have been failures to prevent civilians from looting or destroying property after fighting or in abandoned villages. But these are determinations to be made in the due course of the criminal justice process, not by any individual in the Myanmar Government,” she said to the ICJ.

Aung San Suu Kyi and her NLD government have also faced criticism for prosecuting journalists and activists using colonial-era laws, but still remain highly popular in Myanmar, as pollsters have reported the approval among the people of Myanmar only increasing. Derek Mitchell, a former U.S. Ambassador to Myanmar told BBC that, “The story of Aung San Suu Kyi is as much about us as it is about her. She may not have changed. She may have been consistent and we just didn’t know the full complexity of who she is,” and that “we have to be mindful that we shouldn’t endow people with some iconic image beyond which is human.”