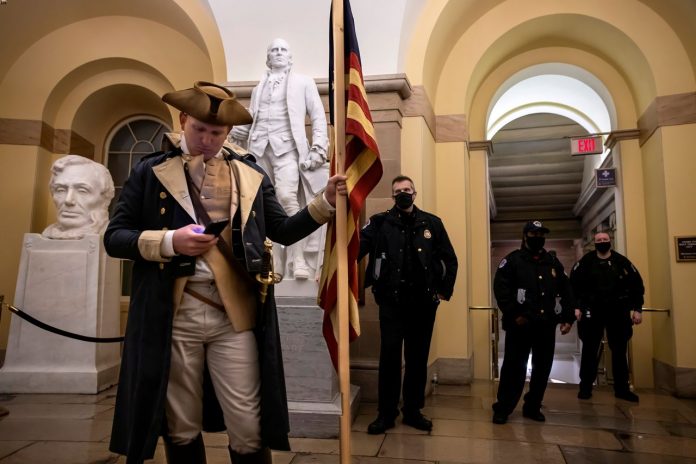 Thirty-five members of the Capitol police are under an internal investigation, though officials did not elaborate on the reasons. It is speculated that some of these officers stood motionless as people walked into the Capitol building on Jan. 6. A few people who entered the building claimed that the officers even let them in.

“Our Office of Professional Responsibility is investigating the actions of 35 police officers from that day. We currently have suspended six of those officers with pay. Acting Chief Yogananda Pittman has directed that any member of her department whose behavior is not in keeping with the Department’s Rules of Conduct will face appropriate discipline,” the U.S. Capitol Police said in a statement.

Investigators are searching through officers’ social media posts due to allegations that some of the officers might have been involved with the breach. Representative Democrat Tim Ryan, who chairs the funding committee that oversees the Capitol Police, said that one of the suspended officers took a selfie with a rioter. Another officer gave directions to the rioters and was wearing a ‘Make America Great Again’ hat.

In an interview with CBS8 last month, Papathanasiou explained that 140 officers from the USCP and Metropolitan Police Department were injured during the riots. Some of the officers were never issued helmets for protection against the protesters and suffered brain injuries. By an overwhelming 97 percent, the Union had voted “no confidence” in Ben Smith, the Capitol Police Captain. Yogananda Pittman, appointed as chief two days after the Capitol attack, also received a “no confidence” vote from union members.

The razor wire-topped Capitol fence erected after the Jan. 6 breach might stay up until September. According to an AP report, authorities track continued threats against the Capitol and lawmakers. Security experts have suggested that the fence be kept in place. Extremist groups have been found discussing returning to the Capitol in the “coming weeks.”

Pittman suggested that a permanent fence be set up around the Capitol. The National Guard posted at the Capitol might also remain after the scheduled exit in March. Pentagon Press Secretary John Kirby said that the situation is being evaluated.

“The plan right now is to end this mission in the capital region by about the middle of March. That’s still the plan. And that’s what we have sort of resourced ourselves out to… We’re obviously constantly in touch with the Department of Homeland Security, the Secret Service, and D.C. officials about the need, about the requirement… We plan for all kinds of contingencies that actually don’t ever happen. And so there were some internal discussions about, well, what if we needed to keep them longer? What would that look like? That’s what we’re expected to do,” he said in a statement.