12 States File Lawsuit Against Biden Over Executive Order on Climate 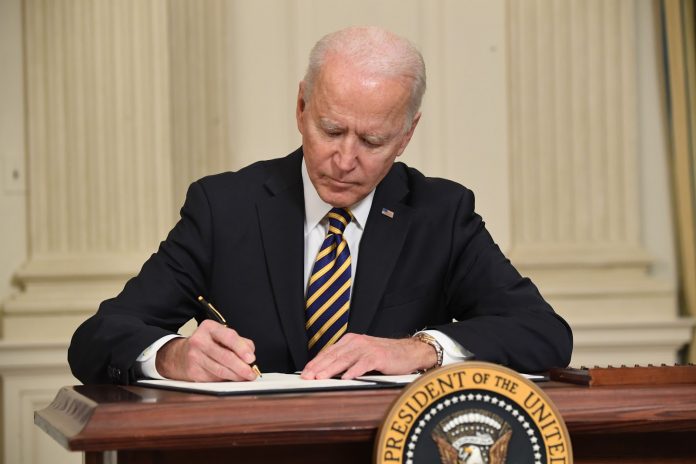 A group of 12 states, led by Missouri Attorney General Eric Schmitt, has filed a lawsuit against President Biden over a climate-related executive order which they believe would have a devastating impact on their states’ economies. The other states are Arkansas, Nebraska, Arizona, Oklahoma, Indiana, Ohio, Kansas, Tennessee, Utah, Montana, and South Carolina.

“If the Executive Order stands, it will inflict hundreds of billions or trillions of dollars of damage to the U.S. economy for decades to come… It will destroy jobs, stifle energy production, strangle America’s energy independence, suppress agriculture, deter innovation, and impoverish working families. It undermines the sovereignty of the States and tears at the fabric of liberty,” the lawsuit states.

It also accuses Biden of setting up ‘social costs’ of greenhouse gases in a speculative, indeterminate manner. Such ‘social costs’ total $9.5 trillion, including $8.24 trillion assigned to nitrous oxide, $990 billion for methane, and $269 billion for carbon dioxide.

According to Article 1, Section 1 of the Constitution, only Congress has the exclusive authority to assign such values.

By calculating such speculative ‘social costs,’ the Biden administration can potentially justify imposing trillions of dollars in regulatory costs on the American economy annually as a means to offset such costs. Moreover, Washington can use it to expand federal regulatory power to intrude into Americans’ everyday lives, from their grocery bills to vehicles and so on.

Schmitt said that sectors like agriculture, manufacturing, and energy production employ thousands of Missourians and are critical to its prosperity. By enacting Executive Order 13990, which Biden does not have the authority to pass, Schmitt warned that hard-working Missourians could be “left in the dust.”

Biden’s policies will cause massive job loss and force people to pay higher energy bills, which is why Schmitt formed the coalition for the lawsuit. The case was filed at a federal court in the Eastern District of Missouri on March 8.

Executive Order 13990 also revoked the Keystone XL pipeline permit, which many industry experts warned would push many people into unemployment. Biden signed several executive orders on Jan. 27 with climate change as a national security concern. Climate change was a key agenda during Biden’s presidential campaign, something he called “an existential threat.”

According to the executive order, the Biden administration will also be reviewing future federal oil and gas leasing programs. On March 25, the Interior Department will host industry experts, natural resource advocates, environmental justice organizations, and so on to discuss the issue.

“It’s time to take a close look at how to best manage our nation’s natural resources with current and future generations in mind… This forum will help inform the Department’s near-term actions to restore balance on America’s lands and waters and to put our public lands’ energy programs on a more sound and sustainable conservation, fiscal and climate footing,” Daniel-Davis said in a statement.

The pause on oil and gas leases has attracted criticism from lawmakers on both sides of the political spectrum. Some worry that existing operations could be shut down if delays continue in granting permits. Some experts also warned that it could drive already escalated gas prices even higher.

The Federal Bureau of Investigation (FBI) has continued to conduct warrantless surveillance under Section 702 of the Foreign Intelligence Surveillance Act (FISA) and commit...
Read more
US