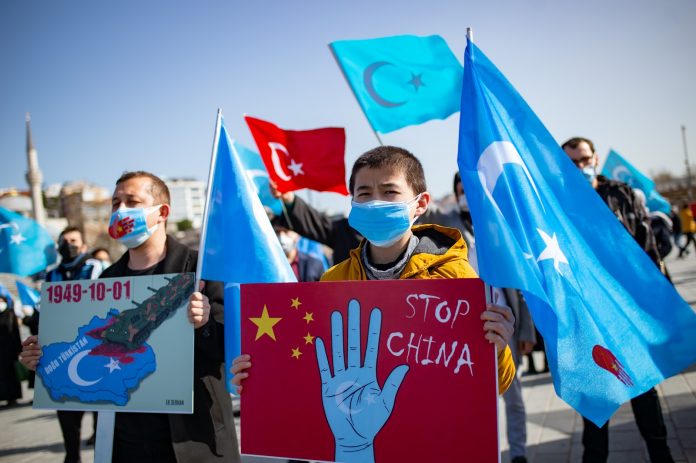 A recent report by New Lines Institute, a Washington D.C. think tank, has determined that Communist China’s crimes against the Uyghur minority in the Xinjiang autonomous region can be classified as genocide.

The report did not make any specific calls for action but wanted to make the information available for further research. A team of independent experts gathered information from leaked Chinese state communications, eye-witness testimony, open-source research methods such as public satellite image analysis, analysis of information circulating on the Chinese internet, and any other available source. The team analyzed the data and concluded that there is sufficient evidence to indicate an “intent to destroy” the Xinjiang region’s Turkic Muslim group.

Xi Jinping launched the “People’s War on Terror” in 2014, which was purportedly aimed at preventing terrorism and de-extremification, but resulted in widespread genocidal crimes. Evidence shows that officials were ordered to “round up everyone who should be rounded up,” “wipe them out completely … destroy them root and branch,” and “break their lineage, break their roots, break their connections, and break their origins.”

Officials described Uyghurs in dehumanizing terms and repeatedly likened the mass internment of Uyghurs to “eradicating tumors.” Their religious thinking was equated with being a virus in need of Communist release. The policy stated things like, “Freedom is only possible when this ‘virus’ in their thinking is eradicated.” The re-education camps’ stated goal was to “wash brains, cleanse hearts.”

The government initiatives in Xinjiang provide free female sterilization. Women of childbearing age in detention centers are forced to undergo tubal ligation. It would also coerce, incentivize, and actively promote Han-Uyghur marriages, where the Uyghur religion and culture are hoped to be forgotten. State-run media parrot the language of Western feminist ideology, claiming that that the goal is to ensure that Uyghur women are “no longer baby-making machines.”

Many documented accounts of brutal and obscene rapes are committed against women in the detention centers. “They don’t only rape but also bite all over your body, you don’t know if they are human or animal … They didn’t spare any part of the body, they bit everywhere leaving horrible marks. It was disgusting to look at,” one victim claimed.

Children are sent to state-run facilities, where they are raised under Han child-rearing methods, while parents are subjected to forced labor and re-education. The Chinese communist state has “eliminated Uyghur education, destroyed Uyghur architecture and household features, and damaged, altered, or completely demolished the vast majority of mosques and sacred sites in the region while closing off other sites or converting them into commercial spaces,” according to the report.

The report also tells of acts of outright murder, stating that Uyghur leaders have been sentenced to death by execution or long-term imprisonment, in addition to the torture and strategic humiliation committed against Uyghurs in detention camps.

Genocide under every aspect of the law

The New Lines Institute concludes that because of the acts committed by the Chinese state against the Uyghur people, it qualifies as genocide under every subsection of article 2 of the 1948 Convention on the Prevention and Punishment of the Crime of Genocide, which states that genocide occurs when any of the following acts committed with intent to destroy, in whole or in part, a national, ethnic, racial, or religious group such as:

(a) Killing members of the group;

(b) Causing serious bodily or mental harm to members of the group.

(c) Deliberately inflicting on the group conditions of life calculated to bring about its physical destruction in whole or in part.

(d) Imposing measures intended to prevent births within the group.

(e) Forcibly transferring children of the group to another group.

Meanwhile, Chinese Foreign Ministry spokesman Zhao Lijian stated at a press conference on Mar. 10 that the claim of genocide is something “cooked up” as strategical U.S. rhetoric.

“The claim of ‘genocide’ in China’s Xinjiang is ludicrous and baseless. It’s an outright ill-intentioned rumor and lie. The United States should not make such an accusation with no proof at all. China firmly opposes groundless attacks and smears. The United States endorsement of disinformation, lies, and rumors only further damages its credibility and image,” Zhao said.

He further tried to counter the claim by stating that the Uyghur population doubled over the past four decades, he then blamed the U.S. for genocide against the Native American population in 1492.

“China is willing to have dialogue and exchange on human rights with other countries on the basis of mutual respect and equal-footed treatment, but we resolutely oppose fabrications, slanders, and interference in others’ internal affairs under the pretext of human rights,” Zhao said.