Home US Marjorie Taylor Greene: ‘GOP Belongs to Trump’
US 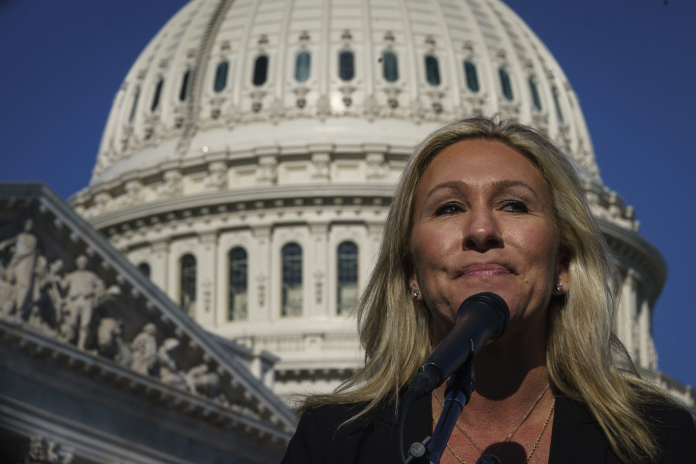 Republican Marjorie Taylor Greene, who was recently removed from two committee posts by the House due to her past actions and comments, has reaffirmed her support for Trump. In a statement given to reporters at Capitol Hill, Greene defended the former president, noting that he still has the support of many Republicans.

Trump committed to helping the GOP win back the House majority in the 2022 elections The ex-president will soon be facing his second impeachment trial, which, if passed, would bar him from running for the White House in the 2024 presidential race.

“He was a president that didn’t care about your skin color because God created us all equal… He was a president that wanted every single person to achieve, and that’s why we support him. That’s why I’ve always supported him, and I want to tell you Republican voters support him still. The party is his — it doesn’t belong to anybody else… They [Americans] loved his policies. They loved his fight… They love the fact that for once we had a president that stood up for America, stood up for American businesses, and remembered the forgotten man,” she said in a statement.

The decision to strip Greene from her committee posts was passed by 230-199 votes in the House, mostly along party lines. However, there were 11 Republicans who supported her removal. Greene accused the 11 Republicans of having committed a big betrayal and warned that such actions could cost the Republican Party their aim of a House majority in the 2020 election.

The resolution against Greene did not specifically cite the conduct for her exile. In the past, Greene has supported the QAnon conspiracy theory of a global elite ring engaged in pedophilia and Satanism. Plus, many of her social media posts seemed to encourage violence against Democrats, with one video from 2019 showing Greene commenting that Nancy Pelosi deserved death as she was a traitor.

Before counting the votes to dismiss Greene, Pelosi stated that she was concerned about the Republican Party accepting an “extreme conspiracy theorist.” Democrat Chuy Garcia from Illinois dismissed Greene’s apology speech on the floor, saying that he did not sense any remorse in her words.

“I have never encountered a situation like the one before us now, where a member has made such vile, and hurtful statements, engaged in the harassment of colleagues and expressed support for political violence,” House Majority Leader Democrat Steny Hoyer said in a statement.

Even Republican Senator Mitch McConnell blasted Greene, calling her a “cancer for the Republican Party.” However, House Minority Leader Republican Kevin McCarthy strongly opposed Greene’s removal, who accused the Democrats of using their majority power of expelling her from the committees.

Yet, the Democrats decided to remove her, something he says is an abuse of power in a way that has never happened in the House’s history. He warned that when someday the GOP is back in control of the House, the numerous Democrats who have made similar statements will be facing a tough time.

For example, he pointed to Democrat Ilhan Omar, who once made the anti-Semitic statement that “Israel has hypnotized the world.” Meanwhile, Greene is okay with being expelled from the House as she believes it would have been a waste of time given Democrats’ control of the House and the committees.