Home US Western Nations Take Aim at China for Uyghur Persecution; Japan Stands Out
US 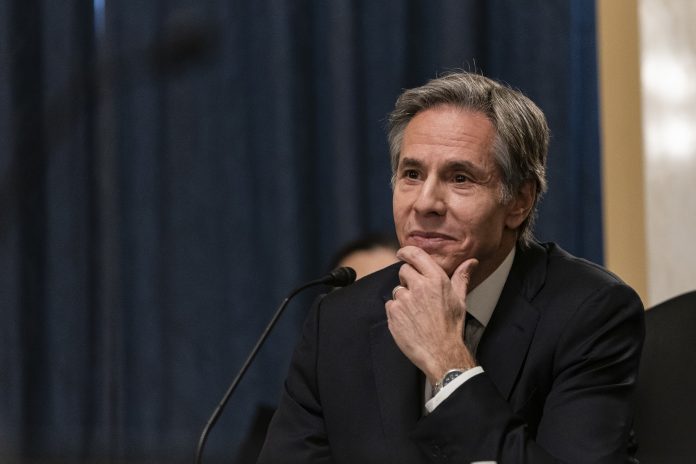 The United States, European Union, Canada, and Britain launched coordinated sanctions against Chinese officials over their involvement in persecuting the Uyghur minority in Xinjiang.

The sanctions are also part of the West’s attempt to display unity in condemning human rights violations perpetrated by the Chinese communist regime. The EU announced its sanctions first, followed by Washington.

A joint statement was made by U.S. Secretary of State Antony Blinken together with the foreign ministers of the Five Eyes intelligence alliance that includes the UK, US, Canada, New Zealand, and Australia. They accused the Chinese regime of using forced labor, suppressing religious freedoms, putting people in detainment camps, attempting to destroy Uyghur heritage, and conducting forced sterilizations.

The U.S. slapped sanctions on two Chinese officials – Chen Mingguo, Director of the Xinjiang Public Security Bureau, and Wang Junzheng, the Secretary of the Party Committee of the Xinjiang Production and Construction Corps. Andrea M. Gacki, the Treasury Department’s Director of the Office of Foreign Assets Control, said that Chinese authorities would continue to face the consequences as long as they commit atrocities in Xinjiang. Blinken called the campaign against Uyghurs “genocide” and stressed the need for a joint response to such atrocities.

“A united transatlantic response sends a strong signal to those who violate or abuse international human rights, and we will take further actions in coordination with like-minded partners… We will continue to stand with our allies around the world in calling for an immediate end to the PRC’s crimes and for justice for the many victims,” Blinken said in a statement.

EU sanctions are aimed at four Chinese officials. They involve banning them from traveling in the bloc, freezing their assets, and prohibiting citizens and companies from offering them financial assistance. The European Union also froze assets of Xinjiang Production and Construction Corps Public Security Bureau, which controls and runs the Xinjiang region’s economy.

Evidence of Beijing’s suppression of the Uyghur community growing

The bloc described the entity as a “state-owned economic and paramilitary organization.” Dominic Raab, the British Foreign Secretary, said that the measures were taken after mounting evidence of Beijing’s suppression of the Uyghur community.

Beijing slammed the move by Western nations. “The Chinese side urges the EU side to reflect on itself, face squarely the severity of its mistake and redress it… It must stop lecturing others on human rights and interfering in their internal affairs. It must end the hypocritical practice of double standards and stop going further down the wrong path. Otherwise, China will resolutely make further reactions,” the Chinese Foreign Ministry said in a statement.

China also announced that it would impose sanctions on ten EU citizens, including lawmakers, for spreading “lies and false information.” Five of them are members of the EU parliament, four are members of various security and human rights committees, and the final individual is U.S.-based German scholar Adrian Zenz who published several reports exposing the abuses committed against the people of Xinjiang and Tibet.

Also, a few EU entities will be part of the sanction. The foreign ministry stated that all sanctioned individuals and their family members would be prohibited from entering China, Macao, and Hong Kong.

Japan, however, refrained from committing to joint action against China over the Uyghurs, despite the fact that territorial tensions are simmering between the two nations. Chief Cabinet Secretary Katsunobu Kato expressed “grave concerns” about the situation developing in Xinjiang. However, he refused the possibility of Japan imposing sanctions, saying that the government cannot commit such action solely on the grounds of human rights.

Previous articleChinese State Tries to Influence Hollywood by Banning Oscars From Airing
Next article100,000 Undocumented Immigrants Caught in February, Department of Homeland Security Confirms Minors will be Allowed into the US