Heavy Troop Buildup in Washington, DC Ahead of Biden’s Inauguration 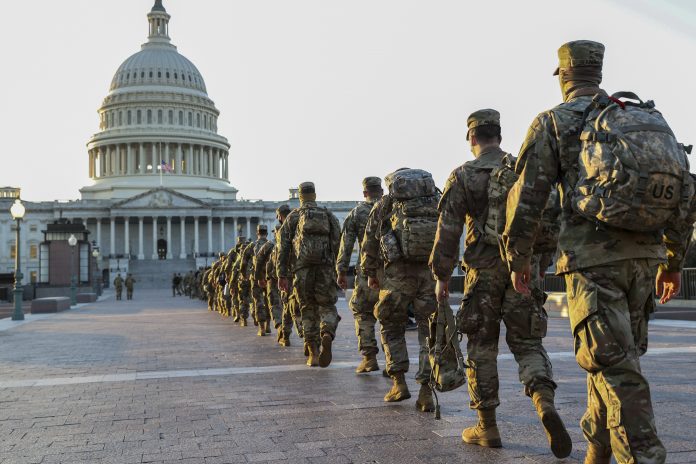 As Joe Biden’s inauguration day draws closer, Washington, D.C. is witnessing a rapid military buildup. The attack on the Capitol has alarmed security agencies who are leaving no stone unturned to ensure that nothing unexpected happens. The Pentagon is deploying 20,000 National Guard personnel on the streets; they will provide support to the U.S. Capitol Police force and the Metropolitan Police Department who have a combined might of 6,000 officers. This is more than five times the military manpower America presently has stationed in Iraq and Afghanistan.

Before Jan. 6 (the day of the attack), federal and city officials had sought to restrict military involvement on inauguration day. But the situation is different now. National Guardsmen protecting the Capitol have been allowed to carry lethal weapons by the Pentagon so that they can effectively respond to threats. Several roads are temporarily shut down, to be reopened after inauguration day. Some photos circulating online show National Guard troops resting by the Capitol building.

“This area of the Capitol has been designated a rest area for National Guard members when they are on duty but between shifts. To be clear, this [is] not where they are lodging when off-duty. Being present is the first step in ensuring the safety of our citizens and our nation’s Capitol. Our security personnel work in shifts and rest when they can as others stand watch… National Guard members are postured to meet the requirements of the supported civil authorities, up to and including protective equipment and being armed if necessary… The public’s safety is our top priority,” D.C. National Guard said in a statement. The guards have been armed as per a request made by federal authorities and approved by the U.S. Army Secretary.

President Trump has announced that he will not be attending Biden’s inauguration. Instead, Trump will leave Washington in the early morning on Jan. 20, just before Joe Biden will be sworn in. Though the send-off plans for the president have not been announced, reports suggest that a departure ceremony for Trump will be held at the Joint Base Andrews, complete with a red carpet and 21-gun salute. He is expected to remain in Florida to plan out his future political path. The swearing-in ceremony will be attended by past presidents Barack Obama, Bill Clinton, and George W Bush.

When it comes to funding the inauguration event, big tech and corporations are apparently lining up, willing to spend lavish amounts. Prominent donors include Google, Microsoft, Boeing, Comcast, Qualcomm, Verizon, Anthem Inc., and more. The exact number of donors is not known and is not required to be revealed until 90 days after the inauguration. Energy companies have been asked not to donate as Biden does not “accept contributions from fossil fuel companies.”

Meanwhile, the Mayor of Washington, Muriel Bowser, has advised people not to personally attend the presidential inauguration. “We are all focused on preparing for the upcoming presidential inauguration. Our goals right now are to encourage Americans to participate virtually and to protect the District of Columbia from a repeat of the violent insurrection experienced at the Capitol and its grounds on January the 6th,” she said at a press conference. Biden’s transition team has also urged people not to gather for the event. The administration plans to install an art display on the National Mall that will feature thousands of American flags together with the flags of all states and territories.