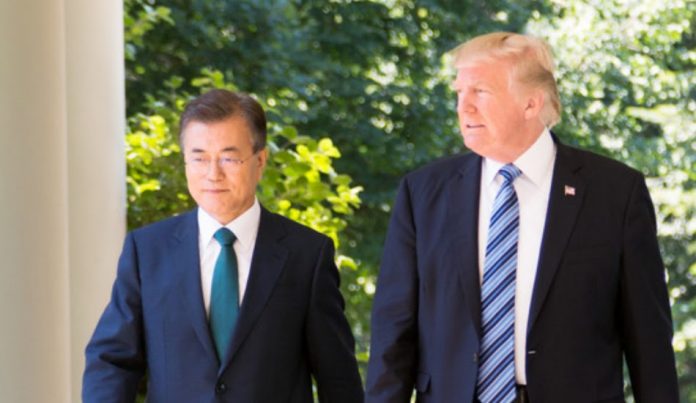 South Korean President Moon Jae-in asked President Biden to follow and improve on Trump’s diplomacy with regard to North Korea. Moon had lobbied hard to get Trump and the North Korean leader to participate in two summits. The first was in Singapore in 2018 that resulted in the two sides signing the “Singapore Declaration” in which the U.S. and North Korea agreed to take the necessary steps to diffuse tensions between both nations.

In the Hanoi summit the following year, Trump walked out as he felt North Korean negotiators were unwilling to ease their nuclear ambitions. Pyongyang insisted that “denuclearization” not be defined as ending North Korea’s nuclear program, but removing American presence in the Korean peninsula.

While speaking to reporters recently, Moon lamented that the Trump-Kim summits never produced any concrete, actionable result. The South Korean president expressed hope that Biden would continue talking to North Korea and possibly arrive at a peaceful agreement by expanding upon the Singapore Declaration.

“The declaration in Singapore under the Trump administration was a very important declaration for denuclearization and building peace in the Korean Peninsula… Of course, it’s very lamentable that the [content of the] declaration remains theoretical because of the failures to back it up with concrete agreements… But if we start over from the Singapore declaration and revive talks over concrete steps, it’s possible that diplomacy between North Korea and the United States and between South and North Korea would gain pace again,” Moon said in a statement.

Though the physical war between the two Koreas ended in 1953, a formal peace treaty was never signed between the two parties — South Korea and America on one side against North Korea and China. After the Nov. 3 presidential election, Moon was the first international leader to speak to Biden and expressed his desire to meet the president-elect as soon as he assumes office. He feels that his administration is on the “same wavelength” as the Biden administration in some aspects.

Despite Moon’s positive outlook, a favorable outcome from a Biden-Kim meeting, if it ever happens, does not seem possible in the near future. For one, both sides do not see each other in any positive manner. Biden has compared Kim to Adolf Hitler and criticized Trump for befriending “a thug.”

In November, North Korea called Biden a “rabid dog” who must be “beaten to death with a stick,” and noted that such a move might even be “beneficial for the U.S.” Given such hostilities, most security experts do not see any improvements happening in the relationship between the two sides.

During his campaign, Biden had already announced that he would not meet with Kim without any preconditions. In an interview with AFP, former CIA analyst Soo Kim noted that North Korea is peeved at the change in American leadership.

“The regime is aware the prospects of a top-level meeting with a U.S. leader are going to be slim now… We’re expecting a more principled, systematic approach to Pyongyang. This likely means less ad hoc interactions and some method to dealing with Kim,” Soo Kim said in the interview.

North Korea has conducted six nuclear tests in total, four of them during the Obama-Biden administration. The country conducted its sixth test in 2017, after which Trump put strict sanctions on North Korea. Though Pyongyang has conducted several missile tests after the failed Hanoi summit in 2019, it never carried out another nuclear test.

Previous articleHaines Is Confirmed as DNI, Says Communist China is Sometimes an Adversary
Next articleBiden Rolling Back Trump’s Efforts to Restrict Immigration

Neglected Lion Looks Like a King 3 Years After Rescue