Fauci ‘Knocked Out’ for 24 Hours, Suffered Common Side Effects of Moderna Vaccine Booster 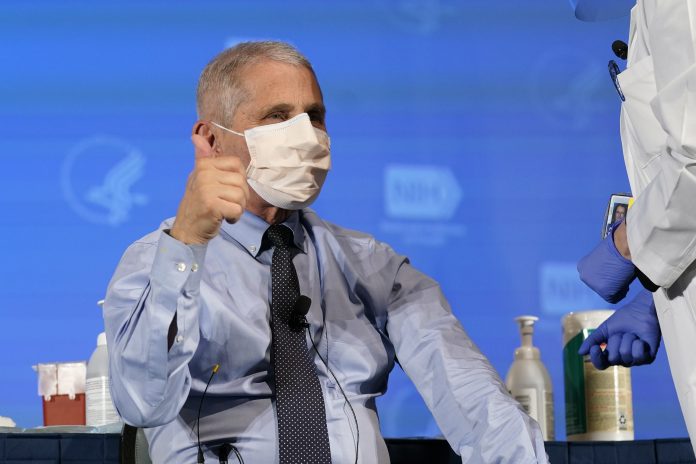 Anthony Fauci experienced 24 hours of fatigue as a result of side effects from taking the booster dose of the Moderna novel coronavirus (SARS-CoV-2) vaccine, according to comments he made during a White House press briefing on Jan. 22.

“I was hoping that I wouldn’t get too knocked out. I did for about 24 hours. Now I’m fine,” said Fauci, the Director of the National Institute of Allergies and Infectious Diseases. The 80-year-old doctor downplayed his symptoms, calling them a “little achy” and “chilly,” clarifying he wasn’t sick after receiving his second dose of the experimental mRNA (messenger RNA) vaccine on Jan. 19. Fauci received his first dose on Dec. 22 on television. The symptoms he described are among the most common and least severe reported.

According to Vaccines.News, during clinical trials, 55 percent of Moderna patients reported side effects with the first dose. The number increased to 80 percent with the booster.

The Daily Mail also reports that 70 percent of recipients of Moderna’s second dose experienced fatigue as Fauci did, while more than half shared the experience of aches and chills.

Considering the many uncertainties with the new vaccine, there is widespread hesitation to play the guinea pig. Recent polls found 35 percent of black adults and rural residents, 36 percent of adults aged 30 to 49, and 33 percent and 29 percent of essential workers and health care workers respectively were reluctant to take the vaccine. According to the Daily Mail, in Ohio, 60 percent of healthcare workers and 80 percent of workers in an Illinois veterans home refused to be vaccinated.

In December, VOX reported on a campaign to harness “influencers” to encourage the public to get the jab. “For the vaccine to have a large-scale impact, people don’t just need to be willing to be inoculated; they have to be enthusiastic enough to seek it out,”  said VOX.

On Jan. 5, #2 on Major League Baseball’s all-time home run leaderboard Hank Aaron received his first dose of Moderna’s vaccine. Aaron was quoted as saying he wanted “to send a message to Black Americans that the shots are safe.” He said: “I don’t have any qualms about it at all, you know. I feel quite proud of myself for doing something like this… It’s just a small thing that can help zillions of people in this country.”

Hank Aaron passed away on Jan. 22, 18 days after taking the first dose of Moderna’s vaccine. CNN reported according to a statement put out by the Atlanta Braves, that Aaron passed away peacefully in his sleep unrelated to his vaccination. He was 86.

According to CA’s Orange County Register (OCR), Tim Zook, an X-ray technologist at Santa Ana South Coast Global Medical Center, died after taking the second dose of Pfizer’s vaccine in early January. Zook had posted on Facebook: “Never been so excited to get a shot before… I am now fully vaccinated after receiving my 2nd Pfizer dose.” His account has since been deleted.

A few hours after receiving the booster, Zook had an upset stomach and trouble breathing. Concerned colleagues took him to the emergency room. By midnight, the 60-year-old was in a medically induced coma and had been ventilated. Two days and three “code blue” resuscitations later, Zook passed away.

“When someone gets symptoms 2 1/2 hours after a vaccine, that’s a reaction. What else could have happened? We would like the public to know what happened to Tim, so he didn’t die in vain. Severe reactions are rare. In reality, COVID is a much more deadly force than reactions from the potential vaccine itself,” said Tim’s wife, Rochelle. “The message is, be safe, take the vaccine — but the officials need to do more research. We need to know the cause. The vaccines need to be as safe as possible. Every life matters.”

On Jan. 17 in California, state health officials issued a pause on the distribution of more than 300,000 doses of the Moderna vaccine after several individuals experienced what was described as a “severe allergic reaction.” According to a Moderna press release, distribution of the lot was resumed on Jan. 20 after an in-depth review.

Novel coronavirus vaccines are a new, experimental vaccine type, developed in very short time frames. Conventional vaccines, which can undergo as much as 20 years of development and testing, inject a weakened or inert form of a virus into your body in order to stimulate immune cell production. Messenger RNA vaccines, on the other hand, attempt to stimulate immune cell production by injecting a genetic instruction into your body’s cells, causing them to synthesize the SARS-CoV-2 spike protein, the portion of a coronavirus that gives it both its unique “crown-like” shape and its ability to chemically bind with and enter human cells.

According to Moderna’s website, the mRNA used in their vaccine was created only 25 days after the Chinese Communist Party released the genetic sequencing of SARS-CoV-2 in January of 2020, months after the regime first detected the presence of a pandemic in Wuhan City.

The National Institute of Health began an internal phase I study of the vaccine on March 16. On Dec. 18, the Food and Drug Administration issued Emergency Use Authorization, prior to satisfying phase III testing requirements, for the Moderna vaccine, allowing it to be distributed in the United States to individuals over the age of 18.