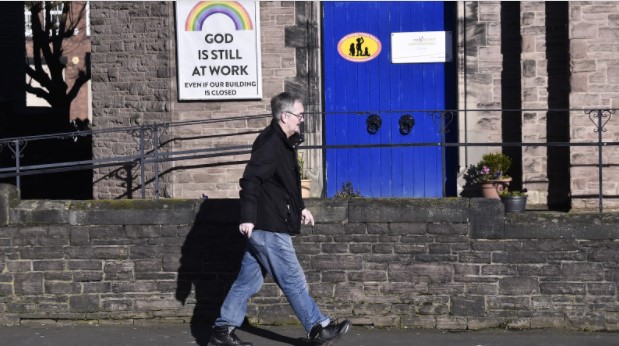 Dr. Michael Osterholm is the director of the Center for Infectious Disease Research and Policy at the University of Minnesota. He is also a member of President Biden’s COVID-19 Advisory Board. Recently, he gave an ominous warning about the new strains of the coronavirus and the upcoming American pandemic. “Expect the unexpected in the days ahead,” Osterholm proclaimed.

During a recent interview on NBC’s Meet the Press with host Chuck Todd, Osterholm was asked if we need to call an audible. Meaning, do we have to change from our original plans suddenly? To which he replied: “We do have to call an audible… The fact is that the surge that is likely to occur with this new variant from England is going to happen in the next 6 to 14 weeks, and if we see that happen, which my 45 years in the trenches tell us we will, we are going to see something like we have not seen yet in this country. In advance of this surge, we need to get as many one doses in as many people over 65 as we possibly can to reduce the serious illness and deaths that are going to occur over the weeks ahead.”

“Right now, you and I are sitting on this beach, where it’s 70 degrees, perfectly blue skies, gentle breeze, but I see that hurricane category 5 or higher 450 miles offshore, and you know, telling people to evacuate in that nice blue-sky day is going to be hard, but I can also tell you: that hurricane is coming. So, I think we have to understand that because of this surge, we do have to call an audible,” Osterholm warned ominously. “At 120,000 and 130,000 people hospitalized at one point, we saw our health care system literally on the edge of not being able to provide care. Imagine if we have what has happened in England, twice as many of those cases that is what we have to prepare for.”

Americans need action to prevent the spread of infections and disease

Osterholm sympathized with how “we are all” fatigued and angry with the pandemic, acknowledging how some frustrated people do not even believe it exists. He felt that even though Americans were in such a tired and worn-out state, they needed action in vaccinations, surveillance, and restrictions. Osterholm said: “We’re going to have to change quickly. As fast as we’re opening restaurants, we’re likely to be closing them in the near term.”

“We’re really good in this country at pumping the brakes after we wrapped the car around the tree,” Osterholm said in jest, showing his lack of faith in the government’s bureaucratic procedures. He then expressed optimism in the Biden administration’s plans for action in the future, saying: “The good news is that I actually see action being taken with this new administration unlike we’ve seen before,” stressing the importance of congress passing Biden’s covid relief spending initiative.

Biden’s covid relief project titled American Rescue Plan is a $1.9 trillion deal that Republicans are skeptical of and are trying to renegotiate.