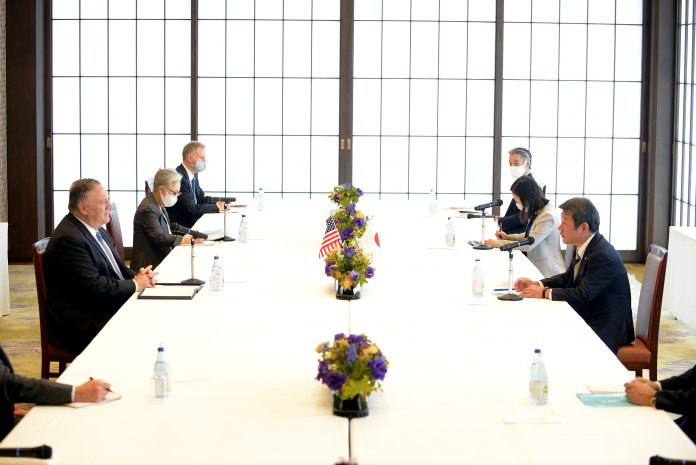 In December, Japanese diplomats provided the United States and Britain with intelligence showing the Chinese Communist Party’s (CCP) persecution of Uyghur Muslims in Xinjiang Province, said a source close to U.S.-Japan relations who wished to remain confidential, according to Kyodo News.

The source said that the U.S. increased pressure on China’s communist regime after receiving the intelligence.

In an August interview with Nikkei, former Defence Minister Taro Kono said Japan was eager to extend cooperation with the Five Eyes intelligence alliance: “These countries share the same values… Japan can get closer [to the alliance] even to the extent of it being called the ‘Six Eyes.’”

The article said that some members of the alliance, which includes the United States, Canada, Britain, Australia, and New Zealand, sought closer cooperation with Japan regarding concern for the CCP’s military expansion.

“Many countries believe that China is trying to change the status quo unilaterally with the threat of force in the background, including in the East and South China seas, along the China-India border and in Hong Kong,” said Kono, who was still Minister of Defence at the time of the interview.

“The consensus in the international community is that it should be made to pay a high price.”

Kono stated that a de-facto membership, rather than a formal one, would be sufficient for Japan with Five Eyes: “We will just bring our chair to their table and tell them to count us in.”

The U.S. think tank Center for Strategic and International Studies lauded the addition of Japan to Five Eyes, stating: “Though Japan enjoys high levels of cooperation with Five Eyes countries, the argument for Japan to formally become the ‘sixth eye’ has strengthened in the face of China’s growing military and cyber capabilities.”

A series of emails obtained by Rebel News in an Access for Information request provided by another Five Eyes member, the Canadian government, in early December revealed that Human Rights Watch reported a “smartphone app that authorities are using in Xinjiang to collect a ‘vast array of personal information’ (including location, religion, finances, biometric data, whether a person uses WhatsApp, and flags people as ‘suspicious’).”

The Canadian Embassy in Beijing “has seen this app in use at police checkpoints in Xinjiang,” said the Canadian government’s own emails.

“The United Front frequently intimidates members of academia, businesses, civil society groups, and Chinese diaspora communities, including members of ethnic and religious minority communities who speak out against horrific human rights abuses,” such as those in Xinjiang, Tibet, and the persecution of Falun Gong.

“These malign activities are intended to co-opt and coerce sub-national leaders, overseas Chinese communities, academia, and other civil society groups both in the United States and other countries in furtherance of the CCP’s authoritarian narratives and policy preferences.”

On Dec. 21, the State Department introduced additional visa restrictions on CCP officials who are believed to be responsible for or have participated in the persecution of spiritual practices, dissidents, journalists, or peaceful protestors, among others.

The additional restrictions notably target family members of Party officials involved in such crimes against humanity.

The CCP seems, in part, to have retaliated to this by visiting sanctions on a large list of U.S. officials from the Trump administration just after Biden’s inauguration. Foreign Policy magazine interpreted that this action may have been to gauge the response of the new administration. The Biden camp was swift to condemn Beijing’s move and check the CCP.

Biden’s National Security Council spokeswoman Emily Horne exposed Beijing’s motives in a statement to Reuters: “Imposing these sanctions on Inauguration Day is seemingly an attempt to play to partisan divides.” Horne also said: “Americans of both parties should criticize this unproductive and cynical move. President Biden looks forward to working with leaders in both parties to position America to out-compete China.”

Blinken on China, North Korea, and the Indo-Pacific: allied with Japan

Biden’s Secretary of State, Tony Blinken, told his Senate confirmation hearing that he was in agreement with Pompeo’s assessment of the CCP’s treatment of Uyghurs in Xinjiang as genocide.

Blinken said a starting place could be that “we should be looking at making sure that we are not importing products that are made with forced labor from Xinjiang … we need to make sure that we’re also not exporting technologies and tools that could be used to further their repression.”

According to Kyodo News, Japanese Foreign Minister Toshimitsu Motegi said on Jan. 24 that he plans to visit the United States to meet with his diplomatic counterpart, Secretary Blinken, perhaps in mid-February.

Kyodo speculates that hot topics will be “China’s military rise and North Korea’s nuclear development.” Motegi said that Blinken chose to call Japan right after his first call, to Canada, and told reporters: “This is proof that the Biden administration and Secretary of State Blinken value the importance of the Japan-U.S. alliance and commit to the Indo-Pacific region.”

Kalina Valqurey contributed to this report.