US Treasury Secretary to Meet With Financial Regulators About GameStop 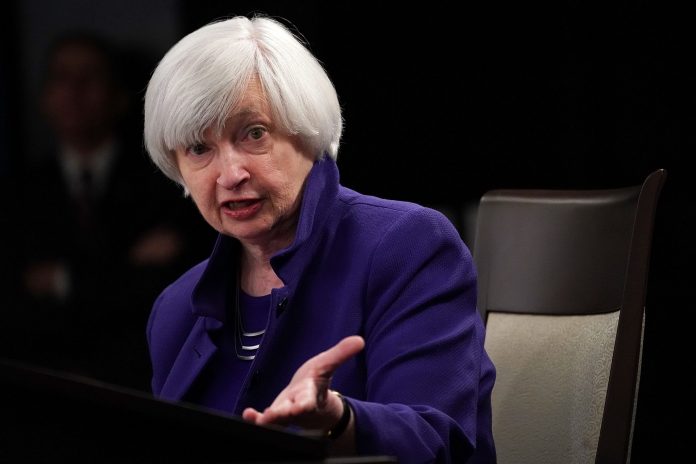 U.S. Treasury Secretary Janet Yellen will be meeting with financial regulators to discuss the high levels of volatility in the market regarding GameStop, a video game and merchandise retailer.

Frenzied trading of GameStop shares caused prices to soar by more than 400 percent recently before falling sharply. Experts also noticed such volatile activity on other stocks like Nokia and AMC. GameStop’s intense trading activity was fueled by the Reddit community Wall Street Bets. Redditors invested in GameStop with the aim of disrupting hedge funds like Citadel that bet on the company’s stock price to drop. Citadel had poured money into another hedge fund Melvin Capital to take a significant short position against GameStop.

When the stock price began to climb rapidly, those short positions turned into losses. Citadel reportedly gave a $2.75 billion lifeline to Melvin Capital to help it cover losses. GameStop share prices jumped from around $20 on Jan. 12 to a whopping $347 on Jan. 27. Today, Feb. 5, the stock is trading at $53.

The Securities and Exchange Commission (SEC) announced that it was closely monitoring the situation. It warned that extreme stock price volatility can cause rapid and severe losses to investors while also undermining confidence in the market.

Treasury Secretary Yellen has received hundreds of thousands of dollars in speaking fees from Wall Street, including $800,000 from Citadel. According to an ethics agreement, Yellen pledged not to be involved in any matters relating to Citadel without seeking appropriate authorization. She has received the necessary permission from ethics lawyers to convene the meeting.

“You are the Secretary of the Treasury, the duties of which require you to be involved in a broad array of matters focused on these sectors… Issues relating to these sectors could arise at any time without the opportunity for consultation with the ethics office. These circumstances make it difficult, if not impossible, for you to recuse from matters relating to these sectors and also argue in favor of prior authorization,” Treasury ethics official Brian Sonfield stated in a memo.

If authorities do take action against such activities by online communities, it would strengthen the claim that the government is colluding with Wall Street. Former Wall Street bond trader Chris Arnade said that the Reddit-driven trading activity of GameStop is something that hedge funds do all the time. The only difference is that the big boys use private meetings, conferences, and mainstream media to execute strategies while the “small guys” at Reddit use the power of Internet communities.

Many Redditors who have invested in GameStop have bitter memories from the 2008 Financial crisis triggered by the recklessness of Wall Street and other financial institutions. These traders had to watch big banks, investors, and funds get bailed without having to pay any legal penalties. But the small traders saw wealth evaporate, and some were even pushed into poverty.

“I wish the hedge funds would stop doing what they’re doing. But if it’s legal for the hedge funds, you can understand why people on Reddit would be outraged when people act like it’s not legal for them to do the same… It’s ultimately self-defeating because everything you do to try to stop these people, it’s only going to make them more cynical and more convinced that the system is rigged and, consequently, more prone to doing things that are just fun. Stuff that the elites view as disruptive. When the system is so blatantly unfair, people are going to get madder and madder,” Arnade told New York Magazine.