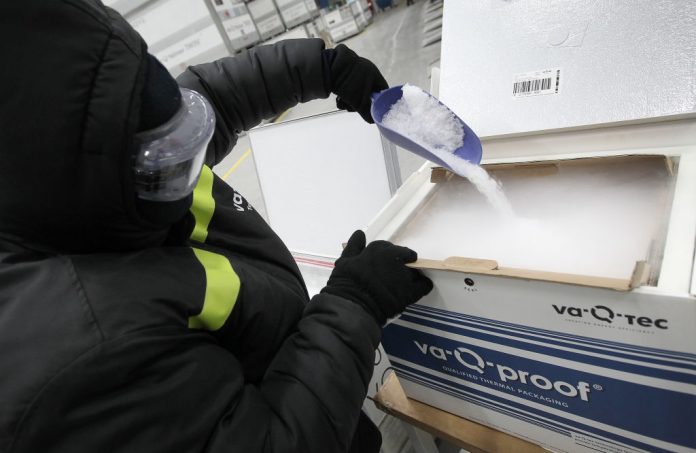 Japan’s drive to counter the SARS-CoV-2 novel coronavirus, which causes the pandemic disease the China-centric World Health Organization (WHO) coined as “Coronavirus Disease 2019,” or COVID-19, through vaccination is running into challenges. Dry ice manufacturers are struggling to meet the increased demand required to store large batches of the Pfizer-BioNTech vaccine, code named “Comirnaty,” “tozinameran,” or “BNT162b2,” which must be stored between -60 and -80 celsius.

One of the largest difficulties manufacturers are facing is securing the large amount of liquid carbon dioxide required to create an abundance of dry ice.

Japanese authorities approved the Pfizer vaccine for use on Sunday. Dry ice is required to store the vaccines when ultra-cold freezers are in short supply.

According to Kyodo News, Japan has agreements in place with Pfizer, Moderna, and AstraZeneca to supply enough vaccines to cover the island’s entire population of 126 million. Only the Pfizer version of the vaccine requires storage at such cold temperatures.

Pfizer’s fact sheet for their vaccine recommends storage in ultra-low temperature commercial freezers, which can preserve doses for up to six months. However, Pfizer’s thermal shipping boxes can serve as temporary storage containers. As long as they are refilled with dry ice every 5 days, they can hold vaccines for a maximum of 30 days.

The vaccine can be stored in common hospital refrigeration at temperatures between 2 and 8 degrees celsius for up to five days before use. Pfizer recommends a maximum of 35 days total storage time between these two methods. Once thawed and stored in normal refrigeration, doses cannot be frozen again.

So why do these new vaccines require such cold storage? The answer, according to Health.com, is because the vaccines are a new and experimental type of vaccine based on “Messenger RNA,” or mRNA for short. According to the U.S. Centers for Disease Control (CDC), “mRNA vaccines are a new type of vaccine to protect against infectious diseases. To trigger an immune response, many vaccines put a weakened or inactivated germ into our bodies. Not mRNA vaccines.”

“Instead, they teach our cells how to make a protein—or even just a piece of a protein—that triggers an immune response inside our bodies. That immune response, which produces antibodies, is what protects us from getting infected if the real virus enters our bodies.”

The mRNA in the new vaccines causes the body to synthesize the spike protein from the SARS-CoV-2 coronavirus, the portion of the virus which gives the pathogen both its distinct crown-like shape and allows it to bind to and enter human cells.

The CDC says the reason this works is because “the cell displays the protein piece on its surface. Our immune systems recognize that the protein doesn’t belong there and begin building an immune response and making antibodies, like what happens in natural infection against COVID-19,” says the CDC.”

These vaccines have not undergone extensive clinical trials, and the Pfizer-BioNTech vaccine was the first for which the Food and Drug Administration (FDA) issued an Emergency Use Authorization (EUA). The EUA allows the vaccine to be administered to people over the age of 18. Pfizer began development of their vaccine in January and was granted its historic EUA on Dec. 11, 2020, according to the New York Times vaccine tracker.

Lisa Morici, PhD, Associate Professor at the microbiology and immunology department at Tulane University School of Medicine told Health that these vaccines require cold storage because “There are also enzymes in the environment and all around us that break down mRNA.”

Health continues “Vaccine-makers also coat the mRNA in lipid nanoparticles. These tiny bubbles of fat help carry the mRNA to our cells and offer a degree of protection against enzymes that could destroy the fragile genetic material.” While the nanoparticle lipids alone aren’t enough to prevent enzymes from breaking down the mRNA, Morici says the mRNA-destroying enzymes “don’t work at really, really cold temperatures.”

By comparison, the Moderna mRNA vaccine only requires cold storage between -25 to -15 degrees celsius. Health explains the difference in storage requirements between Moderna and PfizerBioNTech’s vaccines: “The specific lipid nanoparticle formulas, which are kept secret by the drugmakers, determine just how cold the vaccines must be kept, hence the different storage requirements.”

According to industrial sourcing platform Thomas, the liquid carbon dioxide required to make dry ice is mostly harvested from the refining process of ammonia and petroleum, “Natural gas is burned to separate carbon and hydrogen atoms, and the hydrogen is then combined with nitrogen to make ammonia. The leftover carbon then can be mixed with oxygen to produce carbon dioxide.”

After making the carbon dioxide food grade and compressing the gas into a liquid, it becomes a solid through depressurization, “As the gas expands, it drops the temperature inside the tank, freezing a little less than half of the carbon dioxide into a solid before it can become a gas.”

“This 46% of the carbon dioxide becomes snow, condensing onto the upper plate of a press, which then compresses it for about five minutes under 60 tons of force to create a block. For dry ice pellets, the snow is extruded through dies in a pelletizer,” says Thomas.

Kyodo says that liquid carbon dioxide has been increasingly difficult to obtain in Japan because of the growing beverage market. The same substance that gives your soda its desirable fizziness is what produces the dry ice needed to preserve the experimental COVID-19 vaccine you may be planning on getting.

However, consumers aren’t the only cause of the shortage. Petroleum producers have also reduced the amount of carbon dioxide they produce as they have streamlined production methods.

Japanese companies have been working for many years to increase supplies of liquid carbon dioxide. A subsidiary of Japan’s Air Water Inc. has been launching new factories since 2013 to meet the rising demand for liquid carbon dioxide and dry ice, according to the report.

Showa Denko Gas Products said they had “received a request from the government to ensure a steady supply. This is an important matter, so we would like to respond to it as much as possible,” an official told Kyodo.

On Monday, the WHO announced its own EUA for the Pfizer-BioNTech mRNA vaccine, according to Associated Press.