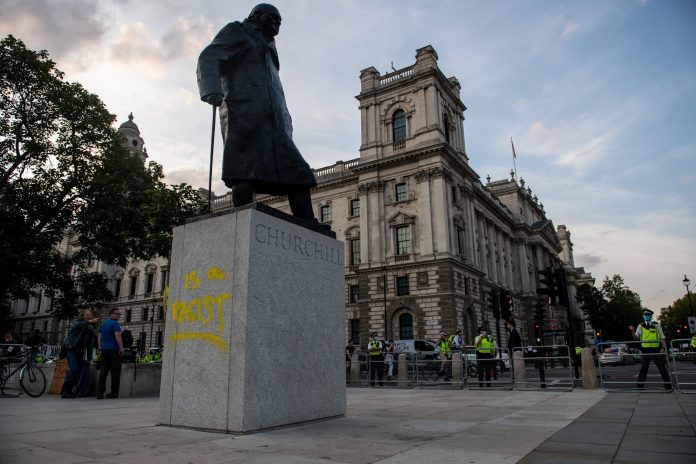 British Prime Minister Boris Johnson will soon be enacting legislation that will send people who vandalize or desecrate statues or memorials to prison for a period of up to ten years and/or fines of up to £2,500.

The legislation will grant protection for statues, war memorials, wreaths, and even flowers placed at gravestones. It is part of the government’s Police, Crime, Sentencing, and Courts bill.

People previously caught destroying statues were sent to prison for just three months if the damage was over £5,000. The legislation comes after a rise in British statues’ desecration during protests organized by Marxist groups, such as Black Lives Matter.

James Sunderland, a conservative MP and co-sponsor of the bill, said that the courts had not had proper power to respond to vandalism incidents adequately. Sunderland does not believe that the courts will start sentencing people to ten years in jail for destroying statues. But he thinks that the legislation will empower judges to deal with such cases effectively. Conservative MP Jonathan Gullis, the co-author of the bill, stated that destroying statues only deepen existing divisions.

“We have uncomfortable truths about how this country got its wealth, but it doesn’t justify tearing down statues… As a school teacher, every year, we went in-depth into the slave trade, looked at the Commonwealth and what it brought to the world, and how it achieved that. The kids are mindful of their history, but they are still proud of it. It’s part of this nation, and there is a chance to learn from it,” Gullis told The Telegraph.

Leftists targeted Cecil Rhodes’ statue for his views on race

Recently, Oxford University has been accused of trying to destroy Cecil Rhodes’ legacy. Leftists have previously targeted his statue for his views on race and the involvement with the British Empire. The student campaign ‘Rhodes Must Fall’ has been active for five years.

In July 2020, Cecil Rhodes’ statue was decapitated in Cape Town. The bronze bust in a city park had its head removed with an angle grinder, the South African National Parks said.

University academics have voted to rename the Rhodes Professor of Race Relations established in the fifties. Robert Poll of the ‘Save Our Statues’ campaign said that Rhodes’ attack has intensified in the same month that the university’s Wykeham Professorship was renamed after a Chinese state-funded company. Poll says it’s morally hypocritical considering the Chinese Communist Party is responsible for tens of millions of Chinese deaths.

Bristol’s city council approved a motion that called for slavery reparations to atone for the port city’s role in the inhumane trade. The council, dominated by the Labor Party, voted 47-12 to support the motion. It will ask the British Parliament to establish a commission to determine how to deliver the reparations.

It stated that the current racial injustice is the byproduct of the economic injustice perpetrated in the seventeenth century. Calvin Robinson, a senior fellow at the Policy Exchange think tank, said that Bristol had become the first UK city “to go entirely woke.”

“This is straight from the Critical Race Theory playbook, perpetuating a simplistic and divisive victim/aggressor narrative. It’s a misrepresentation both of history and of the people of Bristol. Nobody today is guilty. Nobody today is a victim,” he told Breitbart.