Home US New Gender-Neutral US Army Combat Fitness Test Under Fire for Being Oppressive...
US 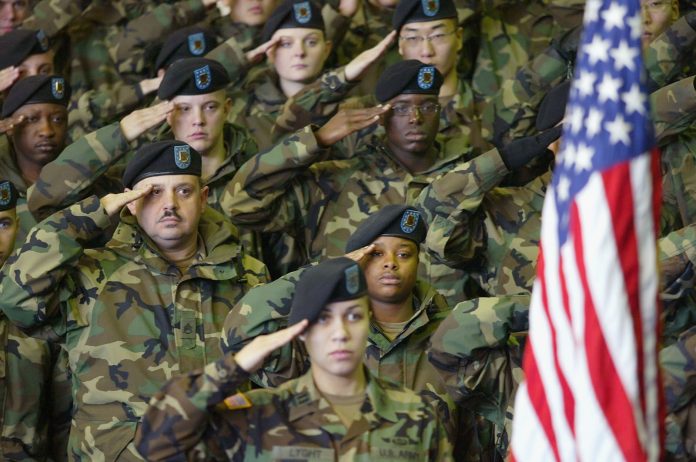 A new gender-neutral Army Combat Fitness Test (ACFT) that the U.S. Army began using in October 2020 is being ridiculed for being oppressive to women, causing Congress to balk at its implementation.

The test replaced the three-event Army Physical Fitness Test, which had been used since 1980, and had requirements based on gender. The new test was designed to gauge muscular strength and endurance, power, speed, agility, aerobic endurance, balance, flexibility, coordination, and reaction time.

The ACFT consists of strength deadlifts for a three rep max; standing power throw using a 10-pound ball; hand release push-up, where your hands and arms leave the ground at the apex of the push-up; a sprint/drag/carry, where you sprint for 25 meters five times, drag a 90-pound sled and carry two 40 pound kettlebells; a leg tuck, where you lift your knees and thighs toward your arms and elbows as many times as you can while hanging from a pull-up bar; and a two-mile run.

“The Army Combat Fitness Test will ignite a generational, cultural change in Army fitness and become a cornerstone of individual soldier combat readiness,” said Army Maj. Gen. Malcolm Frost. “It will reduce attrition, and it will reduce musculoskeletal injuries and actually save, in the long run, the Army a heck of a lot of money.”

The ACFT has come under criticism for creating what the Washington Post describes as a “dramatic gender gap.” An early Pentagon study found that 65 percent of women fail the ACFT, while only 10 percent of males fail. To pass the test, you need a score of at least 360 points out of a possible 600. The higher score you attain, the better your future job prospects, but average scores for women have been only 100 points or lower.

Congress has halted the new test’s implementation, claiming that it should not be used as a measure for promotion. The Army has put the test under an independent review, and the test will not count towards promotion until at least March 2022.

One possible solution being considered is using a percentile score based on gender so that evaluators would see which percentile you ranked within, rather than seeing the specific score attained.

The Washington Post said that “some women fear they won’t be able to pass even with additional training or will continue to score lower than men, potentially affecting their career prospects in an institution already struggling to shed historical gender and racial disparities.” But Capt. Kristen Griest, who became the U.S. Army’s first female infantry officer in 2016 after the Pentagon opened up combat roles for women, thinks otherwise.

Griest has embraced the gender-neutral based APFT because the old testing method weakened overall combat capabilities and reinforced the notion that women are not as capable as men.

“Under a gender-based system, women in combat arms have to fight every day to dispel the notion that their presence inherently weakens these previously all-male units. Lower female standards also reinforce the belief that women cannot perform the same job as men, therefore making it difficult for women to earn the trust and confidence of their teammates,” Griest wrote in a commentary to Modern War Institute at West Point. “To not require women to meet equal standards in combat arms will not only undermine their credibility, but also place those women, their teammates, and the mission at risk.”