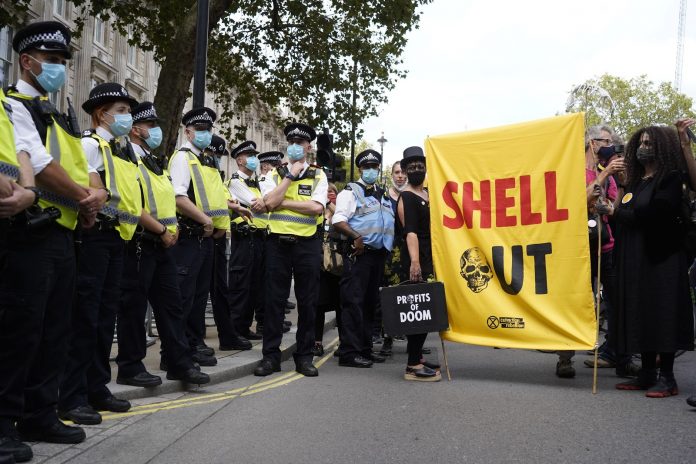 Some people say that the UK is moving towards a ‘police state’ after the parliament passed a bill that puts severe restrictions on the right to protest.

The Police, Crime, Sentencing, and Courts Bill 2021 is a response to the violent protests staged by the Marxist movement Black Lives Matter and Extinction Rebellion, eco-activists that caused massive damages to property and was a financial burden to the government for policing activities. Despite strong opposition, the bill was passed 359-263.

The bill allows police to set more conditions on the protests like start and end times and maximum noise levels. It will broaden the range of circumstances under which the police can impose conditions on the protests, including the Marxist movement Black Lives Matter. The bill will hold protestors to a higher standard of accountability. Previously, prosecutors had to prove that a protestor knowingly failed to comply with a condition, which was a tricky thing. The new bill only stipulates that the person knows or ought to have known the conditions imposed on the protest.

The British government insists that the new bill will not curb freedom of expression. The bill will only balance protesters’ rights with those of people who want to go about their daily lives unhindered. The bill is justified with the argument that the 1986 public order legislation is no longer applicable to protests today.

“The highly disruptive tactics used by some protesters cause a disproportionate impact on the surrounding communities and are a drain on public funds. For example, the Metropolitan Police Service’s cost for policing Extinction Rebellion’s 2019 “April Uprising” in London was over £16 million. These measures will improve the police’s ability to manage such protests, enabling them to dedicate their resources to keeping the public safe,” the government website states.

While the government presents the bill as something necessary to maintain order, many legal experts and human rights activists are concerned that some of the bill’s provisions will effectively make all protests criminal by nature.

For example, subsection (1) of section 59 specifies that protestors who are “intentionally or recklessly causing a public nuisance” can be jailed for a period of ten years. In an interview with Breitbart, Barrister Chris Daw QC says that the entire point of conducting a demonstration is to make an impact.

The law gives police authorization to intervene in a protest even if a single individual or business claims to be inconvenienced by it. Daw says giving the police the authority to determine whether a protest is too disruptive is “really scary.”

In the parliament debate, the bill was heavily criticized by the Labour Party MPs. Shadow justice minister David Lammy said that the early suffragettes who marched to the House of Commons demanding their right to vote broke the law to make their point.

He asked Justice Minister Robert Buckland whether those women who had shouted noisily for their voting rights should have been arrested.

“The loose and lazy way this legislation is drafted would make a dictator blush… Protests will be noisy, protests will disrupt, and no matter how offensive we may find the issue at their heart, the right to protest should be protected,” Gavin Robinson, an MP with Northern Ireland’s Democratic Unionist Party, said in a statement.