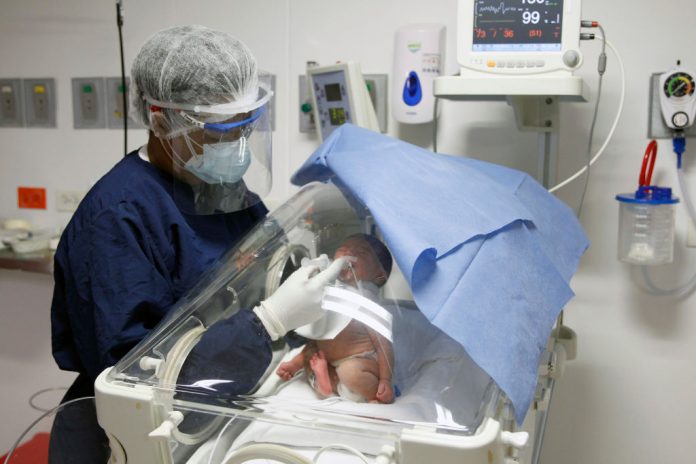 A hospital in Canada has triggered a controversy by separating a newborn infant from the parents against their wishes after all three had tested positive for coronavirus. The baby was put in isolation for ten days. The child was born on March 15 to Italian Sebastiano Sforza and his Brazilian wife Geovana Silva Rodrigues dos Santos.

Though the pregnancy was normal, the child, Olivia, was born prematurely at just 36 weeks. The mother never saw her child as she had to take a COVID-19 test immediately after being admitted to the hospital. Since the test came out positive, Olivia was taken away soon after birth.

“The baby, five hours after birth, was transferred to the CUSM [McGill University Health Centre] in Montreal, this facility supposedly is better equipped for performing the tests necessary for the baby’s condition… Geovana, having received a positive result from the Covid test, had to stay at home for ten days from March 15… I also took a test that came back positive, and so I was also confined to the house. Thus, unfortunately, our baby has had no contact with her parents, above all her mother, since she was born,” Sforza told LifeSiteNews.

The parents begged McGill to allow the mother to remain with her baby in isolation. However, their request was denied. The facility told them that there were no isolated rooms with toilet facilities available. This shocked Sforza since Canada is supposed to have better hospital facilities since it’s a developed nation.

The father plans on filing a lawsuit against the hospital for robbing him and his wife of sharing the first precious days with their baby together. He also accused the hospital of putting the baby’s life in danger by ignoring the baby’s need for mother’s milk and physical contact, for example. The parents were allowed to see their baby after the 10-day isolation period.

The problem of how to deal with mothers and infants during the pandemic has been a topic of heated debate. Some argue for separation and others warn against it. In the beginning, the American Academy of Pediatrics (AAP) had advised infants to be separated from their infected mothers for 14 days as a precautionary measure.

But in July, the AAP modified its stance. It stated that separation is not needed since there were no reports of infants dying during the initial birth hospitalization due to COVID-19.

In a recent statement, the World Health Organization (WHO) said that keeping mothers and infants together could save 125,000 lives worldwide during the COVID-19 pandemic. It emphasized the significance of ‘kangaroo mother care,’ which refers to the close contact between parents and their newborn baby.

Queen Dube, Director of Health at the Ministry of Health in Malawi, said that kangaroo mother care is critical for low-income nations to ensure maximum survival of babies.

“Much more attention is needed to ensure health practitioners and policymakers globally are aware of the need to keep mothers and babies together in these critical early days, especially for babies born too small or too soon… According to our analysis, these risks by far outweigh the small chance of a newborn baby getting severe disease from COVID-19,” she said in a statement.

Previous articleSARS-CoV-2 Infections May Have First Emerged in Hubei as Early as October 2019: Recent Study
Next article474 People Charged by DoJ For Coronavirus Fraud