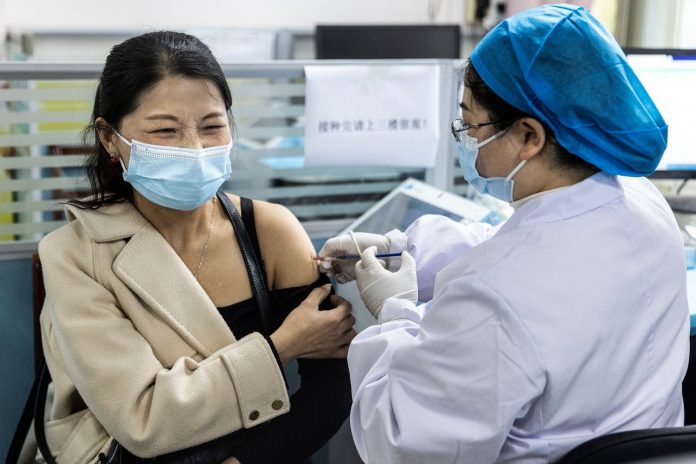 Hong Kong has registered two additional deaths after its citizens were inoculated with the China-made vaccine Coronovac.

So far, nine have died after taking the Chinese vaccines. Manufactured by Sinovac Biotech, Coronavac has one of the lowest efficacy rates at just 50.38 percent as per late-stage clinical data. Both deaths involved people who were classified as chronically ill.

One victim was an 80-year-old woman who had taken the shot on March 2 and died on March 19. The second victim, a 60-year-old man, had been vaccinated on March 11; he died on March 24. In addition to the nine deaths, nine more cases of facial paralysis have been reported, taking such incidents to 11.

The paralysis incidents include a case where an individual was given a shot of the BioNTech vaccine. Earlier, another person was reported dead after being given a BioNTech jab. Hong Kong Authorities have temporarily halted distributing the German-made vaccine “until further notice” after discovering that some of the batches had packaging defects. The vaccine is also suspended in Macau. The BioNTech vaccine in these countries is not distributed by Pfizer but by a Shanghai-based company called Fosum Pharma.

Hong Kong began vaccinating citizens with Coronavac starting Feb. 26. By March 15, 166,000 Hongkongers had been inoculated. Beijing has not released much data on the vaccine’s adverse reactions, raising questions about its safety.

Cheung Wai Lit, a doctor from Hong Kong, said that some of his Coronavac-vaccinated patients had experienced a rise in blood pressure, increased body temperature, and irregular heartbeats. He believes these are not coincidences.

An 80-year-old Hong Konger told The Epoch Times that local authorities are using the Chinese vaccine solely to gain the favor of Beijing. He said he would never take a vaccine made in China.

Xiaoxu Lin, a former microbiologist in the U.S. Army, stated that it is critical to record the number of people who have had adverse reactions or died after receiving the vaccine. However, he doesn’t believe Beijing will inform the public with such data and instead adopt a “cover-up attitude.”

Communist China is now making visitors take a shot of the China-made vaccine before entry. Chinese embassies of at least 23 nations have issued these new visa policies, including the UK and the United States. The UK and U.S. have not domestically approved the use of Chinese vaccines. All travelers will also be quarantined for a period of two to three weeks.

Nicholas Thomas, an associate professor in health security at the City University of Hong Kong, said that the new visitor vaccine rule is a “power move” to force people to be inoculated with China-made vaccines. He hopes that other nations do not follow communist China’s example and will instead treat all vaccinated people equally regardless of which vaccine they have received. He wants countries to stop engaging in a vaccine race.

“The viruses… just want to replicate and mutate… I think unless we do take a truly global approach to vaccines, and recognize that we have to simply do the best on a global level, then we’re going to be looking at latent pools of Covid cropping up again in the future and possibly like the second wave of the Spanish influenza, mutating in such a way that makes it worse than before,” Thomas told CNN.

Honeywell, a major American aerospace and engineering firm, has been fined 13 million dollars by the U.S. Department of State for transferring critical military...
Read more
China