The CCP’s Bizarre Approach to Reporting 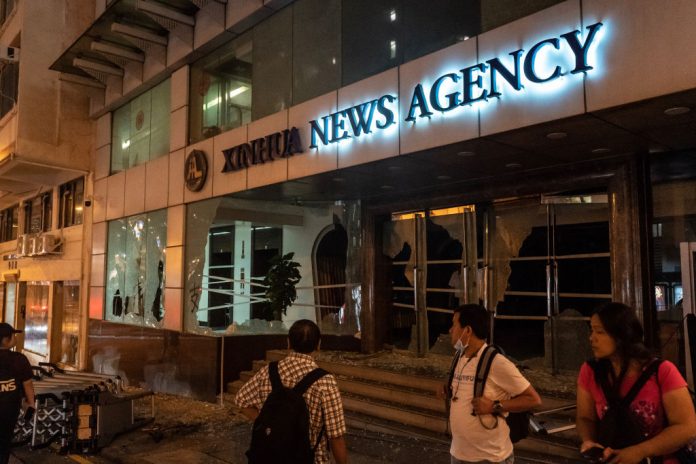 While the global community widely recognizes suppression of freedom of speech and censorship in China, the Chinese Communist Party (CCP)’s use of media as a propaganda machine is equally pervasive. In some cases, even Chinese citizens have called out the regime for allegedly exaggerating or fabricating news stories.

In 2017, Chinese state-run media CCTV produced a video documentary entitled “In Pursuit of General Secretary Xi Jinping’s Beginnings.” It tells the story of Xi Jinping’s life as a young man in Liangjiahe village. In the documentary, Xi Jinping describes himself as having done all kinds of hard labor in the past, even once “carrying 100 kilograms of wheat on his shoulder while walking five kilometers on a mountain road without ever switching shoulders.”

This story compelled one of Taiwan’s fitness fanatics to gather his friends in 2020 to try to complete the incredible task that Xi had supposedly performed. The trio planned to walk around Taiwan’s Qingtiangang Trail, which happened to be 5 kilometers long, in an attempt to replicate Xi’s miraculous feat via a relay.

Each of the men started to stagger backward and sway after just putting the yoke on his shoulders. Despite being muscular and fit, they struggled. The wooden yoke was bent out of shape by around 200 meters and eventually broke. The team managed to walk about 550 meters before giving up and finally said, “This is probably the weight that only leaders can bear.”

CCTV produced a documentary film called “Amazing China” in 2018, showcasing the so-called achievements of the Chinese Communist Party (CCP). The film was released in China on March 2, delivering its self congratulatory propagation to the masses.

The 90-minute promotional film highlights Xi Jinping’s supposedly impeccable leadership and is effectively a slideshow full of praise and compliments. The underlying content and philosophy are based on a set of policies and ideas derived from Xi’s writings and speeches, called “Xi Jinping’s Thoughts on Socialism with Chinese Characteristics for a New Era.”

According to a lengthy report published by the Associated Press (AP), the documentary illustrates how the Chinese shoe-making company, Huajian Group, exploited Ethiopian workers. Because the Huajian Group employed thousands of people in Ethiopia, the film portrays Huajian as a benefactor that brings prosperity to other countries.

However, Huajian workers in Ethiopia told AP that they are forced to work without safety equipment, for wages so low that they can barely make ends meet, and are forbidden to form a trade union.

Despite its lack of substance, the film broke box office records for Chinese documentaries. According to ticketing platform Maoyan.com, the film raked in 456 million Chinese yuan ($72 million) five weeks after being released, even surpassing the latest episode of Star Wars. AP explains that state-owned enterprises or government agencies distributed the tickets as part of a “party building” effort, so many viewers who saw the film did not buy their tickets.

Officials have banned negative online reviews. On the Chinese film site Douban, the rating and review feature for “Amazing China” has been turned off for users, leaving only “media ratings” and official media posts that praise the film. In contrast, on the U.S. film database IMDb, the film has a rating of just 1.4 out of 10.

During the coronavirus outbreak, the CCP’s Political and Legal Affairs Commission was tasked with winning over people’s hearts and creating a positive public image. Hundreds of reporters were dispatched to Wuhan and other places to create touching stories about front-line healthcare workers and citizens’ selflessness. Below are some curious stories of sacrifice that the CCP deemed worthy of reporting as news.

Shanxi Huashang Daily reported that when a female nurse went into a restricted area to care for COVID-19 (Coronavirus Disease 2019) patients, her “newborn” twins asked their father, “What’s mommy doing?” The father was reportedly in a vegetative state and has been paralyzed and bedridden since 2014. When he learned that his loving wife was in the front lines of medical care, he would smile every time he heard her name “as if he knew his wife was doing something great.”

The Xinjing News reported that a dozen female workers at a Gansu Province hospital shaved their heads before heading to the center of the pandemic in Wuhan. Some of them shed tears while chopping off their hair, casting doubt on whether they were acting of their own free will. People asked why the men did not have to shave their heads as well, and the hospital stated that the women voluntarily shaved their heads.

Another report of a patient was from one of Wuhan’s field hospitals during the coronavirus outbreak. She told a TV reporter that she loved the hospital so much that she did not want to leave.

These news stories were so difficult for Chinese citizens to believe that many were edited or deleted because of the onslaught of readers’ negative reviews. The media outlets tried to apologize, but the public still ridiculed them. Dai Jian-ye, a professor at Central China Normal University in Wuhan, wrote an opinion article stating that “none” of the CCP media reports could be read and that some of them were “insulting to people’s intelligence.”

It is common practice for CCP officials to show their concern for the people’s plight by offering their condolences with daily necessities or food items to the “needy” on New Year’s Eve. The media covers these events with great fanfare, which has led to some unwanted exposure.

On February 3, a street office in Qingdao in Shandong province published an article about a local official visiting a family in need and delivering gifts. The poor household photo showed extensive, bright decorations with high-grade wine in the cabinets and a suspected brand-name TV, all of which sparked controversy.

Some netizens posted that the so-called poor households visited by the leaders have deep connections with officials. Like an orchestrated play, officials pre-planned visits to convince viewers of their affinity with commoners, and media stations are complicit in the staged visits.

If officials are indeed hiding their underground connections with these households, then the unorthodox way the CCP reports “news” has uprooted its media’s sacred role of delivering truth to the public. As evidenced by the severe public backlash, the current pandemic should not have been exploited as a means to glorify communism. Instead, the improper use of propaganda to influence popular opinion has jeopardized the state-run media’s credibility.

‘People Choose To Be Brainwashed’ Says North Korean Defector on Her Experience at a U.S. Ivy League