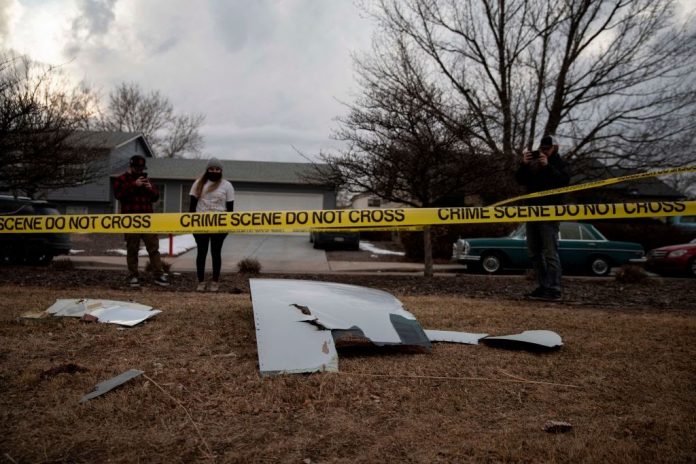 A major airline disaster was averted when United Airlines Flight 328 made an emergency landing at the Denver International Airport. Its right engine exploded shortly after take-off. With ten crew members and 231 passengers on board, the plane landed on the ground with no reported injuries.

When a loud boom was heard after the plane took off, the passengers in the plane looked out of their windows to see an engine on fire and pieces falling off. Terrified, many clung to their loved ones and began to pray.

Travis Loock, one of the passengers on the flight, reveals that the loud boom occurred about 20 minutes after takeoff. He saw fear on everyone’s face. But he said that people maintained their composure even in the face of such a disaster.

“There was a big boom and the kind of sound you don’t want to hear when you’re on the airplane… And I instantly put my shade up, and I was pretty frightened to see that the engine on my side was missing… We were just glad we weren’t over the ocean because that’s where we were heading… A lot of people couldn’t see the engine on that side, right, so I was a little more freaked out because I could see it, and I knew that was not right,” Loock told CNN.

People on the ground along the plane’s flight path were also horrified to see debris falling from the sky. Fortunately, the debris caused no injuries. Pieces of the plane landed as far as Broomfield, 30 miles west of the Denver International Airport.

Images were circulating online showed airplane parts strewn in front of homes and on a soccer field. The National Transportation Safety Board (NTSB) has taken the debris and opened an investigation into the cause of the engine explosion. Police have asked locals not to move the debris so that NTSB officials can investigate the scene.

An NTSB initial investigation showed that much of the damage to the plane was limited to the Number 2 engine. The explosion damaged the Pratt & Whitney PW4077 engine’s two fan blades. The inlet and cowling had separated from the engine. The flight recorder has been sent to the NTSB laboratory in Washington, where experts will download and analyze the data.

Federal aviation regulators have ordered United Airlines to inspect all Boeing 777 planes equipped with the same engine type. United Master Executive Council of the Air Line Pilots Association praised the crew aboard Flight 328 for doing a great job ensuring that no one was injured.

A report released by aviation consulting firm To70 last month showed that the number of people killed in commercial airplane crashes rose in 2020 despite low aviation traffic due to the pandemic. More than half the deaths occurred in a single accident in Jan. 2020 when Iran shot down a Ukrainian plane. The second deadliest accident occurred in May during a Pakistani airliner crash.