Socialist Takeover of All 5 Nevada Democratic Party Seats Will ‘Push the Party to the Left’: Expert 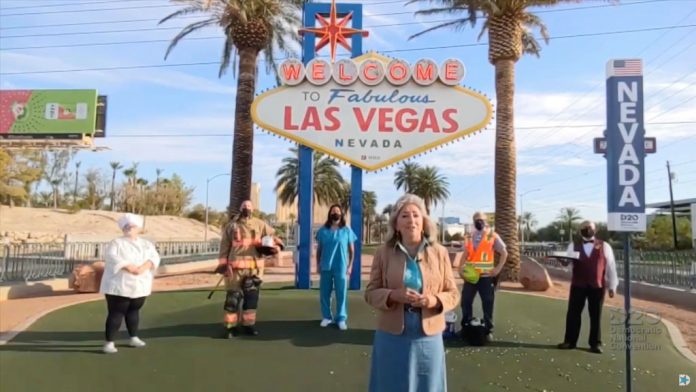 All Nevada Democratic Party staff members have quit after every seat was lost in a recent internal election to Democratic Socialists of America candidates, according to a report by The Intercept.

The article describes the newly elected slate as a “coalition of progressive candidates backed by the local chapter of the Democratic Socialists of America,” who swept all five posts in the Party. When Judith Whitmer and her socialist coalition won the Nevada Democratic Party election on March 6, they received an email from former Executive Director, Alana Mounce, announcing the resignation of herself and each staff member and consultant of the Nevada Democratic Party, effective immediately.

Whitmer told The Intercept that her defeated rivals were simply bitter at their loss, “What they just didn’t expect is that we got better and better at organizing and out-organizing them at every turn.”

The Intercept says the DSA machine started with Democratic Socialist of America member Bernie Sanders’s 2016 run at the Democrat Party candidacy for the President of the United States, “When the Sanders campaign ended, the organizers behind it were ready to take their project to the next level. Progressive groups like the Clark County Left Caucus, of which Whitmer was chair, and local DSA chapters had been organizing for Sanders across Nevada since 2016.”

“The Left Caucus and DSA organizers ran a slate of candidates for state party leadership under the name ‘The NV Dems Progressive Slate.’ All but one candidate on the slate was a dues-paying member of a local DSA chapter,” said the article.

Donna West, former Chair of the Clark County Democrats and Whitmer’s predecessor does not speak highly of Whitmer, saying she “Does not listen to others’ opinions and really take those on board,” and “I found that working with [Whitmer] could be really difficult, that she doesn’t really collaborate well, and doesn’t work to build consensus.”

In a March 9 CNN article, Jon Ralston, founder of the Nevada Independent, who CNN calls “the single best political reporter in the state,” described the election as an “election for state chairman, which is conducted by the few hundred people on what is known as the central committee. These are hardcore activists and party faithful.”

Ralston said Whitmer and the DSA’s victory over the establishment was anything but surprising to those who understand the current situation of internal Democrat Party politics, “The establishment candidates rarely win these battles in either party. The activists feel beholden to no one and often are hostile to their own elected officials. It sounds nuts, but go to a central committee sometime and experience the yearlong celebration of Festivus.”

Ralston also noted the support for Sanders in Nevada was substantially greater than it was for President Joe Biden, “there was not the same enthusiasm for Joe Biden. Sanders crushed Biden 2-to-1 in the caucus here and that helped the Bernie folks populate the central committee.”

When it came to what implications the events in Nevada had for the Democrat Party nationally, Ralston said “There is no question in the world of [Alexandria Ocasio-Cortez] and Bernie [Sanders] that the progressive wing is feeling its oats and demanding more from the party leaders. They want ‘Medicare for All,’ a $15 minimum wage, etc.”

“These folks who took over — and this goes for some of them nationally, too — want to push the party to the left and, as is often the case, enforce purity tests,” said Ralston.

“They have always, though idealism and/or arrogance, believed they believe what most people believe, which is dissonant with what results have often shown.”