For many religious groups, prayer is direct communication between man and God. (Image: via pixabay / CC0 1.0)

On the Friday afternoon of April 10, U.S. President Donald Trump tweeted that on Easter Sunday, there would be millions of Christians celebrating Easter and the resurrection of Christ: “At this sacred moment, let us pray to God to help heal infected patients, soothe people’s broken hearts, and bless heroes who fight against viruses.”

In response to the United States being hit by the plague, the first lady of the United States, Melania Trump, also expressed that on behalf of this grateful country, she would like to thank all the medical staff and rescuers on the front line and pray to God for people together.

A group of nurses at Vanderbilt University Medical Center shared a picture of them praying on the roof. Nurse Angela Gleaves wrote on Facebook: “It feels good to do this with these outstanding colleagues. We are immersed in prayer and can feel God by our side.” 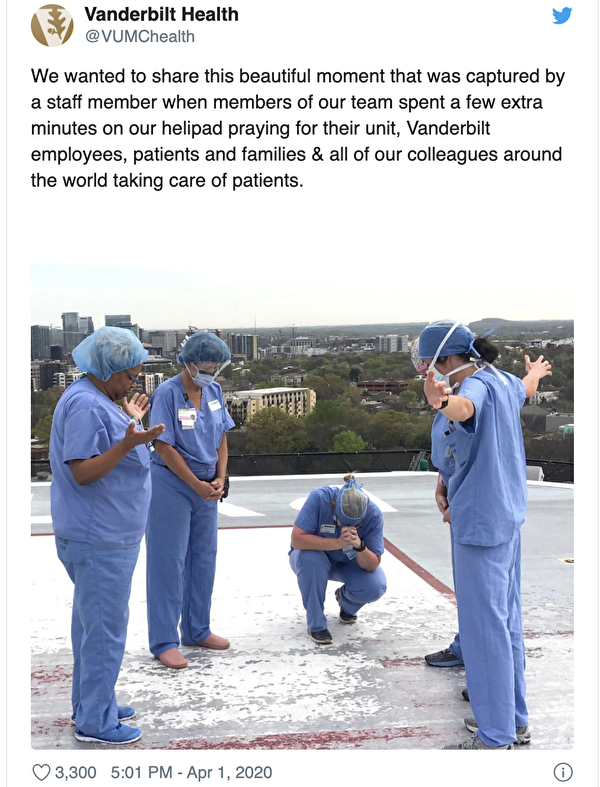 Medical staff at Vanderbilt University Medical Center pray to God on the roof.

Trump declared on March 13 that the United States entered a national emergency in response to the epidemic, and on the afternoon of the same day proclaimed March 15 as a U.S. National Day of Prayer. On Twitter, most responded positively: “I am glad that we have a vice-president who prays”; “We are very pleased that our leaders know the importance of seeking God, and may God bless and guide them, and give them the wisdom to manage and protect the country.”

Minghui.com commented that for many religious groups, prayer is the direct communication between man and God. Prayer, on the one hand, expresses your faith, praise, and gratitude to God; on the other hand, it allows you to confess your sins, express your determination to change, and ask for forgiveness. Prayer is not verbal rhetoric or dealing with the symptoms but not the root cause.  It is a manifestation of serious and sacred righteousness because only prayers with the right mind and heart can be blessed and redeemed by God. The Chinese Communist Party (CCP) virus cannot knock down a life with a firm belief in God.

In Western society, some people realize that the CCP virus that caused the outbreak of the pandemic is not accidental — human depravity and lost nature are the main reasons. Only by sincerely asking the Creator for help can you get the courage and wisdom to survive the disaster. The CCP virus continues to wreak havoc. Recently, parents with children at many famous schools in Hong Kong received a message on their mobile phones calling for a prayer against the epidemic in the name of Shen Zuyao, a former president of the Chinese University of Hong Kong and a famous doctor.

In Western society, some people realize that the CCP virus that caused the outbreak of the pandemic is not accidental — human depravity and lost nature are the main reasons. (Image: pixabay / CC0 1.0)

During the outbreak of SARS in 2003, Shen Zuyao was named an Asian hero by Time Magazine for his outstanding work performance. In an interview, Shen Zuyao recalled how he led the team and defeated the SARS epidemic. “At the time of SARS, we couldn’t control the disease at all. We tried all the drugs and couldn’t see a patient getting better, so I came up with praying for patients. I prayed, God, please don’t let our ignorance and incompetence lose any lives.” After saying this, everyone in the room cried. Because everyone felt that they had reached limits of their abilities.

When disasters endangered the country, emperors of all dynasties in China bathed, fasted, worshiped, and sincerely confessed their mistakes and sins to gods with a sacrificial ceremony, and even pronounced their “crime of self” to the public. This is much the same as Westerners sincerely praying, confessing their mistakes to God, and truly repenting.

Nobel literature laureate Mario Vargas Llosa, a Peruvian writer and poet, in the article entitled Return to the Middle Ages? also said that human fear will not disappear, because science cannot appease people’s sense of fear. He said that in the Middle Ages, the ancients locked themselves behind towering walls and protected themselves with moats and drawbridges, but they could not stop the plague, because the plague is a masterpiece of the devil and punishment from God. Mario Vargas Llosa believes that in the face of a plague, people have no choice but to pray and confess their sins.

A Japanese Ad Shows What Is Possible When Music Meets Science