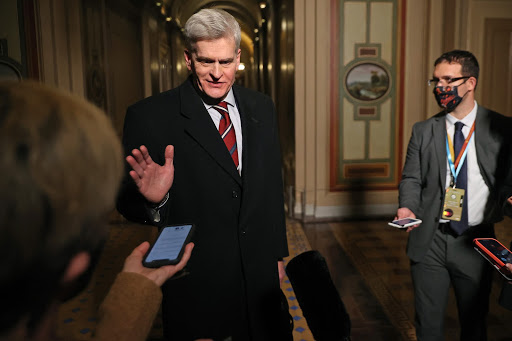 Day one of the historic second Trump impeachment trial began in the United States Senate on Tuesday. The first day revolved around a procedural motion to determine whether the Senate had jurisdiction to try the President under the Constitution. Article II Section IV specifically states: “The President, Vice President and all civil officers of the United States, shall be removed from office on impeachment for, and conviction of, treason, bribery, or other high crimes and misdemeanors,” but President Trump is no longer in office.

House Managers Rep. Jamie Raskin (D-MD), Rep. Joe Neguse (D-CO), and Rep. David Cicilline (D-RI) presented the charges against Trump. They argued that if a president could not be impeached in his final month of office, this so-called “January Exception” would set a dangerous precedent allowing an outgoing president to go wild in his final month in office with impunity.

“What will the January Exception mean to future generations if you grant it? I’ll show you,” remarked Raskin as he proceeded to play a 15-minute Youtube-esque mashup of Trump’s speech on Jan. 6, combined with clips of a crowd being agitated by provocateurs and the ensuing break-in of the Capitol Building.

Many of the scenes shown in the Democrats’ video compilation were clear and obvious cases of a crowd being provoked by agents provocateurs, using tactics like calling for shields to be transferred up a chain of insurgents to the front of the line. Insurrection specialist Michael Yon, in an interview with Crossroads on Jan. 10, referred to these maneuvers as “Hong Kong Tactics” recently utilized by Antifa.

Many clips were watermarked with “Jayden X,” an alias for far-left Black Lives Matter agitator John Sullivan, who claimed he was at the Capitol as a journalist. Sullivan was later charged.

Democrats used commentary in mainstream media articles and also opinions from legal experts and scholars alike, to support their position that an outgoing President could be tried. The material was backed up with a graphic displayed during the broadcast, providing for both a visual and audio experience.

Rep. Cicilline argued that although the Articles of Impeachment were rushed through the House of Representatives in a single session with no witnesses and no evidence provided, it was a non-issue because the House serves as a “grand jury” while the Senate serves as a courtroom.

As for why Supreme Court Chief Justice John Roberts is not presiding over the trial, Cicilline said: “Let me state this very plainly: It does not matter. It is not significant,” because in Article I Section III of the Constitution the verbiage plainly states “When the President of the United States is tried, the Chief Justice shall preside.” With Joe Biden as the current President of the United States, the President Pro Tempore of the Senate, Sen. Patrick Leahy (D-VT), as the oldest living member of the Senate, is suitable to preside over the trial.

President Trump’s lead counsel and former Pennsylvania Attorney General Bruce Castor, unlike his house managers, relied on a more than 45-minute monologue that presented no visual evidence, while heavily utilizing personal anecdotes and general legal philosophy. Throughout much of Castor’s arguments, he was both uncompelling and hard to follow, on the coattails of the Democrats’ well presented audio-visual presentation.

However, Castor did make a very strong point to close his address. He succinctly tackled Rep. Raskin’s notion about the “January Exception” that would form if an outgoing president could not be impeached: “If my colleagues on this side of the chamber actually think President Trump committed a criminal offense — and let’s be clear: a high crime is a felony and a misdemeanor is a misdemeanor, the words haven’t changed that much over time. After he’s out of office, you go and arrest him.

“So there is no ‘opportunity’ where the President of the United States can run rampant in January at the end of his term and just go away scot-free. The Department of Justice does know what to do with such people. And so far, I haven’t seen any activity in that direction, and not only that, the people who stormed this building and breached it were not accused of conspiring with the President.”

Schoen calls out Pelosi’s strategic use of time

David Schoen, former lawyer for Jeffrey Epstein before the convicted pedophile died in prison awaiting trial, gave a much more coherent set of oral arguments revolving primarily around the plain text of the Constitution as written. Schoen most notably posited that Nancy Pelosi delayed delivering the Articles of Impeachment to the Senate, in order to ensure that the trial would occur when Trump was out of office. Doing this meant that Sen. Leahy would preside over the trial instead of Chief Justice Roberts, creating a conflict of interest: not only would Leahy have a vote during the impeachment trial, but Democrats would subsequently preside over all procedural and evidentiary matters.

Schoen was emphatic to make clear that he did not doubt Sen. Leahy’s integrity, and was not making any accusations, but was simply presenting his theory on why Pelosi rushed the Articles through the House and then delayed presenting them to the Senate.

Schoen powerfully contrasted a physical copy of the Constitution, citings its “insistence on due process” to every citizen: “We all well know that there are many systems in other countries around the world who do not offer any semblance of the safeguards our Constitutional concept of due process provides. Some of them have chosen their own handbooks which direct their citizens’ conduct on penalty of death.”

“This is one of them,” Schoen said as he pulled out a copy of what appeared to be Mao Zedong’s “Little Red Book.”

In the end, the four and a half hour proceeding was all for naught, as the Senate voted to proceed with impeachment 56-44. Republicans Lisa Murkowski (Alaska), Susan Collins (Maine),  Ben Sasse (Nebraska), Mitt Romney (Utah), Bill Cassidy (Louisiana), and Pat Toomey (Pennsylvania) crossed the floor to vote for the trial to proceed.

Bill Cassidy was the only new Republican Senator to vote against Trump after Sen. Rand Paul’s (R-KY) failed point of order to declare the impeachment unconstitutional on Jan. 26.

Previous articleVisit This Traditional Korean Tea House With a Conscience
Next articleThe ‘Terrain’ of Disease: Limitations of Germ Theory