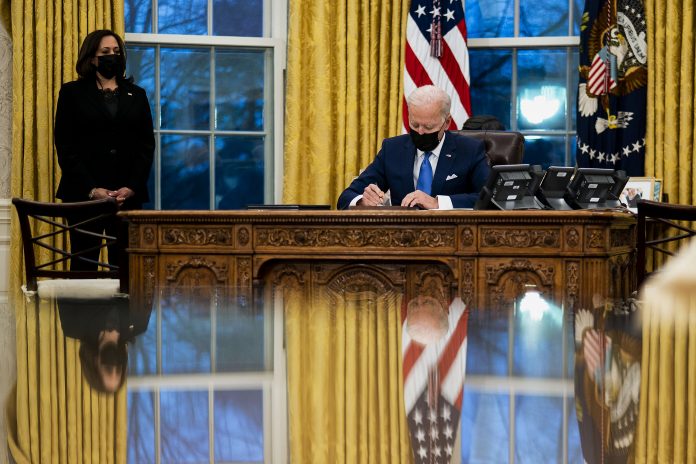 The U.S. Citizenship Act of 2021, will pave an 8-year path to amnesty for an estimated 11 to 22 million aliens currently residing in America. Biden has promised to modernize what he described as a broken immigration system made worse by the policies of his predecessor, President Donald Trump.

“I look forward to working with leaders in the House and Senate to address the wrongdoings of the past administration and restore justice, humanity, and order to our immigration system,” Biden said in a statement.

“This is an important first step in pursuing immigration policies that unite families, grow and enhance our economy, and safeguard our security,” the president said. “These are not Democratic or Republican priorities – but American ones.”

From ‘illegal immigrants’ to ‘noncitizens’

The U.S. Citizenship Act of 2021 has three components, aimed respectively at illegal or undocumented immigrants, immigrant agricultural workers and recipients of the Deferred Action for Childhood Arrivals (DACA) program, and the introduction of technology to patrol American borders. Raul Ruiz, Chairman of the Congressional Hispanic Caucus, said that they would be working towards passing the bills before April.

Under the Act, undocumented or illegal aliens would only be referred to as “noncitizens.” They would receive a 5-year temporary status, after which they would be eligible to apply for a 3-year green card and then citizenship following that period.

The program would apply only to aliens present in the US on or before Jan. 1, 2021, while farmworkers and DACA recipients assigned a temporary protected status as of Jan. 1, 2017, would be eligible to apply for a green card directly.

The Farm Workforce Modernization Act seeks to create a pathway that legalizes immigrant farmworkers’ citizenship and modifies the existing H2A visa program for agricultural workers. The Dream and Promise Act is a citizenship pathway targeted at DACA recipients, which refers to people who came into the country illegally as children and were allowed to stay.

The bill faces strong opposition from Republican Party members. Senate GOP leader Mitch McConnell slammed the proposal, warning that it would only continue to incentivize  waves of illegal immigration to the United States . Republican Senator Lindsey Graham has suggested a more limited version of the bill, focusing on citizenship for DACA recipients.

The proposal’s aim to grant status to 11 million or more immigrants in the country at a time when more than 10 million Americans are unemployed due to the COVID-19 pandemic also stands against the bill’s passage.

Wariness about the legislation crosses partisan lines. Democrat lawmakers in states like Texas, a key destination for illegal entry via the Mexican border,  have voiced concern about the White House’s immigration agenda. New migrants typically offer cheaper labor, driving down incomes for millions of Americans, particularly Hispanic Americans or those lawfully present in the country.

Democrat Representative Vicente Gonzalez told Politico that “the way we’re doing it right now is catastrophic and is a recipe for disaster in the middle of a pandemic… Our party should be concerned. If we go off the rails, it’s going to be bad for us… Biden is going to be dealing with a minority in Congress if he continues down some of these paths.”

A Washington Post poll conducted last April found that 69 percent of Hispanics supported temporarily blocking all immigration into the U.S. during the pandemic.